The Bread Code Tells You When a Loaf Was Baked 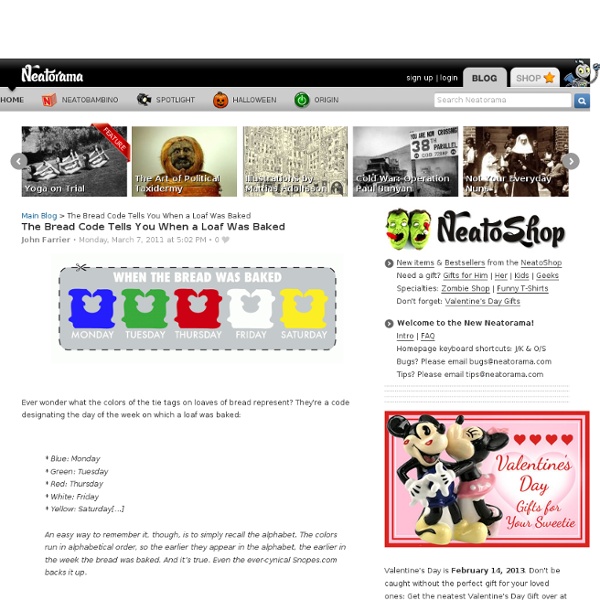 Ever wonder what the colors of the tie tags on loaves of bread represent? They're a code designating the day of the week on which a loaf was baked: * Blue: Monday * Green: Tuesday * Red: Thursday * White: Friday * Yellow: Saturday[...]An easy way to remember it, though, is to simply recall the alphabet. The colors run in alphabetical order, so the earlier they appear in the alphabet, the earlier in the week the bread was baked. Link via First Things | Image: Paul Michael

Norman the Briard's new take on shaggy dog stories as he takes his scooter for a spin By Daily Mail Reporter Updated: 05:39 GMT, 10 March 2011 As shaggy dog stories go, the one about Norman the very bright Briard who is a wizz riding his scooter ranks high on the list. The clever canine, who lives with the Cobb family in Canton, Georgia, competes in many obedience competitions and received his Companion Dog Title at just 15 months of age after four first place finishes. Scroll down for video Norman gets his foot up on the scooter and prepares himself for the off But it's his razor scooter that has remained the pooch's passion since he was a mere pup when his owner, Karen Cobb, took him out for his first spin. 'He began playing with the kid's scooter in the backyard and we thought it would be fun to give him a ride on it,' says Karen. His scooting antics have already made him popular on the Internet, and his Facebook page has quite a following. Let's get this show on the road: Norman puts his back into it

Techniques Every Cook Should Know Breading This easy, three-step technique ensures an even crumb coating. It's commonly used on thin cuts of chicken, pork or veal that will be fried or baked. To begin, set up your breading station. Fill the first of three shallow dishes with flour. In the second dish, make an egg wash by whisking eggs with a little bit of water, milk or other liquid or seasoning. Start by dredging a piece of meat in the flour. The second step is to dip the meat into the egg wash, again letting the extra drip off. Try to work with one hand as you complete the process, so as not to bread your fingers on both hands - that can lead to a sticky mess. Proceed with the recipe as directed. Browning/Searing Myths abound about the benefits of searing, most notably that it seals in the juices. The most important factor in this technique is to start with a very hot pan. Place your ingredient directly into the pan. Dicing an onion If done properly, dicing an onion is very simple. Next make horizontal cuts. Folding

Music Theory For Dummies Cheat Sheet Cheat Sheet If you're trying to learn how to play music, read music, or brush up on improvising and performing with other musicians, music theory is important. However, you don't need to know every last tidbit that the many theorists around the world have written down. You just need to become familiar with some of the basics. You need to know the names of the notes, and you must understand time signatures, intervals, and chord progressions. Note Names in the U.S. and U.K. In the world of music, you may encounter different names for the many notes used. Extending Notes with Dots and Ties All notes have a certain value, indicated by the size and shape of the note, that determines how long a pitch should be held by the voice or an instrument. Augmentation dot: This dot indicates that a note's value is increased by one half of its original value. Understanding Simple and Compound Time Signatures Measuring the Distance between Pitches with Intervals Creating Music with Chord Progressions

The Deepest Pool in the World The deepest swimming pool in the world is located in Brussels, Belgium inside a recreational diving center and anyone can use it provided they are accompanied by a professional diver. With a depth of 33 meters (108 ft) the pool contains several submerged structures offering a variety of diving opportunities. Top 10 Basic Cooking Tricks Food This is a first for the List Universe – a cooking topic. This list will teach you 10 very basic cooking tips to guarantee restaurant level perfection every time. The basis for most of these methods is from the French technique. 1. The perfect hard-boiled egg should have a moist and bright center – it should not be pale yellow and powdery and there should definitely be no signs of green around it (this signifies overcooking). To perfectly boil an egg, you need a pot which is large enough to hold the number of eggs you want to cook without them touching – but do not let it be so big that the eggs can move around the pot. 2. The best type of scrambled eggs, in my opinion, is French style – the French style is much more like a sauce than the English style which is usually dry. In a large pot put a knob of butter (between 25-40 grams) and turn the heat on low. 3. There is really only one rule with an omelette – it must not brown. 4. 5. 6. 7. 8. 9. 10. Jamie Frater

Reflexology eBook: Moss Arnold: Amazon.co.uk: Kindle Store Product Description Reflexology – Basics of the Middle Way answer the questions to the mystery surrounding the science and art of reflexology. Moss Arnold, the acclaimed originator and presenter of Chi-reflexology covers the basics of his approach to reflexology as well as beginning the process of establishing a solid foundation upon which reflexology can stand through a re-examination of the theory and practice. About the Author Moss Arnold, BA, Dip. 10 More Terrifying and Mysterious Creatures Mysteries Here are ten of the most terrifying and bizarre creatures to ever, allegedly, have walked the Earth. These creatures defy logic, inspire the imagination and generate fear. This creature was sighted on three separate occasions in the town of Dover, Massachusetts, on April 21 and April 22, 1977. This beast is said to have inhabited the Pine Barrens of Southern New Jersey, with tales beginning in the 1800s and continuing until the 20th century. It is claimed that the Flatwoods Monster is some form of extraterrestrial, as this creature was spotted in the vicinity of a large UFO that either hovered above or rested on the ground in the town of Flatwoods, in Braxton County, West Virginia, on September 12, 1952. Mawnan, Cornwall – 1976. Lizard Man of Scape Ore Swamp The Lizard Man, being particularly terrifying, deserves a high place on this list. For those who grew up in Australia, the bunyip will be familiar.

How to Make Homemade Beef Jerky Beef jerky can be a nearly perfect snack nutritionally but it’s expensive and making your own requires special equipment like a dehydrator. Until now. We show you how to get great tasting beef jerky with the stuff you’ve already got in your kitchen. Growing up in Central Pennsylvania, I’m no stranger to homemade jerky. Jerky is one of the healthier foods you can snack on if you get a brand not loaded with preservatives and salt. And considering what we know about carbs , the importance of protein and the ‘undemonization’ of fats, it all adds up to jerky being a hell of a food. As much as I love jerky, it can quickly become expensive with a 3 oz bag easily costing $5 to $6 and the thought of making my own was tainted with tales of hours of prep and the aid of a high-priced dehydrator. So imagine my delight and skepticism when I ran across a small blurb in Men’s Health claiming jerky could be made at home simply and with no expensive tools. What you’ll need: How to Make Homemade Beef Jerky