The Mixed-Up Brothers of Bogotá 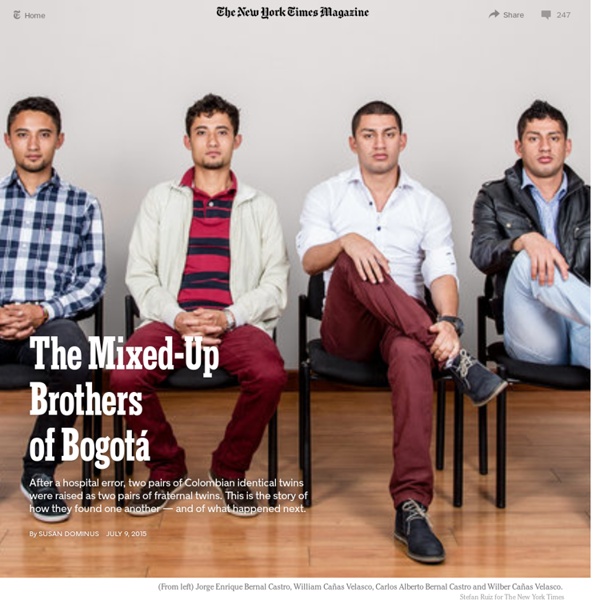 Leer en español The Beginning They were two pretty young women in search of pork ribs for a barbecue later that day, a Saturday in the summer of 2013. Janeth Páez suggested that they stop by a grocery store not far from where her friend Laura Vega Garzón lived in northern Bogotá. Janeth’s boyfriend’s cousin, William, a sweet young man with a thick country accent, worked behind the butcher counter there, expertly filleting beef and cutting pigs’ feet that his customers liked to boil with beans. Janeth was sure he would give her and Laura a cut rate on the ribs. As Laura walked into the grocery store, catching up with Janeth, she was surprised to spot someone she knew. ‘‘Oh, no, that’s William,’’ Janeth said. ‘‘No, it’s Jorge — I know him,’’ Laura said. Laura was baffled: Why was Jorge pretending to be someone else? The following Monday at Strycon, Laura told Jorge about her funny misunderstanding with his double at the butcher counter. Continue reading the main story Slide Show Photo

A new study of chimps may suggest our love of cooking has deeper roots than we ever thought. People LOVE to cook. A lot. Like, a lot a lot. "NOTHING makes me happier than watching my BF flip veggies. Except maybe this polo shirt." All images via Thinkstock. Hemp-Based Batteries Could Change The Way We Store Energy Forever Source: www.preventdisease.com | Original Post Date: August 18, 2014 – As hemp makes a comeback in the U.S. after a decades-long ban on its cultivation, scientists are reporting that fibers from the plant can pack as much energy and power as graphene, long-touted as the model material for supercapacitors. They’re presenting their research, which a Canadian start-up company is working on scaling up, at the 248th National Meeting & Exposition of the American Chemical Society (ACS), the world’s largest scientific society. Although hemp (cannabis sativa) and marijuana (cannabis sativa var. indica) come from a similar species of plant, they are very different and confusion has been caused by deliberate misinformation with far reaching effects on socioeconomics as well as on environmental matters. Hemp is the most universally useful plant we have at our disposal. The history of mankind’s use of hemp can be traced way back in time to between about 5000 – 7000 BC.

Why dolphins are deep thinkers At the Institute for Marine Mammal Studies in Mississippi, Kelly the dolphin has built up quite a reputation. All the dolphins at the institute are trained to hold onto any litter that falls into their pools until they see a trainer, when they can trade the litter for fish. In this way, the dolphins help to keep their pools clean.

I Had No Idea That THIS Could Cause Back Pain, But Now My Whole Life Has Changed! Life can sometimes be an emotional roller coaster. Some days you’re up and some days you’re down. But I was shocked to discover that the emotions you feel and the thoughts you think can have a direct impact on your physical health. According to Dr. Susanne Babbel, a psychologist specializing in trauma and depression writes in Psychology Today, “Studies have shown that chronic pain might not only be caused by physical injury but also by stress and emotional issues.” She goes on, “Often, physical pain functions to warn a person that there is still emotional work to be done.” evolution - Why did humans lose their fur? This is an interesting question, and there are a number hypotheses available to explain this phenomenon. The short answer (as far as I can say this after my literature search) is that we don't know the answer for sure. The long version follows below. The main problem with all these hypothesis is that they have some valid point, but a definitive hasn't been given yet.

The end of capitalism has begun The red flags and marching songs of Syriza during the Greek crisis, plus the expectation that the banks would be nationalised, revived briefly a 20th-century dream: the forced destruction of the market from above. For much of the 20th century this was how the left conceived the first stage of an economy beyond capitalism. The force would be applied by the working class, either at the ballot box or on the barricades. The lever would be the state. The opportunity would come through frequent episodes of economic collapse. Instead over the past 25 years it has been the left’s project that has collapsed. There Is No Joy like Malicious Joy: Schadenfreude in Young Children Human emotions are strongly shaped by the tendency to compare the relative state of oneself to others. Although social comparison based emotions such as jealousy and schadenfreude (pleasure in the other misfortune) are important social emotions, little is known about their developmental origins. To examine if schadenfreude develops as a response to inequity aversion, we assessed the reactions of children to the termination of unequal and equal triadic situations. We demonstrate that children as early as 24 months show signs of schadenfreude following the termination of an unequal situation. Although both conditions involved the same amount of gains, the children displayed greater positive expressions following the disruption of the unequal as compared to the equal condition, indicating that inequity aversion can be observed earlier than reported before. Figures

When David Beats Goliath: The Advantage of Large Size in Interspecific Aggressive Contests Declines over Evolutionary Time Body size has long been recognized to play a key role in shaping species interactions. For example, while small species thrive in a diversity of environments, they typically lose aggressive contests for resources with larger species. However, numerous examples exist of smaller species dominating larger species during aggressive interactions, suggesting that the evolution of traits can allow species to overcome the competitive disadvantage of small size. Will Your Job Be Done By A Machine? : Planet Money Machines can do some surprising things. But what you really want to know is this: Will your job be around in the future? We have the "definitive" guide. What job is hardest for a robot to do?

Evolutionary developmental biology Advertisement advanced search Browse Subject Areas: Evolutionary developmental biology Showing 1 - 13 of 84 Chapter 9 – The Vatican Rules the World The Vatican Rules the World: The Rothschild Connection For anyone not to believe that this 2,000 year old body with vast holdings in gold, art, real estate, multinational corporations and most importantly, knowledge, is not the most powerful institution in the world, cannot be thinking straight. The following article sheds light on the power of the Vatican, and the influential rankings of the Rothschild family and the Windsor queen. You should be aware that the current head of the Rothschild dynasty is Baron David Rene James de Rothschild. He is married to the reclusive Princess Olimpia Anna Aldobrandini.

Modifications to the Aesop's Fable Paradigm Change New Caledonian Crow Performances While humans are able to understand much about causality, it is unclear to what extent non-human animals can do the same. The Aesop's Fable paradigm requires an animal to drop stones into a water-filled tube to bring a floating food reward within reach. Rook, Eurasian jay, and New Caledonian crow performances are similar to those of children under seven years of age when solving this task.