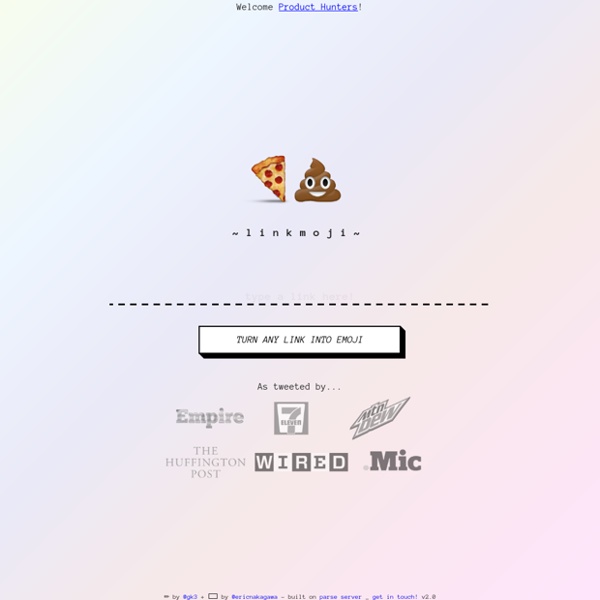 How emoji conquered the world In 1995, sales of pagers were booming among Japan’s teenagers, and NTT Docomo’s decision to add the heart symbol to its Pocket Bell devices let high school kids across the country inject a new level of sentiment (and cuteness) into the millions of messages they were keying into telephones every day. Docomo was thriving, with a bona fide must-have gadget on its hands and market share in the neighborhood of 40 percent. But when new versions of the Pocket Bell abandoned the heart symbol in favor of more business-friendly features like kanji and Latin alphabet support, the teenagers that made up Docomo’s core customer base had no problem leaving for upstart competitor Tokyo Telemessage.

econsultancy You don’t need to be a seasoned data scientist or have a degree in graphic design in order to create incredible data visualisations. It has become a lot simpler to mine your data and interpret your insights in an engaging, attractive, and most importantly easy to understand way. This is a list of various different free and premium tools and platforms available which will allow you to communicate data in a variety of different formats, from interactive charts, to infographics, to maps, to word clouds. Not all will be suitable for your particular data set or your audience, but its certainly worth experimenting with a few to seek out the most relevant. Hopefully you’ll not only learn some new skills and find some new creative tools, but also learn something about your own data.

2015: The Year of Emoji Diversity The Unicode Consortium has released a technical report which details a method for representing a range of skin tones in emoji. Guidelines have previously suggested that emoji people be “as neutral as possible regarding race, ethnicity, and gender”. Basically, if the character name calls for a specific gender (Princess) or accessory (Man With Turban), then it should be included. Make your own information booklets for your Midori Traveler's Notebook One of the benefits of owning a notebook system that accommodates multiple booklets is that not all of them have to be notebooks. With the templates I am releasing today it is a simple matter to use your own content to print and bind information booklets on any topics of your choice. My templates are set up ready for you to paste in your own material, which could be text, pictures or anything you want. There are three different templates for you to choose from: Information booklet template - full size - this produces a booklet measuring 210mm x 110mm, compatible with the regular Midori Traveler's Notebook Information booklet template - FN size - this produces a booklet measuring 140mm x 90mm, the same as a Field Notes book or a Moleskine Pocket Cahier.

Emoji A sample of Emoji from Google's "Hangouts" in a previous version of the app The exact appearance of Emoji is not prescribed but varies between fonts, in the same way that normal typefaces can display a letter differently. For example, the Apple Color Emoji typeface is proprietary to Apple, and can only be used on Apple devices. Different computing companies have developed their own fonts to display emoji, some of which have been open-sourced to permit their reuse.[6][7] Both colour and monochrome emoji typefaces exist, as well as at least one animated design.[8] History[edit] My Must-Have iPhone Apps, 2014 Edition For the past four years, I’ve been running a series called My Must-Have Apps that, once a year, collects all the apps I find indispensable to get work done on my iPhone, iPad, and Mac. Considering changes to my daily life and workflow, this year only features my must-have iPad and iPhone apps. The iPhone has changed my professional life, and it’s a powerful and essential pocket computer that I carry with me all the time. But I prefer to get work done on my iPad.

Pink Slip Emoji? Houston Rockets Fire Social Media Manager After Controversial Tweet The NBA’s Tuesday night emoji controversy spilled into Wednesday. The Houston Rockets, whose Twitter account posted a tweet that got everyone’s attention during Game 5 of a Western Conference first-round series against the Dallas Mavericks, fired the person who ran the account. On the day after the tweet in question — which was subsequently deleted — the Rockets dismissed their digital communications manager Chad Shanks, whose attempt at damage control was as good as one could have expected, given the situation. Those attempts obviously weren’t good enough for the Rockets, whose decision was documented in this brief story by the Houston Chronicle. Here’s a brief recap of the story as it unfolded on Tuesday night, when it was beginning to become apparent that the Rockets were going to win Game 5 and eliminate the Mavericks from the playoffs, four games to one: Very simply, the Rockets’ Twitter account posted the following tweet, with a gun emoji pointed at a horse emoji:

2014 Recap: 15 Top Resources On Digital Citizenship Via Edudemic A lot of the facts you teach your students will be long forgotten by the time they reach graduation, but the hope is that the practical lessons — the ones that can benefit them for years to come — are the ones that will stick. Digital citizenship is something that can equip students for a lifetime of safe, responsible Internet use.

The Rapid Evolution of Emoji, a Wordless Tongue The rapid evolution of a wordless tongue. Illustration by Zohar Lazar Consider the tilde. There it is, that little squiggle, hanging out on the far-upper-left-hand side of your ­computer keyboard. 10 Essential Imaging Tools For Successful Bloggers Blog posts with images get 94% more views, and visuals increase both the time spent on posts and social shares… So why are so many bloggers resistant to tools for image creation and data visualization? The main reason is that they don’t know where to start. Imaging tools can seem overwhelming to bloggers, especially if your main art is content and writing. The good news is that they don’t have to be. Here are 10 tools you can start using today to make your blog look better while increasing social engagement.

Guess The Emoji Are you ready for a guessing game like none other?!The ONE AND ONLY Guess The Emoji will entertain you for hours! Our kid and family friendly game tests your logic and reasoning skills to solve simple (and sometimes hard!) Emoji puzzles! The Best Online Tools To Know Everything About a Website 02 Apr 2014 The best online tools to know anything and everything about websites including their hosting providers, DNS information, owner details and more. couch mode print story How do I contact the owner of a website? Where is a particular website hosted?

92 Teen Text Terms Decoded for Confused Parents Not so long ago, most teenagers’ text messages read to other people like a jumble of seemingly disconnected letters, numbers, and odd punctuation. Using a combination of shortened words, creative spellings, and a liberal sprinkling of unusual punctuation, teen text message mavens created their own form of language — so-called text speak (a term itself boiled down to “txtspk”). These days, teens are texting more than ever, but the advent of QWERTY smartphone keyboards, predictive text, autocorrect, and the removal of message character limits should allow young social butterflies the opportunity to type full, real words.