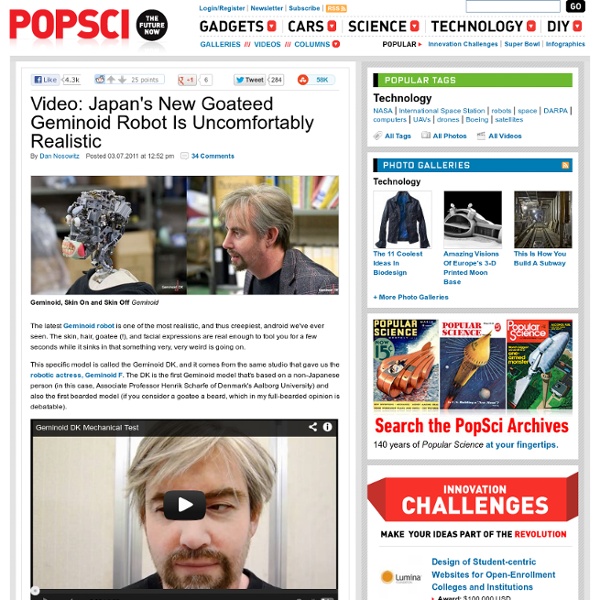 Actroid F Female Telepresence Robot Looks Super Real, Creepy Actroid F can speak in your place, using webcams to watch and mimic your facial expressions and movements. When you speak with your family over a webcam they may be able to see your face, but they don’t have a real body in the room with which they can interact. Why not give them a creepy robot to to talk to instead? Actroid F is a modified version of the Geminoid F female robot that we discussed earlier. This video was taken during the recent open lab at AIST on October 14th and 15th. This preview for Actroid F came out a few months ago, and you can tell they’ve made some fine adjustments since then. Japan has a sort of developmental alliance/network that has repeatedly pushed the envelope when it comes to life-like humanoid robots. Actroid F is based on the frame and skin of Geminoid F seen here. Of course, they’re creepy in a progressively realistic way, and that may be the key. From a certain angle, Actroid F really does look human. [sources: Robo Times, Kokoro]

Aussies make supercomputer breakthrough AUSTRALIAN SCIENTISTS SAY THEY are coming first in a global race to create a new breed of supercomputers set to transform the way we live. "We expect quantum computers will be able to perform certain tasks much faster than normal computers, such as searching databases, modelling complex molecules or developing new drugs. They could also crack most modern forms of encryption," says lead researcher Professor Andrew Dzurak at the University of Sydney. Fully functional quantum computers are still years away, but a group led by Dzurak have notched up an important win after 10 years of toil. Silicon is important because it is the primary atom used in standard computers, meaning it will be much easier and simpler to mass produce. A new type of internet "After a decade of work trying to build this type of single atom qubit [quantum bit] device, this is a very special moment," says Andrew.

Mind-controlled prosthetics to help amputees - health - 28 April 2011 ROBOTIC limbs controlled solely by the mind could be available to paralysed people within a year. Monkeys are being trained to control what might be the world's most sophisticated and human-like robot arm. But they never touch the prosthetic limb or fiddle with a remote control: they guide it with their thoughts alone. If trials are successful, in a few months from now people with spinal cord injuries could learn to do the same. In 2008, Andrew Schwartz of the University of Pittsburgh in Pennsylvania published a landmark paper describing how two rhesus macaques learned to feed themselves marshmallows and fruit using a crude robotic limb controlled by electrodes implanted in their brains (Nature, DOI: 10.1038/nature06996). No brain-controlled prosthetic limb had ever carried out a more complex real-world task. Enter the Modular Prosthetic Limb (MPL), a bionic limb that closely approximates the form and agility of a human arm and hand. New Scientist Not just a website! Promoted Stories

Men: Pee And Wash In The Same Fixture! Lenny Bruce would have had such fun with this, but this just makes so much sense, a sink built on top of a urinal! And designer Yeongwoo Kim has made it look good, too. The theoretical sequence is that you use the urinal, then wash your hands and the washwater rinses the urinal, saving water. Since of course, everybody washes their hands after peeing, right? It makes even more sense in multiple units in mens rooms, saving both space and water. According to Yanko, it is a iF Concept Design 2010 winning entry. The designer writes on his website: To save water, Eco Urinal is designed to use the water that was used for washing hands to flush the urine. This in some ways makes more sense than a waterless toilet and probably saves as much water. More on urinals:No Splash, No Flush Urinals from KohlerWaterless Urinals Introduced for Home UseUrinals Disguised as Trash Cans: Everyday Objects vs Anti-Social BehaviorPee in Style and Save WaterPopup Pissoir Solves Wee Problem

1,000 Core CPU Achieved: Your Future Desktop Will Be a Supercomputer Scientists at the University of Massachusetts Lowell laugh in the face of Intel's weedy handful of cores in its new CPU lineup: They've just squeezed over a thousand processor cores onto a single chip. We've heard a lot about the potential for future desktop-sized supercomputers, but more than anything else this research proves that in the not-too-distant future it's likely to be a reality. Interestingly enough, there's also a green angle to this idea: FPGA chips can be more power efficient than their competitors, and if less computer time is needed to process complex tasks, then the overall power consumption of computers using the tech could be impressively low. The advance was made by Dr.

TI's Chips Will Make 2012's Tablets Real-Time 3-D Supercomputers Texas Instruments has just outed a chip well ahead of its 2012 availability date, but it's such a hot ticket item it's worth knowing about--because it may enable your tablet PCs of next year to surpass your laptops of this year, with whizbang features like real-time 3-D video. The OMAP 5 chip packs two ARM Cortex A15 cores inside (a tech we've covered before) running at up to 2GHz. So right from the start it'll outperform the single-core 1GHz chips inside the current crop of tablet PCs--including the Cortex A8-based iPad--as well being twice as fast as upcoming A9-based tablets, which may include the iPad 2. But enough about the tech. What'll it let your 2012/2013 tablets do? TI also notes the chip enables "24-megapixel imaging" which would (shoved into a big smartphone or pocket tablet, along with the right lens technology) deal a serious death-blow to the compact digital camera market.

Light Touch projector makes any surface a touchscreen A previously little-known company from the UK called Light Blue Optics has demoed a projector at CES which allows users to interact with the light image as if it were a touchscreen. The Light Touch throws a 10-inch image at WVGA resolution at incredibly short distances thanks to the holographic projection technology involved. At the same time the infra-red touch sensitive system allows users to interact with social networks, multimedia sharing and any other applications that can use the Wi-Fi or Bluetooth support in the device to connect to the Internet. It comes with 2GB of onboard flash memory, a microSD card slot for expanding the storage and the battery life will last 2 hours. Expect to hear more from this one on the OEM front as interest grows. UPDATE: Two years on and although Light Blue Optics doesn't seem to have come up with the goods, others have. - Prodigy projection keyboard iPhone case turns any surface into a keyboard

Amp Up a Laser Pointer From Wired How-To Wiki Illustration by Lab Partners Your laser pointer could be doing so much more than highlighting PowerPoint slides and blowing your cat's mind. It could be sculpting ice, sparking campfires, or searing one bad mofo on your leather jacket. Here's how to give a standard pointer a power upgrade. This article is a wiki. 1 Disassemble the unit by removing the batteries, opening the housing, and taking out the laser module. 2 Search the circuit board for a variable resistor. 3 To intensify the beam, use a small screwdriver to gently tighten the resistor. 4 Reassemble and aim your potent pointer at safe targets like ice, wood, or plastic. Contributed by Terrence Russell

Nanowire battery can hold 10 times the charge of existing lithium-ion battery Stanford Report, December 18, 2007 Courtesy Nature Nanotechnology Photos taken by a scanning electron microscope of silicon nanowires before (left) and after (right) absorbing lithium. Both photos were taken at the same magnification. The work is described in “High-performance lithium battery anodes using silicon nanowires,” published online Dec. 16 in Nature Nanotechnology. Stanford researchers have found a way to use silicon nanowires to reinvent the rechargeable lithium-ion batteries that power laptops, iPods, video cameras, cell phones, and countless other devices. The new technology, developed through research led by Yi Cui, assistant professor of materials science and engineering, produces 10 times the amount of electricity of existing lithium-ion, known as Li-ion, batteries. "It's not a small improvement," Cui said. The greatly expanded storage capacity could make Li-ion batteries attractive to electric car manufacturers. Cui's battery gets around this problem with nanotechnology.

The Robopocalypse Cometh: IBM's Cyberbrain Smart as a Cat, Getting Smarter If the Matrix or I, Robot's view of artificial intelligence sent chilly shivers down your spine, then prepare for frostbite: IBM's artificial brain is now as smart as a cat--just a stop or two down the line from human powers. Speaking at the SC09 high-performance computing conference this week, IBM representatives from the cognitive computing team will be unveiling all the technical details behind their successes with large-scale cortical simulation and brain-like emulation. But it boils down quite neatly to news that the team has, for the first time, performed an in-computer simulation of a brain's workings at a near-instantaneous speed. The magic is all done in software, with particularly clever program elements that emulate the biochemical and electrical activity of neurons and synapses in real flesh-and-blood brains. Which is where the other bit of IBM's research comes in. Making cyberbrains more like real human ones means better understanding how our brains work. [Via VentureBeat]