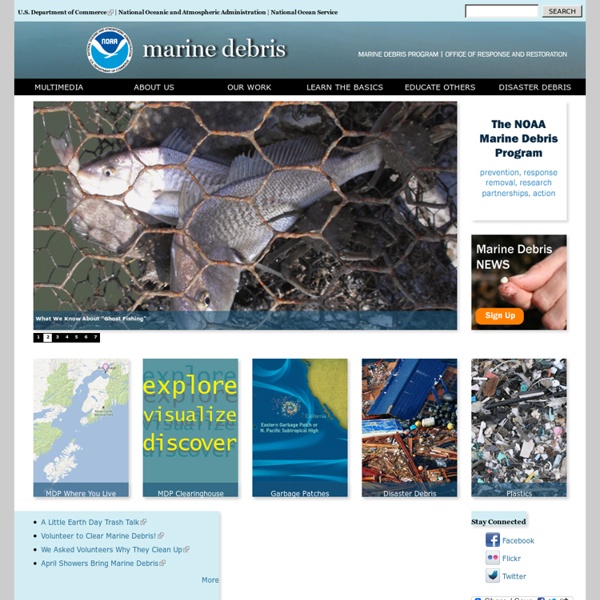 Marine problems: Pollution Seas of garbage Solid garbage also makes its way to the ocean. Plastic bags, balloons, glass bottles, shoes, packaging material – if not disposed of correctly, almost everything we throw away can reach the sea. Plastic garbage, which decomposes very slowly, is often mistaken for food by marine animals. High concentrations of plastic material, particularly plastic bags, have been found blocking the breathing passages and stomachs of many marine species, including whales, dolphins, seals, puffins, and turtles. This garbage can also come back to shore, where it pollutes beaches and other coastal habitats. Sewage disposal In many parts of the world, sewage flows untreated, or under-treated, into the ocean. This sewage can also lead to eutrophication. Toxic chemicals Almost every marine organism, from the tiniest plankton to whales and polar bears, is contaminated with man-made chemicals, such as pesticides and chemicals used in common consumer products.

Oceans, Whales & Seafood. Help protect marine life | Greenpeace Half the oxygen we breathe comes from our oceans. One of our world’s most stunning features, they cover more than 70 percent of the planet, comprise 99 percent of its habitable space, and house the greatest diversity of major plant, animal, and microbial species, from the simplest to the mightiest on earth. Their importance to all life cannot be underestimated. Oceans regulate the climate, produce half of the earth’s breathable oxygen, and are a huge source of food. And because of some pretty careless industrial human activity, our oceans are in a lot of trouble right now. We’ve made significant progress to turn the tide towards ocean conservation, but a lot more needs to be done in a short time. Ensuring Sustainable Seafood The problems taxing the ocean are caused directly by what's available at the seafood counter. Spotlight on Tuna Tuna is one of the world's favorite fish. Our appetite for tuna is pushing several species of sharks, turtles, and tuna closer and closer to extinction.

The Dirty Truth About Plastic BPA, in turn, is becoming this year’s poster child for all our doubts and fears about the safety of plastic. New research highlighting the possible dangers of BPA has received tremendous media coverage. In mice, at least, BPA exposure at crucial stages of development induces observable changes (such as breast or prostate abnormalities) that last a lifetime. The research may be confusing to a layperson, yet some consensus has been reached: Last November a panel sponsored by the National Institutes of Health (NIH) determined that there was at least “some concern” about BPA’s effect on the fetal and infant brain. What is not known is whether infants and children under 6 are even more heavily exposed, since they have not yet been studied (for phthalates, Swan says, levels are definitely higher in children than in adults). To shift public understanding on this issue is staggeringly difficult, especially given that exposure to plastic is not a matter of individual lifestyle.

Water Pollution Facts, Effects of Water Pollution, Clean Water Act Clean and plentiful water provides the foundation for prosperous communities. We rely on clean water to survive, yet right now we are heading towards a water crisis. Changing climate patterns are threatening lakes and rivers, and key sources that we tap for drinking water are being overdrawn or tainted with pollution. NRDC experts are helping to secure safe and sufficient water for people and the environment by: Promoting water efficiency strategies to help decrease the amount of water wasted;Protecting our water from pollution by defending the Clean Water Act and advocating for solutions like green infrastructure;Helping prepare cities, counties and states for water-related challenges they will face as a result of climate change; andEnsuring that waterways have enough water to support vibrant aquatic ecosystems. Protecting Clean Water Dirty water is the world's biggest health risk, and continues to threaten both quality of life and public health in the United States.