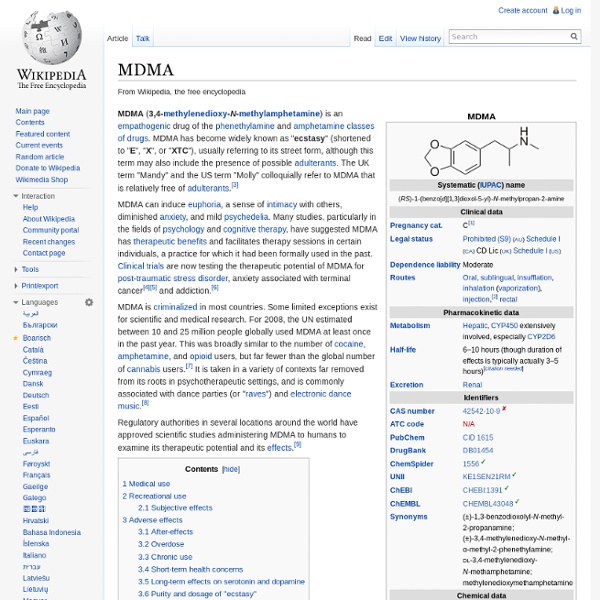 MDMA (3,4-methylenedioxy-N-methylamphetamine) is an empathogenic drug of the phenethylamine and amphetamine classes of drugs. MDMA has become widely known as "ecstasy" (shortened to "E", "X", or "XTC"), usually referring to its street form, although this term may also include the presence of possible adulterants. The UK term "Mandy" and the US term "Molly" colloquially refer to MDMA that is relatively free of adulterants.[3] MDMA can induce euphoria, a sense of intimacy with others, diminished anxiety, and mild psychedelia. Regulatory authorities in several locations around the world have approved scientific studies administering MDMA to humans to examine its therapeutic potential and its effects.[9] Medical use[edit] In the year 2000, Doctor Jose Carlos Bouso performed the first clinical trial of MDMA for use in treating Post Traumatic Stress Disorder.[16] Since 2009, two randomized, controlled trials of MDMA-assisted psychotherapy for post-traumatic stress disorder were published. Related:  Psychoactive Alkaloids • psychostimulants

Methylenedioxyethylamphetamine MDEA (3,4-methylenedioxy-N-ethylamphetamine; MDE, "Eve") is a psychedelic and entactogenic drug of the phenethylamine and amphetamine chemical classes. Like MDA, MDEA acts as a serotonin, norepinephrine, and dopamine releasing agent.[1][2][3] See also[edit] References[edit] External links[edit] Cocaine Cocaine (INN) (benzoylmethylecgonine, an ecgonine derivative) is a crystalline tropane alkaloid that is obtained from the leaves of the coca plant.[5] The name comes from "coca" and the alkaloid suffix "-ine", forming "cocaine". It is a stimulant, an appetite suppressant, and a nonspecific voltage gated sodium channel blocker, which in turn causes it to produce anaesthesia at low doses. Biologically, cocaine acts as a serotonin–norepinephrine–dopamine reuptake inhibitor, also known as a triple reuptake inhibitor (TRI). Unlike most molecules, cocaine has pockets[clarification needed] with both high hydrophilic and lipophilic efficiency, violating the rule of hydrophilic-lipophilic balance. It is controlled internationally by the Single Convention on Narcotic Drugs (Schedule I, preparation in Schedule III). Medical effects Comparison of the perceived harm for 20 popular recreational drugs from a poll among medical psychiatrists specialized in addiction treatment. Acute Chronic Addiction Forms

Heroin Heroin /ˈhɛroʊɪn/ (diacetylmorphine or morphine diacetate, also known as diamorphine (BAN, INN[4]) and commonly known by its street names of H, smack, boy, horse, brown, black, tar, and others[5] is an opioid analgesic originally synthesized by C.R. Alder Wright in 1874 by adding two acetyl groups to the molecule morphine, which is found naturally in the opium poppy. It is the 3,6-diacetyl ester of morphine. Administered intravenously by injection, heroin is two to four times more potent than morphine and is faster in its onset of action.[6] Illicit heroin is sometimes available in freebase form, dulling the sheen and consistency to a matte-white powder.[7] Because of its lower boiling point, the freebase form of heroin is also smokable. As with other opioids, diacetylmorphine is used as both a legal, medically prescribed drug (e.g., as an analgesic, cough suppressant and as an anti-diarrhea drug) and a recreational drug, in which case the user is seeking euphoria. Usage Medical use Oral

Phencyclidine In chemical structure, PCP is an arylcyclohexylamine derivative, and, in pharmacology, it is a member of the family of dissociative anesthetics. PCP works primarily as an NMDA receptor antagonist, which blocks the activity of the NMDA receptor and, like most antiglutamatergic hallucinogens, is significantly more dangerous than other categories of hallucinogens.[1][2] Other NMDA receptor antagonists include ketamine, tiletamine, dextromethorphan and nitrous oxide. As a recreational drug, PCP may be ingested, smoked, inhaled or injected.[3] Biochemistry and pharmacology[edit] Pharmacodynamics[edit] PCP is well known for its primary action on ionotropic glutamate receptors, such as the NMDA receptor in rats and in rat brain homogenate.[4][5] As such, PCP is an NMDA receptor antagonist. Research also indicates that PCP inhibits nicotinic acetylcholine (nACh) receptors. Studies on rats indicate that PCP indirectly interacts with endorphin and enkephalin receptors to produce analgesia. [11] Notes

3,4-Methylenedioxyamphetamine Medical use[edit] There are no currently accepted medical uses for MDA. However, researchers have investigated many possible uses in the past. It was first ingested in July 1930 by Gordon Alles who then licensed the drug to Smith Kline and French.[1] MDA was first used in animal tests in 1939, and human trials began in 1941 in the exploration of possible therapies for Parkinson's disease. From 1949 to 1957, more than 500 human subjects were given MDA in an investigation of its potential use as an antidepressant and/or anorectic by Smith, Kline & French. The United States Army also experimented with the drug, code named EA-1298, while working to develop a truth drug or incapacitating agent. Recreational use[edit] MDA began to appear on the recreational drug scene around 1963 to 1964. Effects[edit] The MDA molecule A recreational dose of MDA is commonly between 100 and 160 mg. MDA is said to share the entactogenic effects of MDMA. References[edit] External links[edit]

Mirtazapine Mirtazapine (brand names: Avanza, Axit, Mirtaz, Mirtazon, Remeron, Zispin)[6] is a noradrenergic and specific serotonergic antidepressant (NaSSA) introduced by Organon International in the United States in 1996,[2] and is used primarily in the treatment of depression. It is also commonly used as an anxiolytic, hypnotic, antiemetic, and appetite stimulant. In structure, mirtazapine can also be classified as a tetracyclic antidepressant (TeCA) and is the 6-aza analogue of mianserin.[6] It is also racemic - occurs as a combination of both R and S-stereoisomers.[6] Its patent expired in 2004, so generic versions are available.[7] §Medical uses[edit] §Approved and off-label[edit] Mirtazapine's primary use is the treatment of major depressive disorder and other mood disorders.[8][9] However, it has also been found useful in alleviating the following conditions and may be prescribed off-label for their treatment: §Investigational[edit] §Feline[edit] §Efficacy and tolerability[edit] §[edit] Headache

Crack - Crack cocaine Crack cocaine ‘rocks’. Appearance and characteristics In purer forms, crack rocks appear as off-white nuggets with jagged edges,[3] with a slightly higher density than candle wax. Purer forms of crack resemble a hard brittle plastic, in crystalline form[3] (snaps when broken). A crack rock acts as a local anesthetic (see: cocaine), numbing the tongue or mouth only where directly placed. Crack cocaine as sold on the streets may be adulterated or "cut" with other substances mimicking the appearance of crack cocaine to increase bulk. Chemistry In order for cocaine (in plastic bag at bottom) to be converted to crack, several supplies are needed. A close up of the "cooking" process that creates crack. Sodium bicarbonate (NaHCO3, common baking soda) is a base used in preparation of crack, although other weak bases may substitute for it. Coc-H+Cl− + NaHCO3 → Coc + H2O + CO2 + NaCl With Ammonium bicarbonate: Coc-H+Cl− + NH4HCO3 → Coc + NH4Cl + CO2 + H2O With Ammonium carbonate: Psychological effects