The Language of Choice and Support 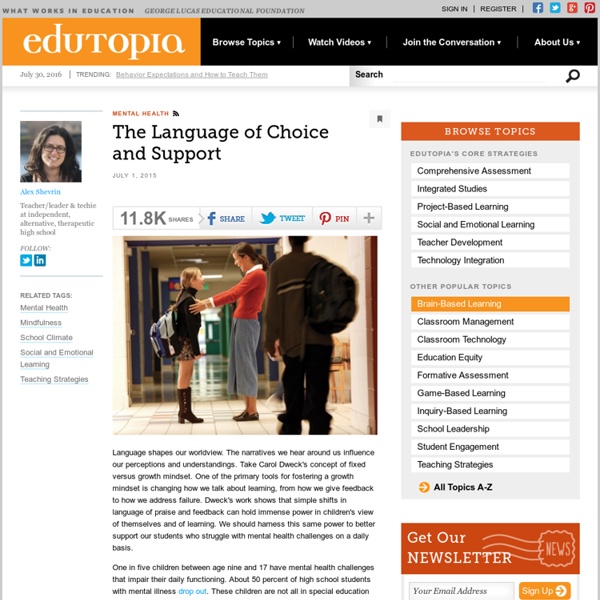 Language shapes our worldview. The narratives we hear around us influence our perceptions and understandings. Take Carol Dweck's concept of fixed versus growth mindset. One of the primary tools for fostering a growth mindset is changing how we talk about learning, from how we give feedback to how we address failure. Dweck's work shows that simple shifts in language of praise and feedback can hold immense power in children's view of themselves and of learning. One in five children between age nine and 17 have mental health challenges that impair their daily functioning. Breaking Bad Habits: Changing Unintentionally Stigmatizing Language Stigma is powered by language. We should use language that accurately describes what we're trying to say, rather than falling back on figures of speech that may fuel negative attitudes toward those with mental health challenges. I can also avoid minimizing when I ask more questions to try to accurately describe a student who is struggling. Related:  Choice

Step by Step: Designing Personalized Learning Experiences For Students The phrase “personalized learning” gets tossed around a lot in education circles. Sometimes it’s used in the context of educational technology tools that offer lessons keyed to the academic level of individual students. Other times it’s referring to the personal touch of a teacher getting to know a student, learning about their interests and tailoring lessons to meet both their needs and their passion areas. As with most education jargon, the phrase isn’t fixed, but it usually connects to the idea that not all students need the same thing at the same time. It implies choice, multiple pathways to learning, many ways to demonstrate competency and resists the notion that all students learn the same way. Educator Mia MacMeekin has put together a clear infographic highlighting some of the ways teachers design “personalized” curriculum.

Are Your Choices Good Enough? - Michelle McQuaid Are you worried that you’ll make the wrong choice today? It might be a decision that is life changing – like to stay or leave your current job – or something must simpler – like which route will be the fastest way to get work. But with more information available to us than ever before, the truth is that it’s become increasingly difficult to feel confident that we’re making the right choices and studies suggest that this is impacting our happiness and wellbeing. “The fact that some choice is good and gives you a feeling of freedom and power, doesn’t necessarily mean that more choice is better,” said Barry Schwartz, from Swarthmore College and author of The Paradox of Choice when I interviewed him recently. Barry suggests that the key is understanding how much freedom of choice serves you well in different situations. If you’re out to get the best outcome from whatever decision you’re making, then you need to examine all of your options. What choices will you make today?

The Myth of 'I'm Bad at Math' - The Atlantic “I’m just not a math person.” We hear it all the time. And we’ve had enough. Because we believe that the idea of “math people” is the most self-destructive idea in America today. The truth is, you probably are a math person, and by thinking otherwise, you are possibly hamstringing your own career. Is math ability genetic? How do we know this? Different kids with different levels of preparation come into a math class. Thus, people’s belief that math ability can’t change becomes a self-fulfilling prophecy. The idea that math ability is mostly genetic is one dark facet of a larger fallacy that intelligence is mostly genetic. A body of research on conceptions of ability has shown two orientations toward ability. The “entity orientation” that says “You are smart or not, end of story,” leads to bad outcomes—a result that has been confirmed by many other studies. You have a certain amount of intelligence, and you really can’t do much to change it. The results? So why do we focus on math? 1.

What to Do When You Have Too Many Ideas (And Not Enough Time) What do you do when you have too many ideas and not enough time? Or similarly, what about when you have too many tasks and not enough energy? As an entrepreneur, I feel like I've been battling this issue for awhile. There is always another opportunity to chase or a new product idea that sounds exciting. However, during a recent conversation with Travis Dommert, I learned about a new strategy for dealing with the issue of having too many ideas and projects. It all comes down to treating your life like a rose bush. Let me explain what Travis taught me… Before we talk about how to get started, I wanted to let you know I researched and compiled science-backed ways to stick to good habits and stop procrastinating. Ideas are Like Rose Buds As a rose bush grows it creates more buds than it can sustain. You see, a rose bush isn’t like a tree. Ideas are like rose bushes: they need to be consistently pruned and trimmed down. Just like the rose bush, we face constraints in our lives. The Bottom Line

Growth Mindset Albert Einstein is considered one of the greatest geniuses of all time, though rumor has it he failed high school calculus. As you might imagine, this is an exaggeration ‒ Einstein didn’t remember getting anything but A’s. It’s possible that this story had something to do with his math skills. Despite his amazing intellect, Einstein wasn’t as strong in math as many of the other physicists of his day. Throughout his life, he was known to have frequently said, “If I could just do the math.” At the age of 76, Einstein passed away. The greatest genius of his day ‒ and arguably in history ‒ understood that life is a process. We’re all born with certain skills, but the mindsets we have toward improving our skills and character ultimately determine our success in life. Einstein’s theories were the crowning achievements of his life. In her groundbreaking work, Mindset, Carol Dweck presents the “growth mindset” as the most essential element of success and happiness in life.

Your First Choice is Rarely the Optimal Choice: 5 Lessons on Being Wrong As a rule, we are incredibly hard on ourselves when it comes to making big decisions in life. If our first five relationships end with a break up, we think we’re destined to be alone forever.If we go to school, get a degree, and spend years training for a job that we end up hating, we feel like a failure for not having it all figured out.If we have a dream of writing a book or starting a non-profit or creating something of value and we stumble on the first try, we say that we’re not cut out for this. In cases like these, when we are attempting to do something that is complex and multi-faceted, I believe that being wrong is actually a sign that you’re doing something right. Here’s why… First Choice vs. For some reason, we often expect our first choice to be the optimal choice. For example… Finding the right person to marry. 5 Lessons On Being Wrong Being wrong isn’t as bad as we make it out to be. 1. 2. 3. 4. 5. Your first choice is rarely the optimal choice.