Frida Kahlo Cartoon Will Remind You That You're Awesome 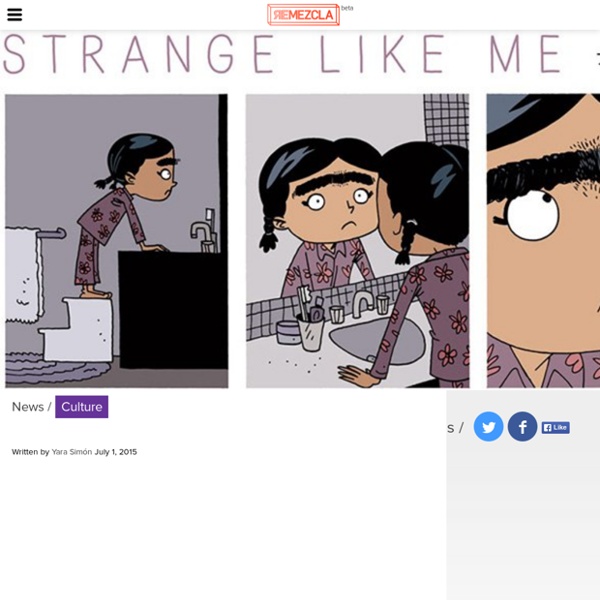 Frida Kahlo is the poster child for unibrows, and illustrator Gavin Aung Than perfectly captured why her refusal to give in to society’s norms about beauty is so important. The freelance cartoonist “takes inspirational quotes from famous people and adapts them into cartoons.” In his Strange Like Me strip, he uses Kahlo’s words as inspiration to tell the story of a young girl coming to terms with her bushy eyebrows (little did she know she’s probably going to grow up to be Cara Delevingne status). Check out the adorbs comic below:

Gisèle Freund’s photographs of Frida Kahlo and Diego Riera in the book, Frida Kahlo: The Gisèle Freund Photographs. Frida Kahlo: The Gisèle Freund Photographs, published byAbrams To the extent that she has been celebrated and discussed, it may seem there is little room for fresh insights into the life and work of Frida Kahlo. But more than 60 years after her death, a recent cultural moment surrounding the surrealist artist, expressed in a string of new exhibitions and books dedicated to her, is proving there is still territory to explore. A new book, Frida Kahlo: The Gisèle Freund Photographs, which Abrams published in March, is perhaps the most intimate of these investigations, featuring more than 100 rare photos of Kahlo and husband Diego Rivera from German-born French photographer Gisèle Freund. Freund was the only female founding member of the elite Magnum collective and spent years photographing for Time and Life. Freund’s photos are a mix of staged and candid moments of the couple at work and at rest, captured mostly at their home, La Casa Azul (the Blue House), in Coyoacán, Mexico City.

For 10 Years She Lived Uninhibited In Africa; Here Are The Photos From Her Unique Childhood. Tippi Degre had a unique childhood growing up with wild animals such as elephants, snakes, cheetahs, and zebras. Imagine being woken up by the feral noises of the Serengeti every morning, being best friends with some of the most majestic creatures on the planet, and knowing no other world than one in which animals and humans peacefully co-exist. It sounds like a fairy tale (or a great story to relay to grandkids), but it is exactly the type of life Tippi Degre, a young girl raised in the bush while her parents worked as wildlife photographers and filmmakers, experienced. Credit: BARCROFT MEDIA It is fair to say that Tippi was gifted one extraordinary childhood. Before she was born, her French parents relocated to Namibia, Africa. Instead of playing with Barbies and makeup, the young girl spent her time foraging in the brush with Bushmen, kissing toads, and riding on the backs and trunks of elephants. What are your thoughts?

Women Politely Ending Conversations With Men In Art mm yes this anecdote is so much more interesting than my needlework, thank you i hope someone beats you to death with your own walking stick please go on that’s very interestingoh, that’s very interesting THAT’S very interesting that’s VERY interesting that’s very INteresting THAT’s VEry INteresting i can’t reach my book without having to talk to him no, please, drink your mouth must be so thirsty from telling all these dour stories it’s it’s bad for your health to tell so many stories out of your mouth without putting something back in your mouth in exchange so you should drink quietly for at least as long as you were talking to me for your health for your mouth health have lunch outside, i said surely they won’t follow us outside, i said we could serve lunch in our own graves and they’d still lift up the tombstones to tell us about the act of the exchequer court “That sounds like a very difficult job. backing away? are you sure you couldn’t sing a little bit louder, Robert? About Author

A 17th-Century Stanchi Painting Reveals the Rapid Change in Watermelons through Selective Breeding Giovanni Stanchi (Rome c. 1645-1672). Oil on canvas. 38 5/8 x 52½ in. (98 x 133.5 cm.) / Courtesy Christie’s Old master work paintings are frequently cited for their depiction of historical events, documentation of culture, or portraiture of significant people, but there’s one lesser known use of some paintings for those with a keen eye: biology. Horticulture professor James Nienhuis at the University of Wisconsin tells Vox that he’s fascinated by old still life paintings that often contain the only documentation of various fruits and vegetables before we transformed them forever into something more desirable for human use. Update: Greg Cato writes: “The painting depicts a rare outcome of sub-par growing conditions, known as ‘starring.’

A Renaissance painting reveals how breeding changed watermelons Christie Images LTD 2015 Look in the bottom right corner of this painting. If you've never seen a watermelon like that before, you're not alone. This 17th-century painting by Giovanni Stanchi, courtesy of Christie's, shows a type of watermelon that no one in the modern world has seen. Stanchi's watermelon, which was painted sometime between 1645 and 1672, offers a glimpse of a time before breeding changed the fruit forever. Christie Images LTD 2015/Shutterstock James Nienhuis, a horticulture professor at the University of Wisconsin, uses the Stanchi painting in his classes to teach about the history of crop breeding. "It's fun to go to art museums and see the still-life pictures, and see what our vegetables looked like 500 years ago," he told me. The watermelon originally came from Africa, but after domestication it thrived in hot climates in the Middle East and southern Europe. That's because over time, we've bred watermelons to have the bright red color we recognize today.

A Museum Let Street Artists Do Whatever They Want On Its Walls. Here’s The ResultOnemorepost Many street artists are often discredited for their chosen line of art. A far cry from studio loft where he hibernate whilst working on their latest works, they are out and about in the very streets of their hometowns, creating art where they see it. Long Beach Museum of Art had a genius idea to allow street artists a blank canvas in their exhibitions, allowing them to create their own works as they see fit. Taking place on June 26th, the project is known as “Vitality and Verve: Transforming the Urban Landscape” which display works of not just street artists who are taking a new approach, but studio artists trying their hand at street art. More info: lbma.org (h/t: twistedsifter, thinkspacegallery) Artwork by Audrey Kawasaki Artwork by James Bullough Artwork by Esao Andrews Artwork by Alex Yanes Artwork by Brendan Monroe Artwork by SABER Artwork by Greg ‘Craola’ Simkins Artwork by Cryptik Artwork by Jeff Soto Artwork by Andrew Schoultz Artwork by David ‘Meggs’ Hooke Artwork by NoseGo

Sailor Moon in the 16th Century | Morgan Donner's Sewing Party Sailor Moon! Such a glorious show from my childhood! If you are not familiar with this fun and cute anime, you can watch the first season on Hulu, or Youtube, but the quick summary is that you have five school girls who can transform into superheros with various powers. They fight bad guys, find romance, and generally enjoy being best friends. Good stuff! I have seen a number of medieval and renaissance reenactors cosplay as the historical versions of their favorite characters, some of which were an easy fit, like the Queen of Hearts or Belle in her simple blue dress (or many other Disney Princesses), and some of which required a bit more creativity, like Captain America, Harlequin, or other tight-bodysuit superheros. I brought up the idea with friends and drew up a quick sketch to show what I had in mind. Woops, the order is a little mixed up, but you get the idea: similar base kirtles with minor differences in guard/trim placement and accessories. Hopefully the video above works.

Photos du journal - berlin-artparasites Alan Watts on Death, in a Beautiful Animated Short Film by Maria Popova “Think about that for a while — it’s kind of a weird feeling when you really think about it…” Philosopher and writer Alan Watts (1915-1973) is best-known for authoring the cult-classic The Way of Zen and popularizing Eastern philosophy in the West alongside John Cage. In this hauntingly beautiful animation based on a Watts lecture, produced by Luke Jurevicius and directed by Ari Gibson and Jason Pamment, Watts considers what death might be, exploring the notion of nonexistence and pitting it as “the necessary consequence of what we call being” — something he examines in greater depth in his indispensable book The Book: On the Taboo Against Knowing Who You Are (public library). UPDATE: A reader points out that the animation comes from a video for “Sometimes the Stars” by Australian band The Audreys from their 2010 debut album of the same title. What’s it gonna be like, dying? Donating = Loving Bringing you (ad-free) Brain Pickings takes hundreds of hours each month.

Haunting Photo Series Shows What The "Ideal Female Body" Used To Look Like Warning: This post may not be safe for work. Images of idealized beauty permeate most of the media we consume, and it has for hundreds of years; throughout decades dominated by shifting aesthetics and beauty standards, the idea of the attractive female has taken numerous forms. Titian’s reclining Venus, for example, is shaped differently from the fashion models of today’s ad campaigns, and African diasporic art offers yet another ideal. More often than not, women who don't fit the mould of the day are excluded, judged, and made to feel less-than. With Unadorned, the photographer Julia Fullerton-Batten hopes to recall the classical vision of the female body, one dominated by soft curves, accentuated dreamy candle-light. She explains, “I […] wanted to photograph people who are labeled as ‘fat’ as judged by today’s society.” Inspired by the 15th-17th century masters’ return to classical aesthetics, Fullerton-Batten celebrates human anatomy and sensuality. Thanks to Beautiful/Decay

Ultimate Beginner's Guide to Watercolor Painting & Supplies If you prefer tubes pre-packaged tube sets will also give you a good starter selection of colors for watercolor painting. Start by using brand name "academic" or "student" grade watercolors until you can commit your resources to buying "artist" grade watercolor supplies. I suggest the following palette of colors for beginners: This selection is a bright balanced palette of warm and cool colors containing pure transparent and semi-transparent organic and inorganic pigments. My personal palette contains eight additional colors. Use any watercolor pad, block, or loose paper with a weight of #140 or higher. because you can always cut them in half or quarters for smaller paintings. You can even find servicable beginner's watercolor pad (for learning) near the Crayola rack at your local drugstore. Cake and Pan watercolor sets usually have built-in fold out palettes that are useable in varying degrees depending on their size and orientation. . Tap water is usually fine.

Basic Watercolor Painting Supplies: 6 that You Will Need Watercolor is an exciting and very versatile fine art media that can be intimidating for a beginner. To make your experience with watercolor more enjoyable, you will need to gather some basic watercolor painting supplies. The quality of your materials will greatly influence your results, so I recommend buying professional quality supplies. If you paint something you really like, you will feel better if it is done with good quality, archival materials. Silicon brushes are very convenient to apply masking fluid 1. You can buy individual sheets of paper or pads. The weight number is actually the weight of 500 20″ x 30″ sheets of paper, the higher the number, the thicker the paper. 90lb paper is quite thin and more suited for studies and training; it will need to be stretched.140lb is of medium thickness and the most commonly used; it will also need to be stretched.300lb is more like cardboard and doesn’t require stretching, but is more expensive and will take longer to dry. 2. 3. 4. 5. 6. 7.