9 Nervy Facts About the Vagus Nerve 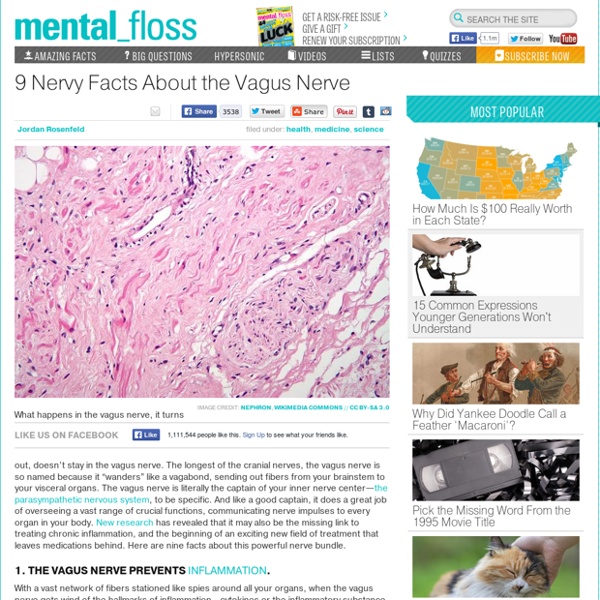 Neurocomic: A Graphic Novel About How the Brain Works by Maria Popova From the caves of memory to the castles of deception, by way of naughty neurotransmitters and giddy ganglia. Scientists are only just beginning to understand how the brain works — from what transpires in it while we sleep to how to optimize its memory to what love does to it to how music affects it — and the rest of us fall somewhere on the spectrum between fascinated and confused when it comes to the intricate inner workings of our master-controller.

Why 'Fake It Till You Make It' Is So Effective, According to Science It took me a while before I started calling myself an author. I've been writing this column for almost two years, and have reached an audience well into the millions. I'm about to finish my first book (which I've ghost written for a New York Times best-selling author), and I'll be publishing my own book--with high hopes--in just a few months. (If you'd like to follow the launch, sign up here for free updates.) But how about before all of this? Was I an author then? A Polyvagal Primer The fundamental premise of Polyvagal Theory is that human beings need safety, and our biology is fiercely devoted to keeping us out of harm’s way. As most therapists know, the body’s rapid-response survival system is orchestrated by our autonomic nervous system (ANS). To briefly review, the ANS operates two branches: the sympathetic and the parasympathetic. The sympathetic branch mobilizes us to defend against danger via the fight-or-flight response.

This Nifty Infographic Is a Great Introduction to Neuroplasticity and Cognitive Therapy It's startling to think about how we've got a spaceship billions of miles away rendezvousing with Pluto, yet here on Earth there are major aspects of our own anatomy that we're almost completely ignorant about. We've climbed Everest, sent men to the moon, and invented the Internet — but we still don't know how our brains work. The positive outlook is that many health, science, and research specialists believe we're on the precipice of some major neuroscientific breakthroughs. One example of a recent discovery with major implications is our further understanding of neuroplasticity. Simply put, we used to think our brain was what it was — unchangeable, unalterable. We were stuck with what nature gave us.

This Is How To Make Good Habits Stick: 6 Secrets From Research We all want to get to the gym, be more productive, be kinder to our loved ones… and then we don’t do it. Why? Well, building solid personal habits can be hard. In fact, research shows it takes an average of 66 days to build a new good habit. From Oliver Burkeman’s Help!

I Now Suspect the Vagus Nerve Is the Key to Well-being Have you ever read something a million times only to one day, for no apparent reason, think “Wait, what is that?” This happened to me the other day for “the vagus nerve.” I kept coming across it in relation to deep breathing and mental calmness: “Breathing deeply,” Katie Brindle writes in her new book Yang Sheng: The Art of Chinese Self-Healing, “immediately relaxes the body because it stimulates the vagus nerve, which runs from the neck to the abdomen and is in charge of turning off the ‘fight or flight’ reflex.” Also: “Stimulating the vagus nerve,” per a recent Harvard Health blog post, “activates your relaxation response, reducing your heart rate and blood pressure.” And: Deep breathing “turns on the vagus nerve enough that it acts as a brake on the stress response,” as an integrative medicine researcher told the Cut last year.

Aphantasia Aphantasia is the suggested name for a condition where one does not possess a functioning mind's eye and cannot visualize imagery.[1] The phenomenon was first described by Francis Galton in 1880,[2] but has remained largely unstudied since. Interest in the phenomenon renewed after the publication of a study conducted by a team led by Prof. Adam Zeman of the University of Exeter,[3] which also coined the term aphantasia.[4] Research on the subject is still scarce, but further studies are planned.[5][6] History[edit] The phenomenon was first described by Francis Galton in 1880 in a statistical study about mental imagery.[2] Galton described it as a common phenomenon among his peers.[7] However, it remained largely unstudied until 2005, when Prof. In popular culture[edit]

How to get massively motivated in less than 60 seconds  - Commit Action Confession time: Even highly driven and productive entrepreneurs still struggle every day to turn on their motivation when they need it. Perhaps you’re one of these folks. You’re busy. You’re building a kickass business.