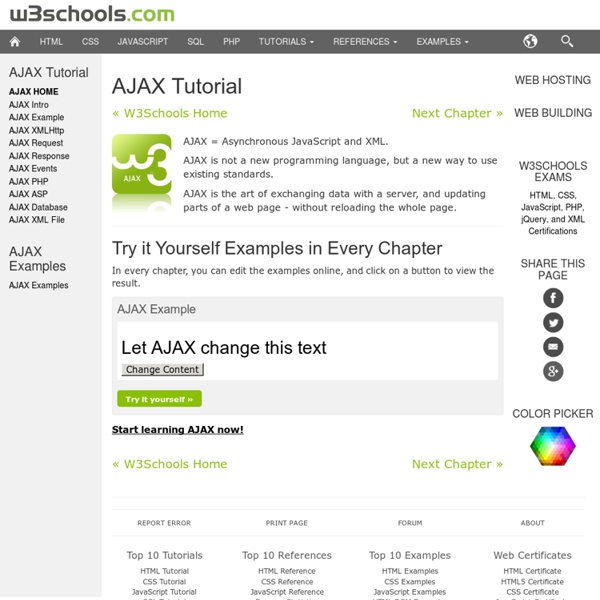 PHP 5 Tutorial Ajax Tutorial - Tutorial Ajax is a catchy name for a type of programming made popular in 2005 by Google and other big web developers. Ajax loosely stands for Asynchronous Javascript And XML, but that just sounds like techno jargon to many people. In plain English, Ajax can be thought of Javascript on steroids. When javascript was released, people loved all the cool things you could do with the web browser to make a more user-friendly experience. You could do form validation, quirky popup messages, make cool web tools and more. If you wanted to get any information from a database on the server, or send user information to a server-side script like PHP, you had to make an HTML form to GET or POST data to the server. Ajax attempts to remedy this problem by letting your Javascript communicate directly with the server, using a special Javascript object XMLHttpRequest. Pretty much. Ajax can be quite confusing to someone with little web programming experience.

Java Tutorial: OO PHP Part 1: OOP in Full Effect Introduction On the old site, I started a series of tutorials named "PHP Application Design". I planned for at least three parts, and while I did publish the first two and wrote at least half of part three, I found myself out of time to make it to the finish. Still dedicated to writing reusable and extensible PHP code and spreading the knowledge, this is a restart of the series, renamed as simply "OO PHP". So: Welcome to part one of the "OO PHP" series. This article is an overview of what PHP has to offer with respect to OOP, with examples on how to use these concepts. If you have wanted to grasp OOP, but haven't come around to learning it, this article is for you. A couple of things have changed in this tutorial. Index 1. 1. 1.1 A tiny bit of theory So what is an object anyway? An object is an instance of a class with the following essential properties: Each object has its own identity.Each object can have certain behaviour.Each object is in a state. Each object has its own identity. Wait.

jquery - How to render a View using AJAX in Spring MVC JavaScript Tutorial step1 Étape suivante: S'il vous plaît sélectionner un prix, entrez votre adresse courriel et de remplir vos informations de livraison pour avoir une chance de gagner. Quantité restante: 1 Quantité restante: 6 Quantité restante: 9 Date d'attribution: February 21, 2012 Réclamation: 116.8 Secondes © 2012 Tous droits réservés. PHP Rio Pyramid Ioniser - White - Air Purifier For Cleaner Air: Amazon.co.uk: Kitchen & Home I have used ionisers for years and I can guarantee that they do work. This neat little ioniser is silent in use and costs very little to run. The idea of ionisers is simples, through simple electronics they produce negative ions which have the effect of cleansing the air in the surrounding area. These ions have a short life so need to be constantly replaced, which is where these ionisers come in. Because they cleanse and purify the air they tend to gather dust around them and need to be cleaned quite often, but this is a small proce to pay for the benefits they give. The air is fresher around the ioniser which leads to a feeling of being more awake and aware, yet in a bedroom they help to induce good relaxing sleep. I had a friend who used to drive miles each week and would often tell me how tired he felt. For ionisers to work, they are best in a room with the windows closed so the air is quite still, opening a window simply makes the ioniser pointless.

The AJAX response: XML, HTML, or JSON? Page last changed today Since my last AJAX project I've increasingly been wondering about the "ideal" output format for the AJAX response. Once you've succesfully fired an AJAX request, what sort of response should the server give? An XML document? An HTML snippet? A JSON string which is converted to a JavaScript object? (This article has been translated into Spanish.) When you receive an additional bit of data for your AJAX application, you should start up a script that incorporates this extra data into your single-page HTML interface. In my last project I received some data as XML documents and some as HTML snippets, and they needed different kinds of scripts to write the data to the page. After I'd finished the application I delved a bit deeper into JavaScript Object Notation, invented by Douglas Crockford and recently chosen as the default output format for most Yahoo services, and I think I like it, although I've never yet used it. I'm left wondering: which format is the best? No.

Top 25 Web Development Blogs For Beginners Posted June 25, 2013 by Angela | © Liubomirt | Dreamstime.com Trying your hand at a little Web development work? The task probably seems pretty daunting, as experienced developers are typically entrenched in a sea of scripting languages that make the layperson wrinkle their eyebrows in utter confusion. But hey, anyone can do it if they set their mind to it—and if you set your mind to learning one language at a time, it’s more than do-able for the average tech enthusiast who has an ample amount of fortitude. Fortunately, the same technology that has made Web development such an essential part of the world today has also made it possible for skilled development gurus to share their tactics with the world at large through blogs. BONUS(es): Must-Have Beginner Tutorial Sites In addition to blogs, there are a number of great resources for developers that take the form of a collection of tutorials. Developers: Do you have a resourceful blog for newbies to the field?

Interplanetary Trajectories The MESSENGER spacecraft is closing fast on its close encounter with Mercury tomorrow (the Planetary Society has a detailed preview here, flyby simulation video here). This will be the first close approach to Mercury since Mariner 10 in 1974-75, and it will be very close - only about 200 kilometers from the surface! This is the first of three flyby encounters in 2008-2009, designed both for imaging/science and for trajectory modifications that will help MESSENGER to match Mercury's orbit and allow Mercury orbit insertion in March 2011. Launched in August 2004, MESSENGER's journey to Mercury has taken a rather indirect path, looking something like a pinball in a pinball machine in in the animated GIF above (linked from the Planetary Society web site). This whole orbital mechanics business has interested me since high school. Nowadays at places like JPL, interplanetary trajectory design is incredibly sophisticated.