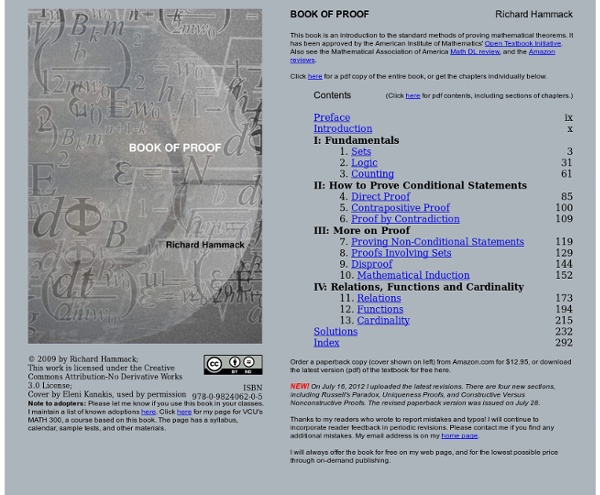 This book is an introduction to the standard methods of proving mathematical theorems. It has been approved by the American Institute of Mathematics' Open Textbook Initiative. Also see the Mathematical Association of America Math DL review (of the 1st edition), and the Amazon reviews. The second edition is identical to the first edition, except some mistakes have been corrected, new exercises have been added, and Chapter 13 has been extended. (The Cantor-Bernstein-Schröeder theorem has been added.) The two editions can be used interchangeably, except for the last few pages of Chapter 13. Order a copy from Amazon or Barnes & Noble for $13.75 or download a pdf for free here. Part I: Fundamentals Part II: How to Prove Conditional Statements Part III: More on Proof Part IV: Relations, Functions and Cardinality Thanks to readers around the world who wrote to report mistakes and typos! Instructors: Click here for my page for VCU's MATH 300, a course based on this book.

Fibonacci in Nature The Fibonacci numbers play a significant role in nature and in art and architecture. We will first use the rectangle to lead us to some interesting applications in these areas. We will construct a set of rectangles using the Fibonacci numbers 1, 1, 2, 3, 5, 8, 13, 21, and 34 which will lead us to a design found in nature. UCSB scientists discover how the brain encodes memories at a cellular level (Santa Barbara, Calif.) –– Scientists at UC Santa Barbara have made a major discovery in how the brain encodes memories. The finding, published in the December 24 issue of the journal Neuron, could eventually lead to the development of new drugs to aid memory. The team of scientists is the first to uncover a central process in encoding memories that occurs at the level of the synapse, where neurons connect with each other.

A Non-Mathematical Introduction to Using Neural Networks The goal of this article is to help you understand what a neural network is, and how it is used. Most people, even non-programmers, have heard of neural networks. There are many science fiction overtones associated with them. Online texts Professor Jim Herod and I have written Multivariable Calculus ,a book which we and a few others have used here at Georgia Tech for two years. We have also proposed that this be the first calculus course in the curriculum here, but that is another story.... Although it is still in print, Calculus,by Gilbert Strang is made available through MIT's OpenCourseWare electronic publishing initiative. Here is one that has also been used here at Georgia Tech. Linear Methods of Applied Mathematics, by Evans Harrell and James Herod.

Mathematical Atlas: A gateway to Mathematics Welcome! This is a collection of short articles designed to provide an introduction to the areas of modern mathematics and pointers to further information, as well as answers to some common (or not!) questions. The material is arranged in a hierarchy of disciplines, each with its own index page ("blue pages"). To reach the best page for your interests, use whichever of these navigation tools ("purple pages") you prefer:

47 Mind-Blowing Psychology-Proven Facts You Should Know About Yourself I’ve decided to start a series called 100 Things You Should Know about People. As in: 100 things you should know if you are going to design an effective and persuasive website, web application or software application. Or maybe just 100 things that everyone should know about humans! The order that I’ll present these 100 things is going to be pretty random. So the fact that this first one is first doesn’t mean that’s it’s the most important.. just that it came to mind first. An Introduction to Neural Networks Prof. Leslie Smith Centre for Cognitive and Computational Neuroscience Department of Computing and Mathematics University of Stirling. lss@cs.stir.ac.uk last major update: 25 October 1996: minor update 22 April 1998 and 12 Sept 2001: links updated (they were out of date) 12 Sept 2001; fix to math font (thanks Sietse Brouwer) 2 April 2003 This document is a roughly HTML-ised version of a talk given at the NSYN meeting in Edinburgh, Scotland, on 28 February 1996, then updated a few times in response to comments received. Please email me comments, but remember that this was originally just the slides from an introductory talk! Why would anyone want a `new' sort of computer? What is a neural network?