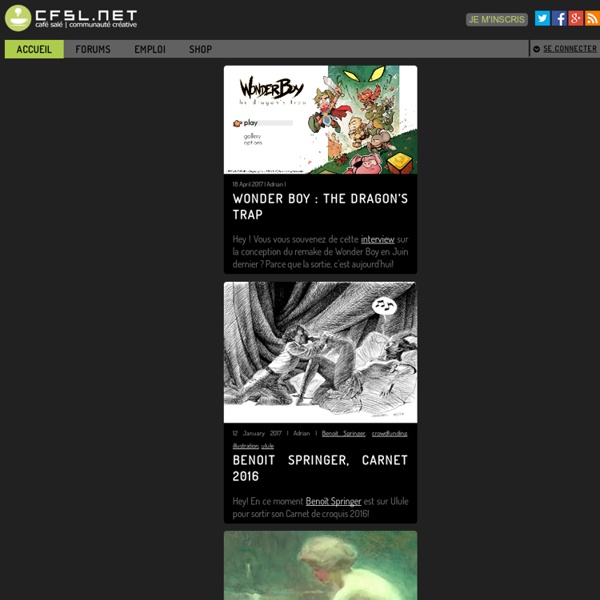 Making Of The Village by Marc Simonetti Watch the exclusive making of The Village cover by Marc Simonetti with the entire live painting sessions recap, more of 8 hours of video, showing the entire creative process of the artist Part 1: Part 2: Part 3: Making Of The Village by Marc Simonetti Creativity & Play: Artists & Authors Share Their Favorite Ways to Play Play isn’t just inherently fun — it’s also a powerful way to connect to our creativity, loosen routine and rigidity and spark new insights. According to creativity coach Gail McMeekin, “Play brings us back to childhood when we were free to play with abandon and we were not afraid of being judged or criticized.” When we’re able to reconnect to that blissful time, it helps us tinker with new ideas and make novel connections, she said. Michelle Ward, a creative career coach, also views play as a window into our smaller selves.

FlipBooKit - Mechanical Flipbook Art and Kit by shinymind A NEW (old fashioned) Art Format Flipbookit.net is from kinetic artists, Mark Rosen and Wendy Marvel. They create moving art that tells stories and tickles our sense of nostalgia. In late 2011, their series of motorized flipbooks based on the motion studies of Edweard Muybridge began touring with galleries, art shows and at special events internationally. Kid Acne Stabby Women Chronicles More Stabby Women adventures from the ongoing body of work… The Return I have a solo show opening at Galo Art Gallery in Turin, Italy in a few weeks. Full details coming soon…

A Separate Reality: New Paintings of Dystopian Worlds by Alex Andreev Trying to categorize or summarize the genre of Alex Andreev’s (previously) digital paintings is nearly impossible. Part science fiction, part dystopian future, the scenes are equally disturbing and beautiful, his characters inhabiting a world Andreev tells me is deeply influenced by Soviet-era literature, music and movies. Based in St. Petersburg, Russia he works primarily with Adobe Photoshop and Corel Paint and relies only on a small selection of brushes and colors to create each illustration, meaning there are no special effects or 3d-rendering of anything. Andreev recently published an art book, A Separate Reality, which is available through Blurb.com.

Creativity for kids who don't like crafts Parent advice From our panel of staff contributors Mud, the pre-Renaissance child's paint. From what I've heard, one of the big benefits of arts and crafts for kids is the tactile/sensory input. Graffiti Research Lab The United States of America is going out of business! But here at the U.S. Department of Homeland Graffiti, we want to turn this moment of national embarrassment and hard times into real savings for you and your family. From June 4th through the 28th, the U.S.D.H.G and the Graffiti Research Lab are liquidating all confiscated, high-tech graffiti artifacts and tools, expunged evidence, court exhibits, redacted documents and office furnishings, priced to sell. So grab a handful of Euros or Mao Bucks (U.S. currency still accepted while supplies last) and head on down to Gallery Anno Domini located between U.S.

RIDDICKART I was recently invited, along with several other artists, to showcase an original piece of art memorializing the late Dave Brockie (Orderus Urungus) of the legendary band, GWAR (USA). The exhibit will open on May 3rd and will be hosted by MF Gallery, Brooklyn, NY. I’ve had the honor to showcase my work alongside Brockie at MF Gallery in the past; GWAR made a huge impression on my youthful mind circa 1988—it’s a real honor to return my appreciation for Brockie’s vision and talent. 59 Vintage Book Covers by amanda Mon, 10/05/2009 - 09:48 This weekend I was cruising through flickr and came across this group called Book Cover Club. To my surprise (and delight!) they were all vintage book covers. Nothing pleases me more than some vintage in my life! Some of these books are so ridiculous like the sexual fantasy ones, but the cover is still pure 1960s gold!

10 free Photoshop brushes for painting nature In this three-part workshop, I've tried to lay out the general rules and custom brush settings to as well as show some tips and tricks on unconventional ways to use them. The first part was devoted to painting characters, the second part described painting textiles. Now, we have come to the third and final part, which will be devoted to enhancing landscapes and everything that you might find useful for painting nature. The majority of brushes described here are photograph based for the sake of realism and have been created in Photoshop. However, where possible, I am also going to write down the settings for standard Corel Painter brushes.

4 Silly Sketching Exercises to Spark Your Creativity Creativity makes problem-solving and accomplishing projects that much easier. (Plus, it’s just really fun!) Carla Sonheim, an illustrator, workshop instructor and author of the new book The Art of Silliness, compared neglecting your creativity to driving with a flat tire. “You might get where you’re going, but — oh! — how much smoother, faster, and painless it would be with all four tires inflated.” We also seem to operate more smoothly when we use both our serious (i.e., logical) and creative sides, she said.

STAIR ROVER Filmed by Juriaan Booij Material : aluminum, maple, bamboo, PU rubber, PVC Inspiring action The piece aims to expanding the capability and possibility of extreme sports as we understand them. Inherited from our natural instincts, sliding as children and snowboarding as adults, the focus is on one of the most influential and stimulating sports – skateboading, aiming to push the boundaries further. The piece creates a groundbreaking form of sport which previously never existed and utilises the hidden energy of our cities – stairs.

Mike Force: Dirty Jokes Current Issue On sale now at newsstands or on screen May 2014 - Issue #160 All year long, Juxtapoz is celebrating its 20th Anniversary by showcasing the pivotal figures in contemporary art over the past two decades. Some artists are blue chip, some are underground heroes, others are behind-the-scenes legends.