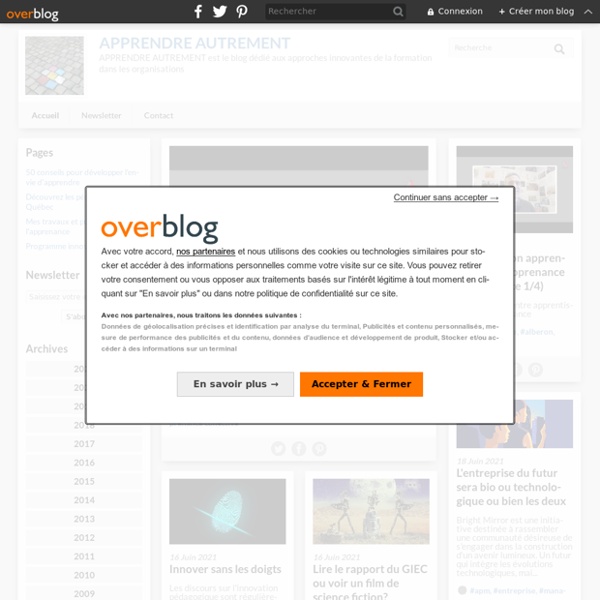 Digital Storytelling Project Examples - iPad Multimedia Tools App Smashing! Using multiple apps to create stories! Book Trailers by using middle schoolers using Puppet Pals, Toontastic, iMovie, and more! Talking Book Characters by middle schoolers using FaceJack, Tellagami, PhotoSpeak and more! ChatterPix Kids: 5 Ways Schools Can Make Learning Relevant for Students By Tanya Roscorla on November 10, 2014 Eric Sheninger talks about how to make learning work for students at TedxBurnsvilleED. Screenshot of the talk by Tanya Roscorla All too often, school is about what works for adults -- not about what works for students. 10 Heuristics for User Interface Design: Article by Jakob Nielsen Summary: Jakob Nielsen's 10 general principles for interaction design. They are called "heuristics" because they are broad rules of thumb and not specific usability guidelines. Visibility of system status The system should always keep users informed about what is going on, through appropriate feedback within reasonable time. Match between system and the real world

Our Growth Mindset Please forgive me if you have already heard me refer to the concept of “growth mindset,” a notion we owe to the renowned Stanford psychologist Carol Dweck, whose book, Mindset: The New Psychology of Success, is one of the most thought-provoking texts about human psychology to have been published in a long time. For Dweck, much of how people approach the challenges they face in life, as well as the way in which they define their sense of satisfaction in meeting those challenges, hinges on the outlook they have on the world. NB.

Motivating People to Perform at Their Peak - Art Markman by Art Markman | 9:00 AM January 14, 2014 Almost all decisions, big and small, are choices between exploring new possibilities and exploiting old ones. When you explore, you select an option that’s unknown—or reexamine one that wasn’t optimal in the past to get new information about it. When you exploit, you choose something that’s yielded good results before, believing it will do so again. Of course, the known course is safer. The Top 23 Educational iPad Apps Teachers Favour to Use in Schools May 14, 2014 This is the last post in a series of posts on Tony Vincent's " iPad As Teacher's Pet". In today's post, I am sharing with you a list of some of the top educational iPad apps that teachers favour to use at school. The apps you will see below are based on a March 2014 survey delivered on Twitter to 558 iPad-using teachers. These teachers were asked about their favourite apps to use in school and they came up with this selection. As an educational app reviewer, I find this selection to be highly relevant and contains the best educational apps that teachers should know about. The apps are arranged in order of priority.

The Difference Between Technology Use And Technology Integration Bring TeachThought Professional Development To Your School! The Difference Between Technology Use And Technology Integration by TeachThought Staff 10 Best Plagiarism Checker Online - TechCricklets Plagiarism is a common problem for publisher, writers, and webmasters. While writing a particular topic it is very easy to use the text as used by other sites, but it gives birth to the plagiarism. Below are some best plagiarism checker online that can help you identifying copied content. Plagiarism means copying any other person text, or document and later publish it with your own name.

The Power (and Peril) of Praising Your Kids What do we make of a boy like Thomas? Thomas (his middle name) is a fifth-grader at the highly competitive P.S. 334, the Anderson School on West 84th. Slim as they get, Thomas recently had his long sandy-blond hair cut short to look like the new James Bond (he took a photo of Daniel Craig to the barber). Unlike Bond, he prefers a uniform of cargo pants and a T-shirt emblazoned with a photo of one of his heroes: Frank Zappa.