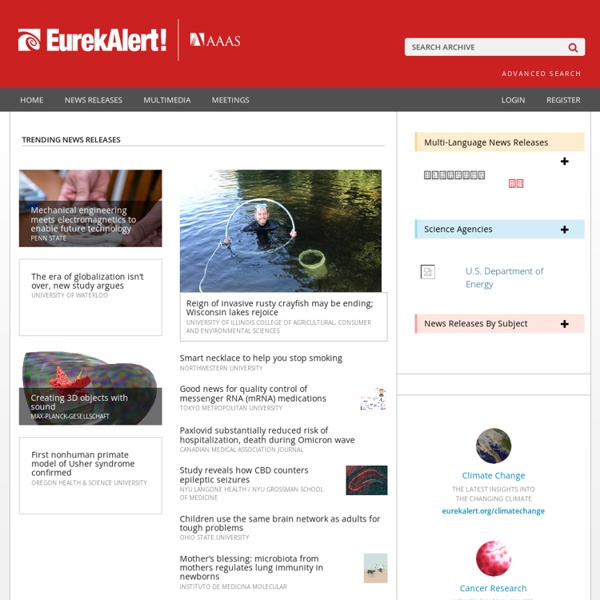 Antibody's unusual abilities might inspire vaccine strategies The antibody shows promise both for stopping E. coli from adhering to cells and for dislodging it E. coli bacteria showing the appendages used to adhere to other cells. For example, certain forms of E. coli can attached to human cells in the urinary tract to cause infection. Credit: Sokurenko lab/University of Washington The recent discovery of a novel antibody that works in an unusual way might inspire ideas for designing more effective vaccines. Among the common pathogens that could be targeted are urinary-tract infecting strains of E. coli.

Dark Geology: The Mechanism of a Mystery - From Quarks to Quasars Image: FQTQ/Matt Hunter Earth is often taken for granted, and when dealing with the Universe, it is very easy to lose sight of just how rare it is that we can be here– a sentient species numbering 7,066,333,655 as of 23:24 UTC (EST+5) Sep 14, 2012 (time of the original writing). Moreover, an advancing knowledge of all that is around us, and the curiosity and aptitude to drive us further. I would like to take you over some of the amazing details of our own, remarkable planet – from the amazing acts of natural geological process to the terrible ticking time-bombs of Terra. Astronomy Picture of the Day Discover the cosmos! Each day a different image or photograph of our fascinating universe is featured, along with a brief explanation written by a professional astronomer. 2016 April 15 Mercury and Crescent Moon Set Image Credit & Copyright: Miguel Claro (TWAN, Dark Sky Alqueva) Explanation: Innermost planet Mercury and a thin crescent Moon are never found far from the Sun in planet Earth's skies. Taken near dusk on April 8, this colorful evening skyscape shows them both setting toward the western horizon just after the Sun.

ics News - Physics News, Material Sciences, Science News, Physics Study reveals traits and evolutionary history of carnivorous bats (Phys.org)—A pair of researchers with the University of Washington has found similarities between different types of carnivorous bats compared to those that are insectivores or those that eat fruit, nectar or of course ... Monkeys and humans share staring behavior Following another's gaze is a hallmark of human learning and socialization from infancy to old age. Genetics: Digging into our Past & Carving our Future My name is Nandini Thogarapalli. I am a grade 7 student at Simon Fraser Jr.High, Calgary AB and here is a standard, non-experimental science project. A journey made through the controversial and multipurpose science of genetics! Home Picture 1: Links to my past VSF Projects: The Human Eye (2006)Dietary Fat...The Good,The Bad,The Ugly (2005)Lung Cancer (2004)Natural Reflectors (2003) Link to server: VSF server

Revealing kidney cancer's secret Tumors gain survival advantage by reprogramming their metabolism An international team of scientists, led by UC Davis nephrologist Robert Weiss, have used a sophisticated combination of proteomics and metabolomics to show how renal cell carcinoma (RCC) reprograms its metabolism and evades the immune system. In addition, the study found that cancer grade has a major impact on this reprogramming. Evolutionary roots of self control: Study of 13 primate species links 'intertemporal choice' to natural selection A chimpanzee will wait more than two minutes to eat six grapes, but a black lemur would rather eat two grapes now than wait any longer than 15 seconds for a bigger serving. It's an echo of the dilemma human beings face with a long line at a posh restaurant. How long are they willing to wait for the five-star meal?

Chromosome Mapping: Human Genome Research in Progress The Human Genome Project was completed in 2003. One of the key research areas was Chromosome Mapping. This page details that research. Mapping is the construction of a series of chromosome descriptions that depict the position and spacing of unique, identifiable biochemical landmarks, including some genes, that occur on the DNA of chromosomes. In 1990, DOE initiated projects to enrich the developing chromosome maps with markers for genes.

Patterns of Glowing Sharks get Clearer with Depth A green biofluorescent chain catshark (Scyliorhinus retifer) ©AMNH/J. Sparks, D. Gruber, and V. Pieribone A team of researchers led by scientists from the American Museum of Natural History has found that catsharks are not only able to see the bright green biofluorescence they produce, but that they increase contrast of their glowing pattern when deep underwater. Critical thinking in the organization Even the mainstream training field is realizing that reduced layers of bureaucracy mean decision-making gets pushed down the organization chart. This is the message of the AMA in the promotional video – Critical Thinking: Not just a C-suite skill. However, wirearchy takes this one important step further by advocating a two-way flow of power and authority. In both cases, the need for critical thinking is evident.

Researchers provide further insight into male bias of autism A 2:1 or 3:1 male to female autism spectrum disorder prevalence bias is frequently reported in studies. The series is published in Molecular Autism and explores structural differences in the brain, the role of prenatal sex hormones and a theory referred to as the "female protective effect." "Autism has always been perceived as a condition that occurs more often in males, which means that females are usually underrepresented in research studies," explains guest editor Meng-Chuan Lai from the University of Cambridge, UK. "This means there's a risk that the scientific and clinical literature provides a partial, male-based understanding of autism." It is clear, however, that autism spectrum disorder (ASD) is not simply a male condition.

Applied Materials sets cobalt on path to future chips When a global leader in providing equipment, services and software used for manufacturing semiconductors makes an announcement, industry players sit up and listen, as the technologies are going to impact market activity in devices such as smartphones, flat screen TVs and solar panels. Tuesday's announcement from Applied Materials was big. The Santa Clara, California based equipment supplier announced the launch of its Endura Volta CVD Cobalt chip making machine. NOVA The 100-Year-Old Idea That Could Change Flight Inspired by birds, bats, and the Wright brothers, engineers are building the next breakthrough in aviation. From NOVA Next | Feb 22, 2017 Key Brain Regions Found To Be Smaller in People With ADHD In the largest study of its kind, research shows people with ADHD have smaller brain regions—including the amygdala, which is responsible for regulating emotions.

About Science360 News Service - Science360 News Service Science360 is brought you by the National Science Foundation (NSF). We gather news from wherever science is happening, including directly from scientists, college and university press offices, popular and peer-reviewed journals, and dozens of National Science Foundation science and engineering centers. Our articles, videos and podcasts feature NSF-funded research. You can: Access the Science360 website for breaking news and in-depth reports. Use Science360 RSS feeds to view news in your RSS reader or display news on your website or blog.