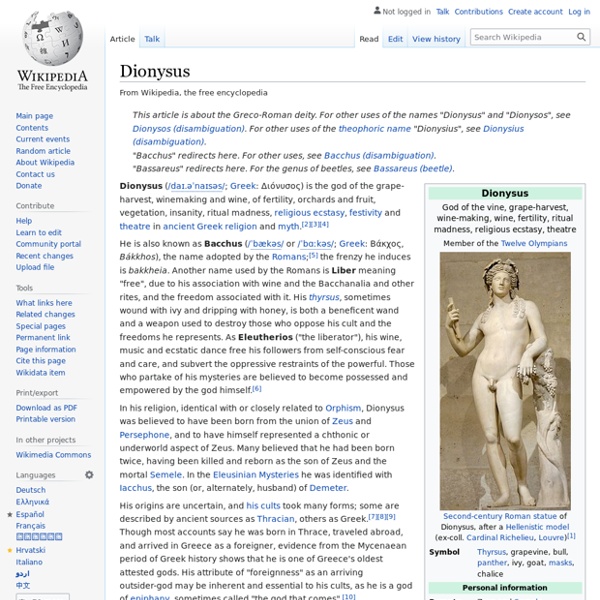 Ancient Greek god of winemaking and wine Dionysus (; Greek: Διόνυσος) is the god of the grape-harvest, winemaking and wine, of fertility, orchards and fruit, vegetation, insanity, ritual madness, religious ecstasy, festivity and theatre in ancient Greek religion and myth.[2][3][4] He is also known as Bacchus ( or ; Greek: Βάκχος, Bákkhos), the name adopted by the Romans;[5] the frenzy he induces is bakkheia. Another name used by the Romans is Liber meaning "free", due to his association with wine and the Bacchanalia and other rites, and the freedom associated with it. His thyrsus, sometimes wound with ivy and dripping with honey, is both a beneficent wand and a weapon used to destroy those who oppose his cult and the freedoms he represents. As Eleutherios ("the liberator"), his wine, music and ecstatic dance free his followers from self-conscious fear and care, and subvert the oppressive restraints of the powerful. Dionysus is an agriculture and vegetation deity. Name[edit] Origins[edit]

The Coudenhove-Kalergi plan - The genocide of the Peoples of Europe - book is banned This article is a translation of an Italian article, originally posted on Identità. Mass immigration is a phenomenon, the causes of which are still cleverly concealed by the system, and the multicultural propaganda is trying to falsely portray it as inevitable. With this article we intend to prove once and for all, that this is not a spontaneous phenomenon. What they want to present as an inevitable outcome of modern life, is actually a plan conceived around a table and prepared for decades, to completely destroy the face of the continent. The Pan-Europe Few people know that one of the main initiators of the process of European integration, was also the man who designed the genocide plan of the Peoples of Europe.

Calydon Greek city in ancient Aetolia The Laphrion sanctuary plateau of Calydon with Varasova mountain on the background. Calydon or Kalydon (; Ancient Greek: Καλυδών) was a Greek city in ancient Aetolia, situated on the west bank of the river Evenus, 7.5 Roman miles (approx. 11 km) from the sea.[1] Its name is most famous today for the Calydonian Boar that had to be overcome by heroes of the Olympian age. Mythology[edit] The heroes of Calydon are among the most celebrated of the heroic age.

Apollonian and Dionysian Terms representing a dichotomy/dialectic between rationality and emotion The Apollonian and Dionysian is a philosophical and literary concept and dichotomy/dialectic, based on Apollo and Dionysus in Greek mythology. Some Western philosophical and literary figures have invoked this dichotomy in critical and creative works, most notably Friedrich Nietzsche and later followers. EU should 'undermine national homogeneity' says UN migration chief - BBC News The EU should "do its best to undermine" the "homogeneity" of its member states, the UN's special representative for migration has said. Peter Sutherland told peers the future prosperity of many EU states depended on them becoming multicultural. He also suggested the UK government's immigration policy had no basis in international law. He was being quizzed by the Lords EU home affairs sub-committee which is investigating global migration. Mr Sutherland, who is non-executive chairman of Goldman Sachs International and a former chairman of oil giant BP, heads the Global Forum on Migration and Development , which brings together representatives of 160 nations to share policy ideas.

Aetolia Region of Ancient Greece Aetolia (Greek: Αἰτωλία, romanized: Aἰtōlía) is a mountainous region of Greece on the north coast of the Gulf of Corinth, forming the eastern part of the modern regional unit of Aetolia-Acarnania. Geography[edit] The Achelous River separates Aetolia from Acarnania to the west; on the north it had boundaries with Epirus and Thessaly; on the east with the Ozolian Locrians; and on the south the entrance to the Corinthian Gulf defined the limits of Aetolia. In classical times Aetolia comprised two parts: "Old Aetolia" (Greek: Παλιά Αιτωλία, romanized: Paliá Aitolía) in the west, from the Achelous to the Evenus and Calydon; and "New Aetolia" (Greek: Νέα Αιτωλία, romanized: Néa Aitolía) or "Acquired Aetolia" (Greek: Αἰτωλία Ἐπίκτητος, romanized: Aitolía Epíktitos) in the east, from the Evenus and Calydon to the Ozolian Locrians.

Plotinus Biography[edit] Plotinus had an inherent distrust of materiality (an attitude common to Platonism), holding to the view that phenomena were a poor image or mimicry (mimesis) of something "higher and intelligible" [VI.I] which was the "truer part of genuine Being". This distrust extended to the body, including his own; it is reported by Porphyry that at one point he refused to have his portrait painted, presumably for much the same reasons of dislike. Likewise Plotinus never discussed his ancestry, childhood, or his place or date of birth. From all accounts his personal and social life exhibited the highest moral and spiritual standards. Plotinus took up the study of philosophy at the age of twenty-seven, around the year 232, and travelled to Alexandria to study.

Soros Leaks Refer To UN Chief Peter Sutherland George Soros’ Open Society Foundation admits influence and incredibly close links with UN migration representative and former Goldman Sachs executive Peter Sutherland in leaked document. The paper, which told of how the migrant crisis presented an “opportunity” for the foundation to extend its global influence and attract more money, mentions Sutherland’s pro-migrant work. The foundation notes that through Sutherland they have been able to advocate at an “elite level” behind the scenes. Open Society are one of the contributors to the Columbia Global Policy Initiative (CGPI) which hosts Mr. Sutherland and claim that through Sutherland they are able to influence international migration policy due to the current migrant crisis.

Laocoön Trojan priest in Greek and Roman mythology Laocoön (;[1][2][Note 1] Ancient Greek: Λαοκόων, IPA: [laokóɔːn]), the son of Acoetes, is a figure in Greek and Roman mythology and the Epic Cycle.[3] He was a Trojan priest who was attacked, with his two sons, by giant serpents sent by the gods. The story of Laocoön has been the subject of numerous artists, both in ancient and in more contemporary times. Death[edit] The most detailed description of Laocoön's grisly fate was provided by Quintus Smyrnaeus in Posthomerica, a later, literary version of events following the Iliad.

Paneuropean Union The International Paneuropean Union, also referred to as the Paneuropean Movement and the Pan-Europa Movement, is the oldest European unification movement. It began with the publishing of Count Richard Nikolaus von Coudenhove-Kalergi's manifesto Paneuropa (1923), which presented the idea of a unified European State. Coudenhove-Kalergi, a member of the Bohemian Coudenhove-Kalergi family and the son of an Austro-Hungarian diplomat and a Japanese mother, was the organisation's central figure and President until his death in 1972. It is independent of all political parties, but has a set of principles by which it appraises politicians, parties, and institutions. The International Paneuropean Union has four main basic principles: liberalism, Christianity, social responsibility, and pro-Europeanism. At the same time, it openly welcomes and acknowledges the contributions of Judaism and Islam whose heritage they share.[1]

Oeneus Oeneus was a king of the area of Calydon in Greek mythology, son of King Porthaon and Queen Euryte. He married Althaea, with whom he had a number of children, including Deianeira, Meleager, Toxeus, Clymenus, Periphas, Gorge, Eurymede, Perimede and Melanippe. When Artemis sent a huge boar, called the Calydonian Boar, in his lands to ravage them because he had forgotten to honour the goddess, Oeneus asked his son Meleager to gather a party of heroes to kill the creature. The party consisted of Meleager, Atalanta, and Meleager's uncles; Atalanta played a major role in successfully hunting down and killing the boar. When the time came to give the boar's skin as a prize, Meleager gave it to Atalanta, despite the protests of his uncles who believed it should be theirs by right of birth. Meleager got furious and in the argument that broke out, he killed his uncles.

Amelius Amelius (/əˈmiːliəs/; Greek: Ἀμέλιος), whose family name was Gentilianus, was a Neoplatonist philosopher and writer of the second half of the 3rd century. Biography[edit] Amelius was not his original name; he seems to have chosen it to express his contempt for worldly things, as the word ἀμέλεια (ameleia) means negligence in Greek. Porphyry stated of Amelius in the Life of Plotinus, "Amelius preferred to call himself Amerius, changing L for R, because, as he explained, it suited him better to be named from Amereia, Unification, than from Ameleia, Indifference. EU Minister: "Europe WILL be diverse!", "there is not going to be" a White Europe in the future. Frans Timmermans, the Vice President of the European Commission, gave a speech saying that Europe is not allowed to remain majority White. “Diversity is now in some parts of Europe seen as a threat” he said. “Diversity comes with challenges.