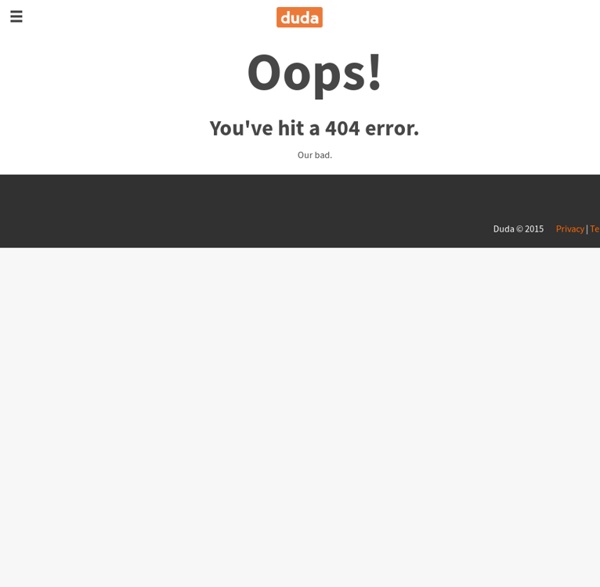 Best Practices For Effective Design Of "About me"-Pages - Smashing Magazine Advertisement The “about me”-page is one of the most overlooked pages in development and one of the highest ranked pages on many websites. In a world that’s becoming increasingly connected through the Web, it’s important that you engage your audience in a personal and friendly way, otherwise you risk just being another faceless web designer among a sea of websites. We had to go through hundreds of sites to come up with the following list.

Save web articles as PDF for reading later: Joliprint 5 Reasons Responsive Mobile Websites Are Bad for Small Businesses Responsive web design is hot. The amount of noise around responsive website design is deafening. When you first see a demo, it’s a beautiful thing. A website that automatically refactors based on the form factor of the browser. Heck, this LocalVox.com website is built on a responsive template. One site for mobile, web, tablet, TV, etc. Zyfer Bootstrap the delivery of mobile websites to your existing clients and new prospects with the Zyfer mobile technology suite. Our point-and-click interface makes it easy to create full-featured mobile sites quickly. Know CSS?Customize your mobile sites with full CSS control. Are you a…

Mobile marketing: 5 fundamental pillars for 2014 Cheryl Conner, a contributor at Forbes discusses what she calls “fundamental pillars of mobile marketing” for the coming year. The opportunity for mobile marketing is exploding. Portio Research predicts mobile subscribers worldwide will reach 7.0 billion by the end of 2013, 7.5 billion by the end of 2014 and 8.5 billion by the end of 2016 according to web resource mobiThinking.com.According to data shared by Forbes editor Lewis Dvorkin, of 49 million Forbes.com visitors in July, 40 percent of views of the most popular post came from smartphones, and an additional 6 percent came from tablets. Overall, Forbes’ monthly visitors have now surpassed 50 million, and I will personally be surprised if within the next year mobile readership doesn’t comprise at least half of the total readership sum. And so with the widespread use of mobile phones, comes a demand for marketing to their users. There are 5 important points about marketing for mobile phones and they are:

Mobile Is Growing Faster Than All Other Ad Formats Mobile is growing faster than all other digital advertising formats in the US, as advertisers begin allocating dollars to catch the eyes of a growing class of "mobile-first" users. Historically, there has been a big disparity between the amount of time people actually spend on their smartphones and tablets (significant and growing), and the amount of ad money spent on the medium (still tiny). But BI Intelligence expects that this gap will narrow substantially, as enthusiasm grows for mobile-optimized ad formats (such as interactive rich media and native ads), as targeting improves, and more and more advertisers learn how to effectively use the platform. New data from BI Intelligence finds that US mobile ad spend will top nearly $42 billion in 2018, rising by a five-year compound annual growth rate (CAGR) of 43% from 2013. The report looks at the most important mobile ad formats, including display, video, social, and search.