Resources for Creating a Makerspace 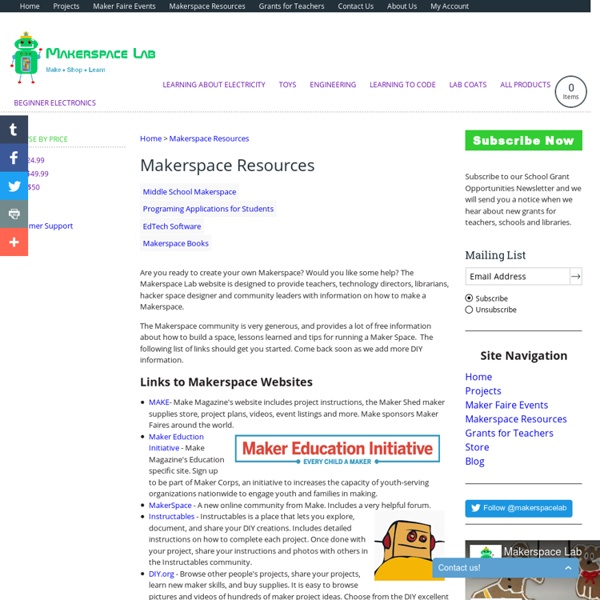 Are you ready to create your own Makerspace? Would you like some help? The Makerspace Lab website is designed to provide teachers, technology directors, librarians, hacker space designer and community leaders with information on how to make a Makerspace. The Makerspace community is very generous, and provides a lot of free information about how to build a space, lessons learned and tips for running a Maker Space. The following list of links should get you started. Come back soon as we add more DIY information. Links to Makerspace Websites MAKE- Make Magazine's website includes project instructions, the Maker Shed maker supplies store, project plans, videos, event listings and more. Maker Eduction Initiative - Make Magazine's Education specific site. Links to Makerspaces and Hackerspaces MakerSpaces for Kids, at Schools, Libraries and Community Spaces Creating Self-Sustaining Recess/Lunch-Time Makerspace Visits - Ravenswood School District started creating their Makerspace in 2013.

The Way of the Lego I've had some emails and Tweets lately asking how do I manage the LEGO portion of our Makerspace area, so I thought I would share with you... The Way of the Lego. Questions: How did you set up your Lego Creation Station? The Makings of a Makerspace: Three Examples In late October, 2013, I visited several makerspaces in the bay area crammed into one day, and blogged about my discoveries here. Then, in summer 2014, I visited two more makerspaces and blogged about those here. Most recently, the fabulous Jaymes Dec hosted me at Marymount in NYC, Kat Sauter hosted me at Ann Richards STARS in Austin (whom I also visited back in 2013 before their makerspace!), and Ross Monroe hosted me at Edmonds Community College here in Seattle.

Designing a School Makerspace Makerspaces, STEAM labs and fab labs are popping up in schools across the country. Makerspaces provide hands-on, creative ways to encourage students to design, experiment, build and invent as they deeply engage in science, engineering and tinkering. A makerspace is not solely a science lab, woodshop, computer lab or art room, but it may contain elements found in all of these familiar spaces. Therefore, it must be designed to accommodate a wide range of activities, tools and materials.

How to Solder - Through-hole Soldering Introduction Soldering is one of the most fundamental skills needed to dabble in the world of electronics. The two go together like peas and carrots. 6 Essential Tips for Designing Your Makerspace’s Layout When planning a makerspace, most think about designing for creativity. It’s important to think about the types of projects that will be completed in the space, how many people will use the space at any given time, and the equipment on your must-have versus nice-to-have lists. However, there are also a few considerations that often go overlooked. Nansemond-Suffolk Academy, a fully-accredited private school serving students in pre-kindergarten through twelfth grade with two locations in Suffolk, Virginia

Setting Up Your Own MakerSpace Since you already know that you want to set up a MakerSpace you know that it is an area that provides hands-on, creative ways for students to design, experiment, and invent as they engage in science, engineering, and tinkering.” (definition from edutopia) Before I started making specific plans for a MakerSpace in my library, I started reading everything that I could get my hands on that would inform me about such a space. I read online, searched out other libraries, schools, classrooms, and communities that had MakerSpaces, hit the library and Amazon looking for books about MakerSpaces, visited several MakerSpaces in the area, read blogs about MakerSpaces, and followed makers on Twitter. Even though I have a MakerSpace up and successfully running, I am still seeking out any information I can that will improve my space for my students.

Create a school makerspace in 3 simple steps As maker education gains steam, many educators are looking for ways to incorporate making and tinkering into their schools and classrooms — often on a shoestring budget. “Kids are saying they want to learn more about technology and science, but they also want to experience it creatively and use it personally,” said Dale Dougherty, founder of Make Media, which produces Maker Faire and Make Magazine. He’ll address how educators can deliver these types of experimental learning experiences during ISTE 2014’s EdTekTalks, a provocative series of mini-keynotes from thought leaders beyond the world of ed tech. “One of the ways we can do that is create more makerspaces for kids. Part of my talk will be leading the charge to say let’s build more makerspaces inside schools, libraries and even community centers.”

The True Adventures of a High School Librarian: JCHS MakerSpace a Go Go! The adventure of creating a MakerSpace in the James Clemens High School library has taken off with a lot of help from my friends! Once my principal, Dr. Brian Clayton, approached me about bringing a MakerSpace to the JCHS Library this year the first thing I did was crowd source my amazing PLN for ideas and resources. Some the top contributors that helped me to ultimately build my final list of items to purchase for the start of our MakerSpace includes: Diana Rending, Nathan Stevens, Laura Fleming, Tom Kilgore, Mark Samburg, and Faith Plunkett. My daughter's boyfriend, Damien Owen, was also a great help to me. I would call, text and email him often as he loves to tinker with electronics, LEGOs and robotics.

Defining Makerspaces: Part 1 Recently, I had the unfortunate experience of dealing with criticism. I was told (not to my face) by a visitor to our school that our library makerspace is not a “real makerspace”. This same person stated that our woodshop is a “real makerspace” because it has power tools. How to Turn Any Classroom Into a Makerspace There is a certain magic found in rolling up your sleeves and tackling a project head on, an undeniable sense of empowerment that results from solving problems and manifesting big ideas. In essence, that’s the soul of the maker movement — creative individuals from all walks of life united by an insatiable desire to improve the world around them. Although synonymous with 3D Printing, it extends far beyond a single technology or buzzword. Truth be told, the maker movement represents the instinctual drive of our species to ascend ever upwards: to innovate, design, and construct a better tomorrow. Why the Maker Movement is Relevant to Education Image via Flickr by Exploratorium