Online Books : "TIHKAL" - The Continuation" by Alexander and Ann Shulgin 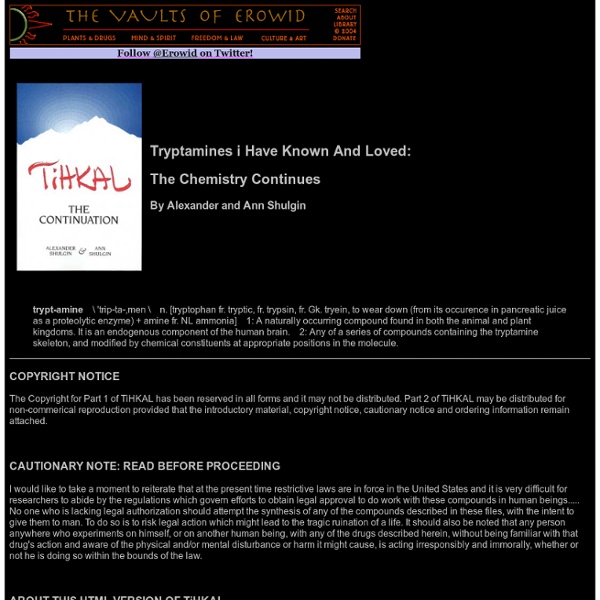 Diethyltryptamine Chemistry[edit] DET is an analogue of the common tryptamine hallucinogen N,N-Dimethyltryptamine or DMT. Pharmacology[edit] The mechanism of action is thought to be serotonin receptor agonism, much like other classic psychedelics.[2] DET is sometimes preferred over DMT because it can be taken orally whereas DMT cannot. Biochemistry[edit] Though DET is a synthetic compound with no known natural sources it has been used with mycelium of Psilocybe cubensis to produce the synthetic chemicals 4-PO-DET (Ethocybin) and 4-HO-DET (Ethocin), as opposed to the naturally occurring 4-PO-DMT (Psilocybin) and 4-HO-DMT (Psilocin). Psychosis model[edit] See also[edit] References[edit] External links[edit]

Modern Shamanism, by Serge Kahili King Article Modern Shamanism by Serge Kahili King "You look more modern than I thought you'd be," said the visitor as we sat in my comfortable living room overlooking the ocean that surrounds the island of Kaua'i. His remark was typical of many visitors who expect - perhaps even hope - to find me wearing some kind of robe or sarong and living in primitive simplicity in a cave or a forest far away from the amenities of civilization. In the old and ancient days the shaman - who was a healer of mind, body and circumstances - was right in the midst of tribal or village life. Now shamanism is experiencing a revival of interest and freedom. A modern shaman (or "urban" shaman, as I often say) is one who uses the ancient knowledge in the context of our present social and cultural environment. Shaman knowledge has to do with an awareness of, and the ability to direct, the powers of mind and the forces of nature. Integration is more difficult in today's society because of its variety and complexity.

Ayahuasca and the Vines of Politics « Psychedelic Press UK Salvation by drfranken The following article has been written and contributed to PsypressUK by the Reverend Nemu, author of Nemu’s End: The History, Psychology, and Poetry of the Apocalypse and the Nemu’s End blog, with special thanks to the other Devilish Dan. We’d like to extend our thanks to the Reverend for his time and effort writing this article. After bubbling and brewing away for millennia in the Amazon, ayahuasca began seeping out through the foliage at the turn of the 20th century. Ayahuasca contains N,N-Dimethyltryptamine (DMT), which is internationally scheduled under the Convention on Psychotropic Substances. Media interest in the UK began in 1996. The press tended to follow this format, beginning with confusion, nausea, or occasionally terror, and concluding with a degree of respect for the “gentle, kind and thoughtful” [iv] members of the community, or asking “why shouldn’t they do what they do?” Mr. Demeter by drfranken Canadian customs seized some tea in 2000.

Cocaine Cocaine (INN) (benzoylmethylecgonine, an ecgonine derivative) is a crystalline tropane alkaloid that is obtained from the leaves of the coca plant.[5] The name comes from "coca" and the alkaloid suffix "-ine", forming "cocaine". It is a stimulant, an appetite suppressant, and a nonspecific voltage gated sodium channel blocker, which in turn causes it to produce anaesthesia at low doses. Biologically, cocaine acts as a serotonin–norepinephrine–dopamine reuptake inhibitor, also known as a triple reuptake inhibitor (TRI). It is addictive due to its effect on the mesolimbic reward pathway.[6] It is markedly more dangerous than other CNS stimulants, including the entire amphetamine drug class,[7] at high doses due to its effect on sodium channels, as blockade of Nav1.5 can cause sudden cardiac death. Unlike most molecules, cocaine has pockets[clarification needed] with both high hydrophilic and lipophilic efficiency, violating the rule of hydrophilic-lipophilic balance. Medical effects Acute

"Ayahuasca and Creativity" -- Benny Shanon, Ph.D. Ayahuasca and Creativity Benny Shanon, Ph.D., Department of Psychology, The Hebrew University PDF version of this document As indicated in previous publications (Shanon, 1997, 1998a, 1999) I am a cognitive psychologist who is studying the phenomenology of the ayahuasca experience. My study is based on extended firsthand experience as well as on the interviewing of a great number of persons in different places and contexts. In the publications cited the reader can find background information about both ayahuasca and the program of my research; for further theoretical discussion, see my forthcoming book The Antipodes of the Mind: Charting the Phenomenology of the Ayahuasca Experience. Phenomenologically, the effects of ayahuasca are multifarious -- they include hallucinatory effects in all perceptual modalities, psychological insights, intellectual ideations, spiritual uplifting and mystical experiences. As explained in Shanon (1998b), ayahuasca can also induce very impressive ideations.

The Heroine of Heroin – Upvoted Tracey Helton (Reddit user traceyh415) is the focus of this week’s episode. We discuss her depression growing up, how she became addicted to heroin, life as a homeless heroin addict, being the subject of the HBO documentary Black Tar Heroin, how she got clean, her involvement in harm reduction, how she got involved in Reddit’s opiates community, Naloxone, and how she saved the lives of over 120 users by sending naloxone to those with no access. Hold On "I lived in an all-female Pentecostal 'discipleship program' in rural Arkansas ... The Wave "Sailing remains one of the best things in my life. Four Walls and a Roof (Part One) "Our tent is a house. Tryptoline Tryptoline, also known as tetrahydro-β-carboline and tetrahydronorharmane, is a natural organic derivative of beta-carboline. It is an alkaloid chemically related to tryptamines. Derivatives of tryptoline have a variety of pharmacological properties and are known collectively as tryptolines. Pharmacology[edit] Tryptolines are also potent reuptake inhibitors of serotonin and epinephrine, with a significantly greater selectivity for serotonin. Although the in vivo formation of tryptolines has been a matter of controversy, they have profound pharmacological activity. There is evidence that tryptolines may be potent neurotoxins that may play a role in Parkinson's Disease[1] See also[edit] References[edit] H.