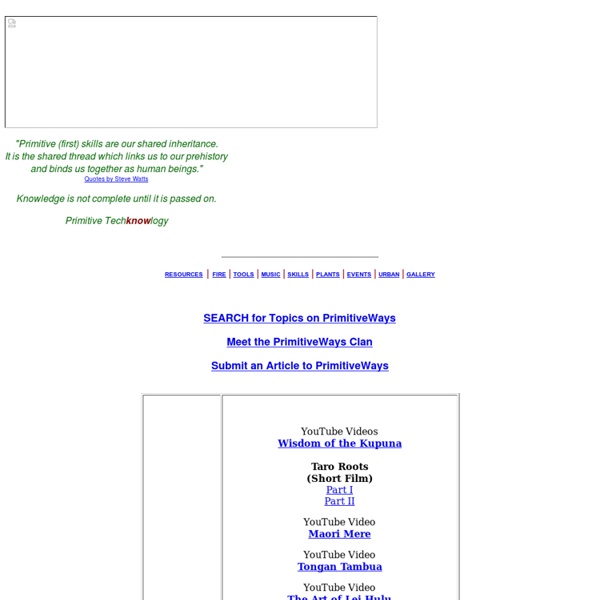 "Primitive (first) skills are our shared inheritance. It is the shared thread which links us to our prehistory and binds us together as human beings." Quotes by Steve Watts Knowledge is not complete until it is passed on. PrimitiveWays began in 1998 and is produced by Dino Labiste, Dick Baugh, Bob Gillis, Norm Kidder, Chuck Kritzon, Ken Peek and Susan Labiste. E-mail your comments to "Dino Labiste" at KahikoArts@yahoo.com, "Bob Gillis" at bob@shelter-systems.com, "Richard A.

Manual for Building a c. 40 lb. Longbow - (on 'The Beckoning') I would like to give a special thanks to Hans Schuurman for writing the Dutch version of this manual, and to Dick De Bruin for all of his work on the translation. Dick De Bruin has put a great deal of his precious time into this so that I could put this page on my web site. Numerous revisions have gone back and forth between us, and his patience is greatly appreciated. Both Hans and Dick are members of Roger Ascham, Traditional Archery, a club associated with the British Longbow Society, and I invite you to visit them. If Mr.

Stone Age Engineering The book Stone Age Engineering, by Dick Baugh, is now available. This is a collection of all the articles on primitive technology he has written for the Bulletin of Primitive Technology, PrimitiveWays.com and the American Journal of Physics. It is printed on high quality paper with a high tech printer. This means the photos are much better than before. Excepts from the back of the book: "This is a collection of articles I have written on prehistoric and not quite prehistoric technology. The articles were originally published in the Bulletin of Primitive Technology, the PrimitiveWays.com web site and the American Journal of Physics.

How to Make a Primitive Funnel Fish Trap that keeps on giving. Passive trapping versus active hunting is almost always preferred in a survival scenario. Not only does trapping typically require less energy, but it also enables one to focus on other important survival tasks such as shelter, fire, water, foraging and signaling. Passive fish traps are among some of the oldest documented relics from indigenous cultures all over the globe. Stone weirs built many hundred years ago in rivers and low tide areas still exist today. Funneling fish for easier capture was a strategy used to put food on the table in almost every primitive culture.

Derek Hutchison Native Wood Self Bows I've been making bows of all types (Longbows, flatbows, composites & crossbows) for over 40 years. It is self bows (bows made from one piece of timber rather than laminated) which are my main passion.I'm based just north of London in the UK. This site shows some of the bows I've made, with some hints, tips and my bowyer's blog (which is the main source of info if you are making a bow).There are a few videos too, the Chinese Repeating Crossbow being perhaps the most unusual. (Ok it's not a self bow...) Click on the blue page links to the left to see the different timbers and styles of bow.

Ropes and Poles: Hypar pavilion - inspired by Felix Candela 'Hypars' (hyperboloids) are a type of structure that have been used in pioneering since the 1960s. They are based on a type of lightweight engineering structure used to build in concrete. This six-sided structure is inspired by Felix Candela's Restaurant in Valencia (photo by festeban). Although they look complicated, these structures have a secret that makes them a little easier to build- all of the strings used are pulled tight in straight lines. This means that you don't need to worry about how the curve gets formed- it is a natural result of tying all the straight lines. Wind-Powered Oil Press Makes Homemade Oils an Easy Breezy Task (Video) © Dave Hakkens From sunflower to walnut, linseed and pumpkin, making your own edible oils using hand-cranked oil presses can be a tedious (but satisfying and money-saving) task. But add a little wind energy, and it's that much easier; as one can see with Dutch designer Dave Hakkens' wind-powered oil press which uses a simple assembly of components to make fresh, homemade, cold-pressed oils. Check out the video (apparently the bottle in the vid took about 60 nuts to create): Windoil by Dave Hakkens from Dezeen on Vimeo. © Dave Hakkens

Yew bow staves for sale, Hickory, Bamboo. Hickory bending staves. These staves are roughed out bows already bending and ready for you to tiler and finish yourself. They come 72 inches long, and can handle almost any bow design if made correctly. This is a great first project. 2 staves $100 + $20 shipping. Hickory backed with Bamboo staves. Tarp Shelters FAQ - Tarp Sheltersan introduction by DBM This page was contributed by "DBM", who requested that his email address not be listed. It was supplied in Word doc format and converted automatically to html. The conversion may not be perfect.