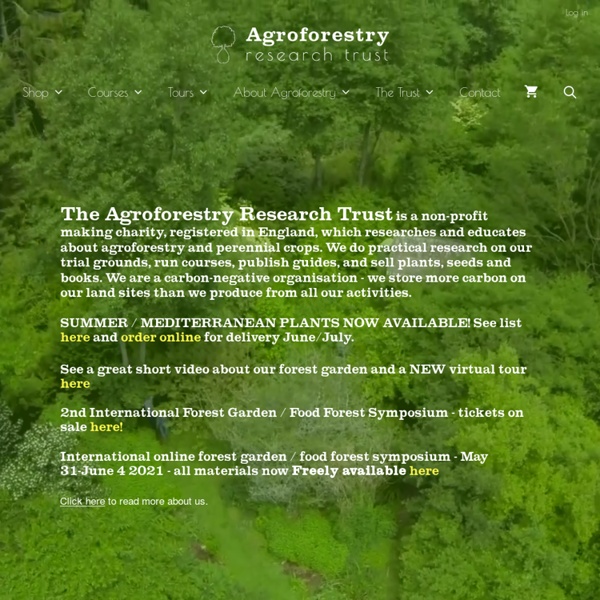 Agroforestry Research Trust The Agroforestry Research Trust is a non-profit making charity, registered in England, which researches into temperate agroforestry and into all aspects of plant cropping and uses, with a focus on tree, shrub and perennial crops. We produce several publications and a quarterly journal, sell various other relevant books, and also sell plants (particularly fruit and nut trees and bushes), seeds and Parafilm grafting tape. NEW: We have a few great hand-cranked nutcracking machines available - see here A short video about our forest garden can be viewed here Listen to Martin Crawford on BBC Radio 4:

International Day Against Tree Monocultures - 2012 Welcome to the new WRM website We are updating our website to provide a more user-friendly platform for our visitors. While this transition is in process, some of our... Read More The Complete Shobogenzo thezensite: The Shōbōgenzō The Shōbōgenzō (Treasury of the True Dharma Eye) is the master work of the Japanese Sōtō Zen Master Eihei Dōgen (1200 - 1253). It consists of a series of lectures or talks given to his monks as recorded by his head monk, Ejo, who became his Dharma successor although Dōgen was involved in the editing and recording of some of the Shōbōgenzō. This is the first major Buddhist philosophical work composed in the Japanese language.

Go Gluten-Free! Celiac disease and gluten sensitivities have become central topics in talks about health among Canadians. Although you might have heard about celiac or gluten sensitivities, you might be wondering what exactly is gluten, and how could it affect you. Gluten is a protein present in grains such as wheat, rye and barley and a staggering 77% of grain products consumed in Canada are wheat base which means that gluten in abundantly present in our diets! There are two ways that gluten can affect Canadians – celiac disease or gluten sensitivity. Celiac disease is a chronic autoimmune disease triggered by the consumption of gluten. It causes the small intestine to produce antibodies that, in turn, damage the small intestine.

Agroforestry Agroforestry or agro-sylviculture is a land use management system in which trees or shrubs are grown around or among crops or pastureland. It combines shrubs and trees in agricultural and forestry technologies to create more diverse, productive, profitable, healthy, ecologically sound, and sustainable land-use systems.[1] As a science[edit] The theoretical base for agroforestry comes from ecology, via agroecology.[2] From this perspective, agroforestry is one of the three principal land-use sciences. The other two are agriculture and forestry.[3]

Charlie Hague and Megan Williams told to pull down their 'hobbit home' made entirely out of natural materials Family of three is made homeless by planning inspector's decisionThey built their home from scratch, but have been ordered to tear it downThe couple admit they built it without first getting planning permissionTheir labour of love was branded 'harmful' to the countryside By Stuart Woledge Published: 19:30 GMT, 1 August 2013 | Updated: 14:12 GMT, 2 August 2013 Homeless: Charlie Hague and Megan Williams, with their only child Eli, have been left homeless Lettre ouverte aux GOUVERNEMENTS NATIONAUX concernant le 21 septembre, Journée mondiale de lutte contre la monoculture d’arbres Welcome to the new WRM website We are updating our website to provide a more user-friendly platform for our visitors. While this transition is in process, some of our... Read More PRESS RELEASE: International campaign to define Forests by their true meaning!

Ragged Claws Network Back in 2008, Mike Lynch posted a bunch of cartoons that he had scanned from Ever Since Adam and Eve, edited by Alfred Andriola and Mel Casson, who dedicated the book to the National Cartoonists Society. Here are the links: Featured artists include Alfred Andriola, Stan and Jan Berenstain, Walter Berndt, Milton Caniff, Irwin Caplan, Al Capp, George Clark, Chon Day, Gregory D’Alessio, Harry Devlin, Rube Goldberg, Harry Hanan, Al Hirschfeld, Hank Ketcham, Frank King, George Lichty, Marty Links, Kate Osann, Russell Patterson, Alex Raymond, Carl Rose, Charles Schulz, Ronald Searle, Barbara Schermund, Noel Sickles, Otto Soglow, Henry Syverson, J. W. Taylor, Hilda Terry, and Mort Walker. Comment devenir végétarien-ne / How to Become a Vegetarian While being a vegetarian isn’t for everyone (and neither is Pamela Anderson), I talk to lots of people every day who tell me they’d like to become vegetarian, but it seems like it would be too hard, and they don’t have the willpower. But becoming a vegetarian, for me and for many others, is the easiest thing in the world. If you’re not interested in becoming vegetarian or vegan, please skip this post (and don’t flame me in the comments).

Agroforestry and the Built-Environment – By Spencer Woodard « Note: This is a portion of an essay I wrote a number of years ago (in 2007) and is best read in conjunction with two additional articles I have posted on this site: Chinampa: Raised-Bed Hydrological Agriculture and The Domesticated Landscapes of Los Llanos de Moxos, Bolivia. Any questions or comments from readers can be posted in “comments”. I will do my best to offer a prompt reply.