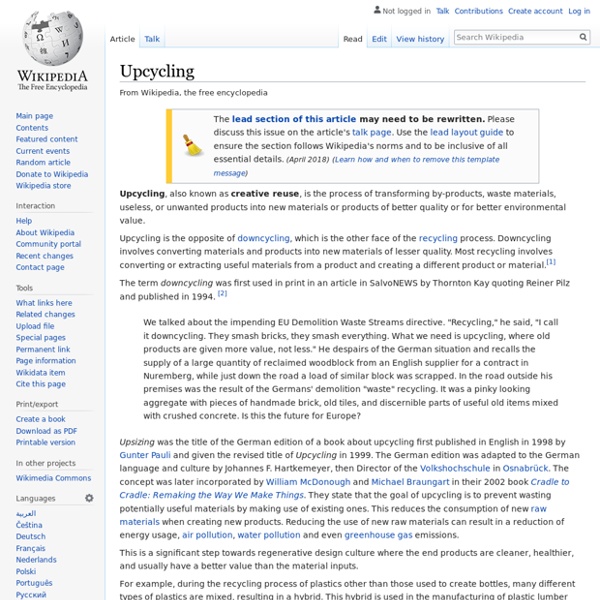 Upcycling, also known as creative reuse, is the process of transforming by-products, waste materials, useless, or unwanted products into new materials or products of better quality or for better environmental value. Upcycling is the opposite of downcycling, which is the other face of the recycling process. Downcycling involves converting materials and products into new materials of lesser quality. Most recycling involves converting or extracting useful materials from a product and creating a different product or material.[1] The term downcycling was first used in print in an article in SalvoNEWS by Thornton Kay quoting Reiner Pilz and published in 1994. [2] We talked about the impending EU Demolition Waste Streams directive. Upsizing was the title of the German edition of a book about upcycling first published in English in 1998 by Gunter Pauli and given the revised title of Upcycling in 1999. Upcycling has shown significant growth across the United States. In art[edit] In music[edit]

Danube Bridge Project The Danube bridge project is set to become the largest upcycling project of its kind! The City of Linz in Austria is having a creative contest to solve the challenge of how to upcycle its 120 year-old bridge. This public innovation project is aimed at architects, engineers, designers and artists from Linz, Austria as well as the rest of the world. Linz is the third largest city in Austria, with a population of 198,000. Linz is asking the creative community to come up with innovative ideas to preserve elements of the old bridge, and upcycle it into a functional public space. The Danube bridge project is open to ideas from around the world. 27 complex architectural solutions have already been submitted in the online campaign, which runs until August 31st. The Danube bridge project brief asks designers to create an innovative concept to upcycle elements of the old bridge in Linz. a. Want to enter the competition? What is your best Danube bridge project idea? Related Bat-Yam Pavilion

The 25 Hottest Sustainability Professionals Marks & Spencer’s Plan A is Hot Hottest lists, are well, hot. So I thought I would start April with a list of the hottest 25 sustainability professionals. After all, sustainability is HOT–but the best way to comprise a list of sustainability stars is to focus on brains, compassion, dedication, impact and of course, more brains. We won’t wade into the spit-spat between Complex Magazine and Pando Daily, which recently issued some top 40 lists of the hottest tech professionals–again, this list is focused on intellect and results. Full disclosure: this is actually a list of 26. Elaine Cohen: Elaine’s knowledge and analysis of corporate social responsibility and sustainability reports ranks among the top leaders within this space. Mary Capozzi: Best Buy’s Senior Director of CSR has been instrumental in pushing other retailers and manufacturers to follow her company’s lead and improve the recycling of electronics. Susan McPherson: Running the CSR practice for Fenton, Ms. Marcy Murninghan: Dr.

Wikipedia :: Freecycling Freecycling, or free recycling, is the act of giving away usable unwanted items to others instead of disposing of them in landfills.[1][2][3] This term is most often associated with online groups who run mailing lists which offer items to members at no cost. For a period The Freecycle Network claimed they held a trademark on the word "Freecycle" and claimed the term freecycling to be a violation of their trademark rights. However they lost this claim – and rights to the "Freecycle" trademark – in United States federal court in November 2010.[4] In her ruling Judge Callahan stated unequivocally that "Beal did not coin the word “freecycle” and TFN is not the first organization to promote freecycling" and that "even ... viewing the evidence in the light most favorable to TFN ... [they] engaged in naked licensing and consequently abandoned the trademarks."[4][5] See also[edit] References[edit] External links[edit]

Wikipedia :: Repurposing African music instrument made from a food can Repurposing is the process by which an object with one use value is transformed or redeployed as an object with an alternative use value. Description[edit] Repurposing is as old as human civilization, with many contemporary scholars investigating that way that different societies re-appropriate the artifacts of older cultures in new and creative ways. [1] More recently, repurposing has been celebrated by 21st century hobbyists and arts-and-crafts organizations such as Instructables and other Maker culture communities as a means of creatively responding to the ecological and economic crises of the 21st century. Repurposing is the use of a tool being re-channeled into being another tool, usually for a purpose unintended by the original tool-maker. Examples[edit] Skis repurposed as a bench A ladder repurposed as a coat rack in Sardinia Railway line repurposed as farm fencing corner post An improvised cowbell, used for sheep or goats. See also[edit]

Common Misconceptions | Plastic Pollution Coalition The Recycling Myth Collecting plastics at curbside fosters the belief that, like aluminum and glass, these will be converted into new similar objects. This is not the case with plastic. The best we can hope for plastics is that these will be turned into other products such as doormats, textiles, plastic lumber, etc. These products will still end at some point in the landfill – and do not stem the need for more virgin petroleum product. This is not recycling, but down-cycling. But not even down-cycling is happening. How big is the problem? Artist Chris Jordan offers the following visualizations. Please visit Plastic Free Times for great resources on recycling. Ocean Clean-ups By most estimates, hundreds of millions of metric tons of plastic debris currently floats in the ocean. Bioplastics Bioplastics are just plastics made from plants.