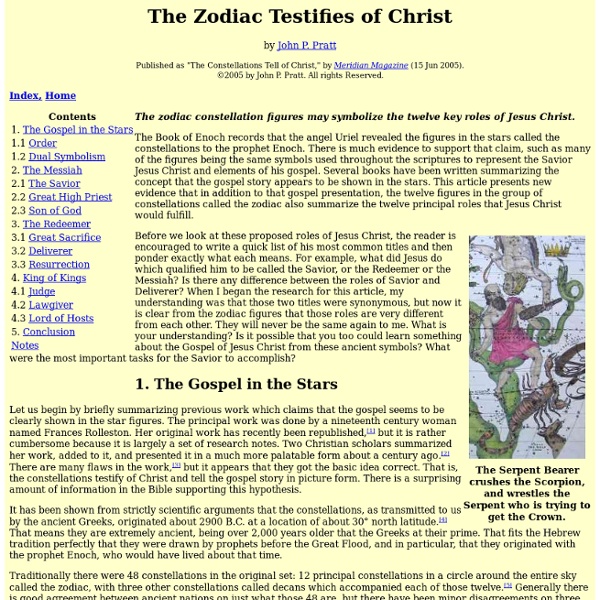 by John P. Pratt Published as "The Constellations Tell of Christ," by Meridian Magazine (15 Jun 2005). ©2005 by John P. Pratt. All rights Reserved. Index,Home The zodiac constellation figures may symbolize the twelve key roles of Jesus Christ. The Book of Enoch records that the angel Uriel revealed the figures in the stars called the constellations to the prophet Enoch. Before we look at these proposed roles of Jesus Christ, the reader is encouraged to write a quick list of his most common titles and then ponder exactly what each means. 1. Let us begin by briefly summarizing previous work which claims that the gospel seems to be clearly shown in the star figures. It has been shown from strictly scientific arguments that the constellations, as transmitted to us by the ancient Greeks, originated about 2900 B.C. at a location of about 30° north latitude.[4] That means they are extremely ancient, being over 2,000 years older that the Greeks at their prime. How did we get the constellations?

4*2*3 The Solution to the Riddle of the Sphinx « Reconciliation of Science and Religion This post suggests to answer what the real significance of the sequence ‘4 2 3’ in the Riddle of the Sphinx is pointing us toward. I believe I am the first to solve this riddle the way it was intended, on another level, on a level I found quite by accident. Whoa…there I go again, making another outlandish claim. But have you noticed lately that I actually do provide damn good proof to many of my outlandish, mad claims? How to read your Birth Chart - A Key to the Symbols The language of astrology is a symbolic one, and it has its own alphabet! This shorthand alphabet, or collection of symbols (also called glyphs, or sigils) is one that we need to learn if we are to be able to interpret a horoscope chart. Each symbolic glyph has a standard meaning, though, like a gem, it has many subtle facets which come to light when interpreted in a delineation of the chart. The symbols fall naturally into four main groups: Signs of the ZodiacPlanets and planet-like itemsAspects, both major and minorOther useful symbols

Birthday Numerology How to Use Birthday Numerology I have included this brief guide on birthday numerology for the purpose of better understanding how numbers are symbols, and how these symbols play a part in our lives. As mentioned on the Spiritual Meaning of Numbers page, every number has a certain power that expresses it's connection to the universe. Numbers have relationships with all things in nature, thus making them supremely powerful symbolic expressions. Dendera zodiac Coordinates: The Dendera zodiac as displayed at the Louvre Dates of eclipses[edit] Solar eclipse on 7 March 51 BC Sylvie Cauville of the Centre for Computer-aided Egyptological Research at Utrecht University and Éric Aubourg dated it to 50 BC through an examination of the configuration it shows of the five planets known to the Egyptians, a configuration that occurs once every thousand years, and the identification of two eclipses.[3] The solar eclipse indicates the date of March 7 51 BC, it is represented by a circle containing the goddess Isis liking an animal (wild boar) by the tail.

Spiritual Meaning of Numbers Every number has a certain power which is expressed both by its symbol to denote its representation and by its connection to universal principles. Numbers have relationships with all things in nature, thus making them supremely powerful symbolic expressions. At its most basic, numerology is the study of numbers and their influence in our lives, but there is so much more potential. I love numerology because it's a thread of understanding that can be pulled, and pulled and pulled - ad infinitum. Numerology offers so many facets to understanding a single event. Mayan Tzolkin Calendar There were 20 individual named days, as shown in the table below: Day Gods Each of the twenty days is linked to a different god in Mayan mythology[2] Imix : 'Crocodile' - the reptilian body of the planet earth, or world Ik : 'Wind' - breath, life. Also violence.

Divination, Intuition, Perception, Scrying, Dowsing, Psychic Abilities, Divination Games, Divination Tools at Peacefulmind.com Divination Tools Divination Methods Divination itself can take various forms, including: Zodiac The Earth in its orbit around the Sun causes the Sun to appear on the celestial sphere moving over the ecliptic (red), which is tilted with respect to the equator (blue-white). In both astrology and historical astronomy, the zodiac (Greek: ζῳδιακός, zōidiakos) is a circle of twelve 30° divisions of celestial longitude that are centered upon the ecliptic, the apparent path of the Sun across the celestial sphere over the course of the year. The paths of the Moon and visible planets also remain close to the ecliptic, within the belt of the zodiac, which extends 8-9° north or south of the ecliptic, as measured in celestial latitude. Because the divisions are regular, they do not correspond exactly to the twelve constellations after which they are named.