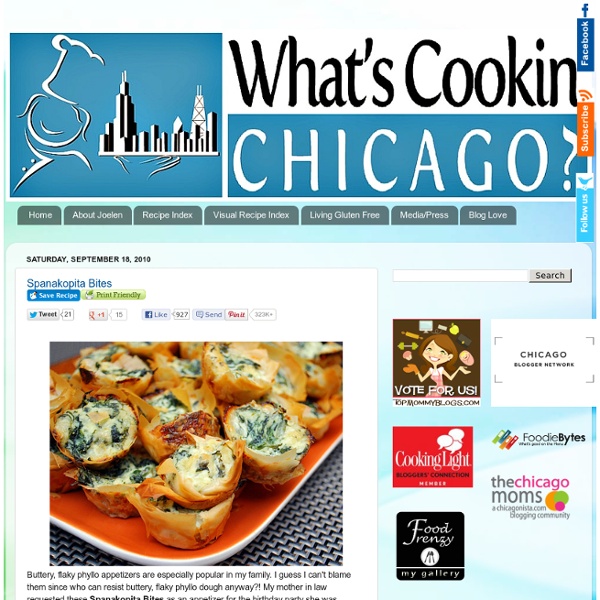 Buttery, flaky phyllo appetizers are especially popular in my family. I guess I can't blame them since who can resist buttery, flaky phyllo dough anyway?! My mother in law requested these Spanakopita Bites as an appetizer for the birthday party she was throwing for her husband. They were a hit with no leftovers, which is no surprise. I firmly believe that anything paired with butter and phyllo dough would be hard to resist...right? These spanakopita bites are a twist on the classic spanakopita recipe I tend to make. Spanakopita Bites recipe adapted from CBSrecipe yields 60-72 mini muffin sized bites 1 Tablespoon vegetable oil 1 small onion, chopped 3 green onions, chopped 10 ounces frozen chopped spinach. thawed and squeezed dry 4 to 6 ounces domestic feta cheese, crumbled 1 cup cottage cheese OR ricotta cheese OR cream cheese 1 egg Salt and pepper to taste 1 pound phyllo, thawed 8 tablespoons butter (1 stick), melted 2 tablespoons vegetable oil Preheat oven to 375 degrees

Jalapeño Popper Dip That’s right, you heard it here- Jalapeño Popper Dip! I love jalapeño poppers and have even tried to make them, which didn’t turn out as well as their purchased cousin and were pretty labor intensive. The word labor makes me run the other way. Have you ever made poppers before? Dealing with jalapeños is quite an undertaking as one has to be very careful not to burn their hands or rub their eyes during the process. Just look at that thick layer of prebaked crust. I took this appetizer to a neighborhood gathering last Saturday and everyone really liked it- a lot. Look at that beautiful golden crust atop a bubbly creamy and flavorful base. Jalapeño Popper Dip2- 8 ounce packages cream cheese, room temp1 cup mayonnaise1 cup shredded Mexican blend cheese1/2 cup Parmesan cheese1- 4 ounce can chopped green chilies1- 4 ounce can sliced jalapeños- double if you like heat 1 cup panko bread crumbs1/2 cup Parmesan cheese1/2 stick butter, melted For other delicious dips and spreads:

idaho sunrise (baked eggs and bacon in potato bowls) Idaho Sunrise (Baked Eggs & Bacon In Potato Bowls) Ok, what is up with eggs?!!? They seem to be in everything lately! From topping pizzas, to burgers (shout out to Blanc, for KC locals!), to garnishing soups…apparently the incredible, edible egg is now tres chic. One creative idea for baking eggs that seemed new and notable (at least to me) is this great recipe I stumbled across online. Definitely a fun twist on the typical eggs, bacon and hash browns. Ingredients 1 large baked potato (russett or sweet) 1 Tbsp. butter 2 eggs 2 strips bacon, cooked and crumbled 2 Tbsp. shredded cheddar or gouda cheese 1 Tbsp. fresh parsley, chopped salt and freshly ground black pepper Method Lay the baked potato on its side, and use a knife to carefully cut off the top third of the potato. Place 1/2 tablespoon of butter in the middle of each bowl. Bake at 350 degrees F for 20-25 minutes, or until the egg whites are set. Ali’s Tip: Feel free to experiment with seasonings on these!

Individual Monkey Breads. Biscuits, butter, sugar, cinnamon. I think that’s all I need to say about this one. This stuff is astoundingly good. I grew up with monkey bread, but have never made it with this method - it works wonderfully. I think we’re planning on selling these mini ones at the farmers market. Monkey Breadfrom Ryan via The Pioneer Woman 3 cans Buttermilk biscuits (not the flakey kind)1/2 cup brown sugar1 cup sugar2-3 teaspoons cinnamon2 sticks butter Preheat the oven to 350. Open up all three cans of biscuits and cut each biscuit into quarters. Next, combine the white sugar with 2-3 teaspoons of cinnamon. 3 will be really cinnamon-y. Drop all of the biscuit quarters into a bundt pan (or jumbo muffin cups). Melt the butter with the brown sugar in a sauce pan over medium-high heat until combined. Bake for 30-40 minutes (or 20 minutes for the muffin cup ones) until the crust is deep brown on the top. I should now say that you should let it cool for about 15-30 minutes, but that’s practically impossible.

Secret Recipes and Hummus We all have our secret recipes. Recipes that we are proud of, that we offer to bring to get togethers, and that everyone adores and coos over. After the party is over the bowl has been scraped clean and everyone is asking - nay begging- for your recipe. Naturally you are flattered that everyone has loved it so much to not only finish it all but to beg for the recipe, and you begin sharing the recipe with everyone. Except when it is a secret recipe. Thousands of dollars funding my education in political science has helped me self-diagnose myself as a 'realist' who believes in 'zero-sum gain', as in they feel like only one person can win while everyone else loses. So, I have concluded that I am probably insane, and like most insane people I need to rehabilitate back into normal society. Especially since it seems that when I share my secret recipes everyone else seems to love them as much as I do! Today I am sharing with you my 'secret' but now not so secret hummus recipe. Directions: 1.

fromage fort I think we should all go to a party. And we should all eat this. I know, it doesn’t look like much. I am sure you’ve seen cheese spread on a slice of baguette before. You know that thing that happens when you have friends over? Translated as “strong cheese,” it’s a delightfully economical blend of whatever odds and ends of cheese you have around, some wine, garlic, salt, pepper and herbs, if you’re feeling it. Fromage fort is forgiving. Fromage Fort As I mention above, there are no rules as to how you put this together. If you’re curious, my formula this time was one part each of blue, brie, goat cheese and gruyere, a handful of chives and a full cup of wine. Blend cheese, butter (if using) and garlic in food processer until combined. Fromage fort can be used right away, or kept in the fridge until needed.

cheesy baked artichoke dip in college i was a waitress and bartender at The Loring Bar & Cafe in Minneapolis. it is where i met alex, so it will always hold a very special place in my heart. it was a really great place to work - cool co-workers, great customers and excellent food. the one thing that we were known for was artichoke dip. i can't tell you how many times i ate that for dinner. it was incredible but since The Loring closed no other artichoke dip has even came close to replacing it. i have tried several recipes for artichoke dip that really sucked. too dry - to heavy - not enough flavor - i have covered them all. but this recipe is the last artichoke dip recipe i will ever need. it is similar to the Loring recipe - dare i say - it might be even better. let me put it this way - this is THE BEST artichoke dip! i apologize for the weird measurements - i doubled the original recipe because it just didn't make enough! alex did a beautiful job of modeling the dip :) Yield: Makes about 2 2/3 cups Preheat broiler.

Saturdays with Rachael Ray - Pack-It-In Pizza Heros | I am a slacker. My taxes still aren’t filed. I had planned on working on 4 new recipes yesterday, cleaning all of my bathrooms, and hoped to get a grasp on my overflowing email inbox. And then I noticed the date. So instead of all of the things on my list that I needed to get done, I worked on taxes. And when the day was coming to a close, all I wanted was a simple dinner. I’ve been hitting the recipe jackpot lately – at least according to my husband. What is your favorite go-to meal when you’ve had a crazy day? Change up pizza night by turning your pizza into a sandwich!! Ingredients 1 pound pizza dough, quartered 1/4 cup extra virgin olive oil, plus more for brushing 1 pound crimini mushrooms, sliced salt and pepper 8 oz thinly sliced pepperoni 8 oz mozzarella, shredded 8 slices swiss cheese marinara sauce, for serving Instructions Lightly flour a work surface. Recipe from www.tasteandtellblog.com

Avocado Fries Oh dear. I never should have done this. This may be one of my biggest mistakes all year. So we’re totally enjoying our grilled avocados, but my husband innocently asks “What else can you do with avocados?” Sigh…. At a buck fifty a pop (at least around here), avocados can easily run up quite a tab on the grocery bill. So, consider yourself warned. Avocado Fries Printable RecipeRecipe Adapted from Sunset Magazine Canola oil for frying1/4 cup flour1 tsp kosher salt2 large eggs, beaten to blend 1 1/4 cups panko (Japanese bread crumbs) 2 firm-ripe medium avocados, pitted, peeled, and sliced into 1/2-in. wedges Grated parmesan for serving (optional) 1. 2. 3. 3.

Spicy Corn Fritters with Raita Corn, or maize, is a traditional ingredient of comfort foods in my native American South. Although less complete nutritionally than several other grains, corn makes up for this with its versatility. Dried and milled, it’s used for our beloved cornbread, spoon bread, and hoecakes. Fresh corn is harvested nine months of the year where I live in Florida and is often on the menu at our house. Ingredients For the raita: 1/2 “English” cucumber 1/2 teaspoon salt 3/4 cup plain yogurt 2 tablespoons chopped fresh mint 1/4 teaspoon ground cumin 1/8 teaspoon cayenne Freshly ground black pepper, to taste For the fritters: Preparation Prepare the raita: Peel and coarsely grate the cucumber, mix with 1/2 teaspoon salt, wrap in a clean tea towel, and firmly wring out to express as much juice as possible. In a separate bowl, whip the egg white until stiff peaks form. Preheat the oil in a large non-stick (or well seasoned cast iron) skillet over a burner set to medium heat. print recipe You might also like...

Pepperoni Knots from Zestuous I had a fun time with this recipe. I wanted to re-create these amazing pizza rolls that I used to order in Manhattan, Kansas, at a place called Gumby’s pizza. I ordered a basketful and dipped them in ranch dressing. That and a tall beer and you could call it a night. My goal though was to make a quick and easy recipe. I know these don’t carry the same traditions as West Virginia Pepperoni Rolls that were introduced to America by immigrant coalminers, but they are a great solution for a super easy snack or appetizer. I experimented a lot with this recipe. At first, I used homemade pizza dough, but that takes a couple hours to proof. This is a super simple recipe. Ingredients 1 can refrigerated garlic breadsticks 16 one-inch slices mozzarella cheese 32 slices pepperoni 1 tablespoon Italian seasoning 1 tablespoon grated Parmesan cheese 1 tsp. kosher salt Instructions Unroll each breadstick and cut them in half. Roll each piece into a log about 6-8 inches long.