Ketamine and near death experience 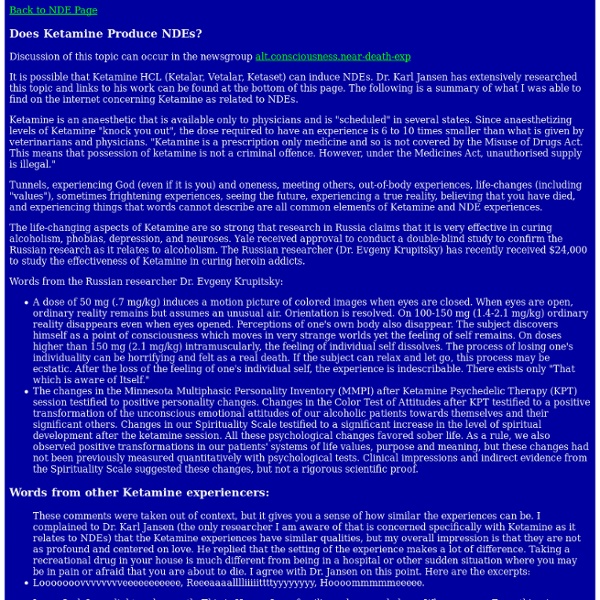 Back to NDE Page Does Ketamine Produce NDEs? Discussion of this topic can occur in the newsgroup alt.consciousness.near-death-exp It is possible that Ketamine HCL (Ketalar, Vetalar, Ketaset) can induce NDEs. Dr. Ketamine is an anaesthetic that is available only to physicians and is "scheduled" in several states. Tunnels, experiencing God (even if it is you) and oneness, meeting others, out-of-body experiences, life-changes (including "values"), sometimes frightening experiences, seeing the future, experiencing a true reality, believing that you have died, and experiencing things that words cannot describe are all common elements of Ketamine and NDE experiences. The life-changing aspects of Ketamine are so strong that research in Russia claims that it is very effective in curing alcoholism, phobias, depression, and neuroses. Words from the Russian researcher Dr. A dose of 50 mg (.7 mg/kg) induces a motion picture of colored images when eyes are closed. How Dangerous is Ketamine?

Near-Death Experiences: 30 Years of Research – Part 1 | Beyond Science | Science DURHAM, N.C.—Grandma was just resuscitated. She wakes up and tells you a bizarre story of coming out of her body and going to heaven. Has she developed psychosis? Was her brain damaged from the lack of oxygen? After over 30 years of research, scientists have concluded that this is not the case. The phenomenon was coined near-death experiences (NDEs) in the 1975 book “Life After Life” by Raymond Moody, M.D. and Ph.D. in philosophy and psychology. Examples of NDEs include experiencing a change in one’s perception and way of thinking, feeling peace or calmness, gaining extrasensory perception (ESP), going through a review of one’s life and seeing the effects of one’s actions on others, a feeling of leaving the body, seeing deceased people and other beings such as angels, and feeling as if one has entered another dimension. NDEs are encountered by people of all backgrounds, and most studies find the prevalence of NDEs to be 10–20 percent of people who have come close to death.

Science of what happens when we die Home»Human Consciousness Project The Human Consciousness Project is an international consortium of multidisciplinary scientists and physicians who have joined forces to research the nature of consciousness and its relationship with the brain, as well as the neuronal processes that mediate and correspond to different facets of consciousness. The Human Consciousness ProjectSM will conduct the world’s first large-scale scientific study of what happens when we die and the relationship between mind and brain during clinical death. The mystery of what happens when we die and the nature of the human mind has fascinated humankind from antiquity to the present day. Since the 1950s and 60s, marked improvements in resuscitation techniques have led to higher survival rates for patients experiencing cardiac arrest. Contrary to popular perception, death is not a specific moment, but a well-defined process.

Near-Death Experiences Explained? Near-death experiences are tricks of the mind triggered by an overload of carbon dioxide in the bloodstream, a new study suggests. Many people who have recovered from life-threatening injuries have said they experienced their lives flashing before their eyes, saw bright lights, left their bodies, or encountered angels or dead loved ones. In the new study, researchers investigated whether different levels of oxygen and carbon dioxide—the main blood gases—play a role in the mysterious phenomenon. The team studied 52 heart attack patients who had been admitted to three major hospitals and were eventually resuscitated. Eleven of the patients reported near-death experiences. During cardiac arrest and resuscitation, blood gases such as CO2 rise or fall because of the lack of circulation and breathing. (Related: "Creepy 'Shadow Person' Effect Conjured by Brain Shocks.") CO2 Only Common Factor in Near-Death Experiences (Related: "Ancient Death-Smile Potion Decoded?") A Glimpse of the Afterlife?

The First Few Minutes After Death After countless accounts of near-death experiences, dating as far back as ancient Greece, science is now taking serious steps forward to explore the nature of the phenomenon. A new project aims to determine whether the experience is a physiological event or evidence that the human consciousness is far more complicated than we ever believed. The Human Consciousness Project sets out to explore the nature of human consciousness and the brain. The first step of the project is the "Awareness During Resuscitation" study, a collaboration among more than 25 medical centers throughout the United States, Canada, and Europe. With the expectation of recruiting 1,500 patients during a 36-month time frame, the study will examine everything that happens to the human brain during cardiac arrest, from oxygen levels to the ability to recall images. The participating hospitals will be outfitted with equipment to monitor any patient who goes into cardiac arrest.

Near-death experience Characteristics[edit] Researchers have identified the common elements that define near-death experiences.[24] Bruce Greyson argues that the general features of the experience include impressions of being outside one's physical body, visions of deceased relatives and religious figures, and transcendence of egotic and spatiotemporal boundaries.[25] Many different elements have been reported, though the exact elements tend to correspond with the cultural, philosophical, or religious beliefs of the person experiencing it: The traits of a classic NDE are as follows: The notice of unpleasant sound or noise (claimed by R. PeaceBody separationEntering darknessSeeing the lightEntering the light He stated that 60% experienced stage 1 (feelings of peace and contentment), but only 10% experienced stage 5 ("entering the light").[30] The distressing aspects of some NDEs are discussed more closely by Greyson and Bush.[33] Cultural variances[edit] NDE variants[edit] Three patterns of distressing NDEs.