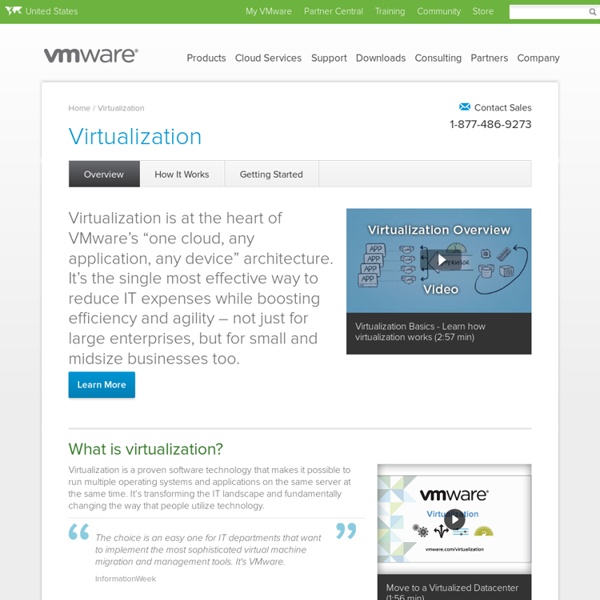 VMware vCenter Design and Installation Options There have always been questions around why, how, and where VMware’s vCenter should be installed and what design option is best. In this article, the author will tackle those questions revolving around vCenter installation so that you know why you chose the option you chose and why it was the best option for you. What Editions of vCenter Are Available? Most people would say that there are just 2 editions of vCenter – standard and foundation.

VMware: Upgrade vCenter Server 5.5 to 6.0 Home > VMware > VMware: Upgrade vCenter Server 5.5 to 6.0 Last week I upgraded VMware vCenter 5.5 server (based Windows 2012R2) at the company environment I work for, the upgrade was very simple. Pre-install: Please check article “Minimum requirements for the VMware vCenter Server 6.x Appliance (2106572)” Installation process – Select: Install VMware VMware, Inc. is a US software company that provides cloud and virtualization software and services,[2][3][4] and claims to be the first to commercially successfully virtualize the x86 architecture.[5] Founded in 1998, VMware is based in Palo Alto, California. In 2004 it was acquired by and became a subsidiary of EMC Corporation, then on August 14, 2007, EMC sold 15% of the company in a New York Stock Exchange IPO. The company trades under the symbol VMW.[6] History[edit] In 1998, VMware was founded by Diane Greene, Mendel Rosenblum, Scott Devine, Edward Wang and Edouard Bugnion.

Install Windows 7 in VMware Virtual Machine Important Information The Elder Geek sites contain many articles and suggestions for modifying the Windows operating system. I've tried these tweaks and tips on many systems. Why is OpenNebula the Solution for Private Cloud Computing? OpenNebula comes with several characteristics that makes it a unique software for the management of private clouds. This is actually not a mere coincidence, but rather a consequence of the design principles followed by the OpenNebula team at the time of creating the architecture and whenever a new feature is planned. So, without a shred of a doubt, we can claim that OpenNebula has the ability of managing Private Clouds embedded in its DNA. Let’s see the three stronger points of OpenNebula when managing a local set of physical and virtual resources, for in-house consumption: Data models adjusted to the datacenters. The entities that OpenNebula work with, as abstractions of the physical and virtual resources, are a reflection of the typical resources found in traditional datacenters.

Virtualizing the Enterprise: An overview Virtualization has its roots in the mainframe era of the 1960s, and is particularly associated with IBM, whose CP-67/CMS was the first commercial mainframe operating system to support a virtual machine architecture in 1968. (CP stands for Control Program, while CMS stands for Console Monitor System; CP created the virtual machines, which ran the user-facing CMS.) PC-era virtualization kicked off in 1987 with Insignia Solutions' SoftPC, which allowed DOS programs to run on Unix workstations. VMware patches virtual machine escape flaw on Windows VMware has released security updates for several of its virtualization products in order to address critical vulnerabilities that could allow attackers to break out of virtual machines and execute rogue code on the host operating systems. The code execution flaws affect the Windows versions of VMware Workstation, VMware Player and VMware Horizon Client. They were discovered by Kostya Kortchinsky of the Google Security Team and stem from a printer virtualization feature that allows a virtual machine's guest OS to access the printer attached to the host computer. "On VMware Workstation 11.1, the virtual printer device is added by default to new VMs, and on recent Windows Hosts, the Microsoft XPS Document Writer is available as a default printer," Kortchinsky explained in an advisory.

Amazon brings NoSQL to the masses with DynamoDB Amazon's new cloud offering called DynamoDB overcomes some of the scaling limitations of SimpleDB. Learn more about the DynamoDB NoSQL system. Cloud computing offerings such as Microsoft Azure and Amazon SimpleDB allow developers to focus on coding without having to worry about the infrastructure. This week we look at Amazon's new cloud service called DynamoDB.

What is VMware VCenter Server? - Definition from Techopedia VCenter Server is installed at the primary server of a virtualized data center and operates as the virtualization or virtual machine manager for that environment. It also provides data center administrators and a central management console to manage all the system's virtual machines. Virtual center provides statistical information about the resource use of each virtual machine and provisions the ability to scale and adjust the compute, memory, storage and other resource management functions from a central application. It manages the performance of each virtual machine against specified benchmarks, and optimizes resources wherever required to provide consistent efficiency throughout the networked virtual architecture. Besides routine management, virtual center also ensures security by defining and monitoring access control to and from the virtual machines, migration of live machines, and interoperability and integration among other Web services and virtual environments.