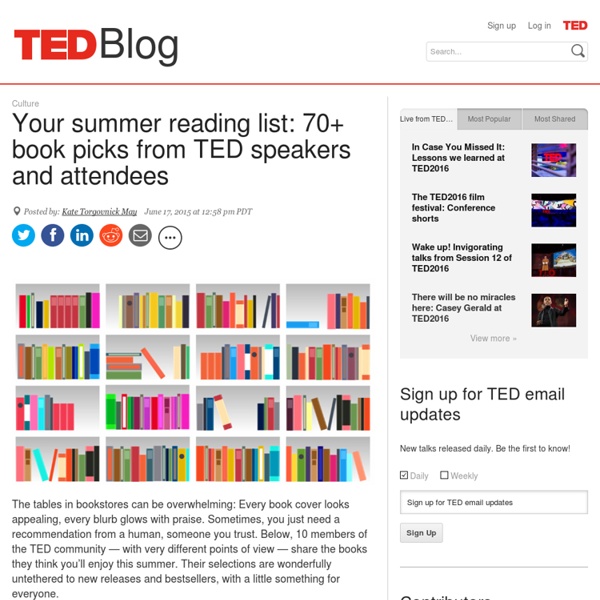 The tables in bookstores can be overwhelming: Every book cover looks appealing, every blurb glows with praise. Sometimes, you just need a recommendation from a human, someone you trust. Below, 10 members of the TED community — with very different points of view — share the books they think you’ll enjoy this summer. Their selections are wonderfully untethered to new releases and bestsellers, with a little something for everyone. Mind-bending fiction, picked by David Eagleman David Eagleman is a neuroscientist whose sensory vest may just expand the limits of human perception. Labyrinths by Jorge Luis Borges. The Bear by William Faulkner. The Most Human Human: What Artificial Intelligence Teaches Us About Being Alive by Brian Christian. The Arrival by Shaun Tan. Invisible Cities by Italo Calvino. The Amazing Adventures of Kavalier & Clay by Michael Chabon. Last and First Men by Olaf Stapledon. Things That Are: Essays by Amy Leach. Books on art and race, picked by Anne Pasternak Related:  To Read

12 Banned Books Every Woman Should Read While it would be great if we were past the whole “banning books” thing, the fact remains that hundreds of books have their places in libraries or on school reading lists challenged each year. According to the American Library Association, books are most commonly challenged for being “sexually explicit” or containing “offensive language.” But some of the books that are most often challenged are also literary classics, containing storylines that almost everyone can learn from. In honor of Banned Books Week 2014, we’ve pulled together a list of controversial books that every woman should read. They cover sexual freedom and women pushing back against prescribed roles, oppression against women and people of color, and what it means to be a woman in different places and times. Above all, they are stories well told. Here are 12 banned, censored and commonly challenged books every woman (and person) should read:

FREE BOOKS: 100 Legal Sites To Download Literature Looking for the next great book to sink your teeth into? Look no further. Below are over 100 links to websites that provide free e-books on a huge variety of topics. Browse works by Mark Twain, Joseph Conrad and other famous authors here. 1. Textbooks If you don't absolutely need to pay for your textbooks, save yourself a few hundred dollars by reviewing these sites. 15. Math and Science Turn to this list to find books about math, science, engineering and technology. 25. Children's Books Even children's books are now available online. 31. byGosh: Find free illustrated children's books and stories here. 32. Philosophy and Religion For books about philosophy and religion, check out these websites. 35. Plays From Shakespeare to George Bernard Shaw to more contemporary playwrights, visit these sites. 40. Modern Fiction, Fantasy and Romance These websites boast collections of graphic novels, romance novels, fantasy books and more. 45. Foreign Language 55. History and Culture 70. Rare Books 75. 76. Mystery

An Update on Ken Wilber's Health Ken Wilber April 14th, 2013 Your rating: None Average: 5 (6 votes) Over the past few years there has been a tremendous outpouring of compassion and concern from the integral community for Ken Wilber's wellbeing. Ken is writing again! Watch this free video from the 2012 What Next Media Collection to learn what Ken is up to these days.... This clip is excerpted from the 2012 What Next Media Collection, and is part of Ken's full 2 hour 15 minute keynote address. Here you can find the full media collection for the 2012 What Next Conference. The collection includes: Get the entire collection for just $149.99 and experience the future of consciousness, culture, and creativity! Learn more Other Pieces You May Enjoy Sign up or log in to join the conversation!

Free Books : Download & Streaming : eBook and Texts : Internet Archive Additional collections of scanned books, articles, and other texts (usually organized by topic) are presented here. United States Patent and Trademark Office documents contributed by Think Computer Foundation. Topic: U.S Patent The American Libraries collection includes material contributed from across the United States. Institutions range from the Library of Congress to many local public libraries. As a whole, this collection of material brings holdings that cover many facets of American life and scholarship into the public domain. Uploads from the general users of ARCHIVE.ORG related to Islamic culture, studies and related subjects. Free books for the&nbsp; people with disabilities that impact reading. This library of books, audio, video, and other materials from and about India is curated and maintained by Public Resource. Books in this collection may be borrowed by logged in patrons. Books contributed by the Internet Archive. by Internet Archive Canada The John P. texts eye favorite 1

While Some Are Shocked by ‘Go Set a Watchman,’ Others Find Nuance in a Bigoted Atticus Finch “Whether you’ve read the novel or seen the film, there’s this image you have of Atticus as a hero, and this brings him down a peg,” said Adam Bergstein, an English teacher in Queens whose 10th- and 11-grade students read “Mockingbird.” “How do you take this guy who everybody looked up to for the last 50-plus years, and now he’s a more flawed individual?” In this version, Atticus is 72 years old, suffering from arthritis and stubbornly resistant to social change. He stands in sharp contrast to the gentle scholar in “Mockingbird,” who tells Scout, when explaining why he has gone out on a limb to defend a black man, that “I do my best to love everybody.” In “Watchman,” which comes out Tuesday, Atticus chides Scout for her idealistic views about racial equality: “The Negroes down here are still in their childhood as a people.” After the initial shock, some writers and literary critics see added value in a more complex, and flawed, version of Atticus. Photo It is unclear why Ms. Ms. While A.

Slavenka Drakulic The Idea of a Local Economy A TOTAL ECONOMY is one in which everything — “life forms,” for instance, — or the “right to pollute” is “private property” and has a price and is for sale. In a total economy significant and sometimes critical choices that once belonged to individuals or communities become the property of corporations. A total economy, operating internationally, necessarily shrinks the powers of state and national governments, not only because those governments have signed over significant powers to an international bureaucracy or because political leaders become the paid hacks of the corporations but also because political processes — and especially democratic processes — are too slow to react to unrestrained economic and technological development on a global scale. In default of government protections against the total economy of the supranational corporations, people are where they have been many times before: in danger of losing their economic security and their freedom, both at once.

Ted Ed on hero story & Joseph Campbell The Hero Archetype in Literature, Religion, and Popular Culture: (along with a useful PowerPoint presentation teachers can download at this URL: )Maricopa Center for Learning and Instruction (users embark on their own hero's journey): American Masters Lesson from PBS for Teachers on George Lucas, the Power of Myth, and the Hero's Journey: an interactive approach to the Hero's Journey: of course, information about Joseph Campbell's works on the subject, on the Joseph Campbell Foundation site:The Hero With A Thousand Faces Hero's Journey (semi-biographical film):