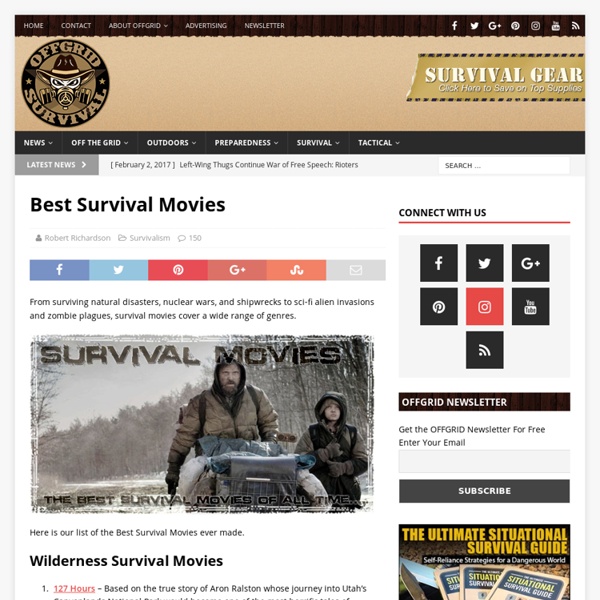 From surviving natural disasters, nuclear wars, and shipwrecks to sci-fi alien invasions and zombie plagues, survival movies cover a wide range of genres. Here is our list of the Best Survival Movies ever made. Wilderness Survival Movies 127 Hours – Based on the true story of Aron Ralston whose journey into Utah’s Canyonlands National Park would become one of the most horrific tales of endurance and courage ever told.Alive – Based on the real-life events of an Uruguayan rugby team that crash landed in the Andes. Survival by Sea / Castaway Cast Away – One man’s story of survival after crash landing near a deserted island.Shackleton – The Greatest Survival Story of All Time – Based on the real-life adventure of Sir Ernest Shackleton’s whose 1914 Antarctic expedition turned out to be one of the greatest survival stories of all time.Lost – I know it’s a T.V. series, and not technically a movie, but I couldn’t leave it off the list. Zombie Apocalypse Movies Post-Apocalyptic Movies Misc.

Why The City Might Be Your Best Bet | Personal Liberty Digest For the last 15 years or so, the common thought has been that in a disaster situation where there’s a medium to long term breakdown in infrastructure and civil order, the ONLY way to survive is to flee the city, like a dog with its tail between its legs, and hide out in the woods until things get back to normal. This is really dated thinking that ignores history. Besides the logistics of whether or not you’ve got a fully stocked rural retreat to flee to, or the fact that there’s a good chance that it will be difficult to travel with gridlock and roadblocks, there are several reasons why cities — or urban areas — make good places to stay after a disaster. We’re going to cover five of those today and another five in my next article. I need to start out by saying city people DO have additional risks that isolated rural dwellers don’t have. What do I mean by urban? Lie No. 1. Lie No. 2. Half-truth No. 3. There is another side to this story… one which has a lot more historical evidence. New

Vanishing Point: How to disappear in America without a trace Where there's water, life is possible. True, it may be very difficult and very hard to live, depending, but anyone who's driven, hiked, or camped in the American South West will have noticed that cities and ranches crop up where there's surface water or where there's been a well dug. Within the state of California, Nevada, Arizona, Utah, New Mexico, and Colorado, there are deserts, mesas, mountains, and forests where normally people never or rarely visit; not-so-secret places where there's water, access to a road within a day's hike, and where a fairly rugged individual may hide while remaining basically healthy, marginally well fed, and reasonably sane. In this section I'll look at two such environments, neither of which I would recommend, but one of which I'd suggest is a reasonable way to live in basic health while either on the run, hiding out from the law, old girl friends, the draft for an illegal war, putative wives and such. Where exactly? How I Would Do It Some Other Areas

35 must watch TV series before u die (2000 onwards) - a list by ayas_ranjan Year In Review: The 11 Best Short Films of 2011 Over the course of the year, curating the Short Film of the Day feature has given me a deep and affecting appreciation of the art form. Before, I hadn’t given much thought to the little bastards, but the truth is that they are incredibly versatile and representative of the boundaries that film can break. They can be jokes told well or human dramas driven home. They can be a perfect bite or demand to be expanded into a full meal. They can feel classic or break out into the long, strange realm of experimentation. They are so much more than movies with short runtimes. There’s one difficulty in judging them, though. The other (small) problem is that sometimes short films spend a long time touring festivals and otherwise being unavailable online. 11. In this sweetly dark comedy from writer/director Bradley Jackson features Ralph Winston (Keir O’Donnell) as a children’s party clown who has never cried in his entire life. 10. 9. 8. Absurdity lives. 7. 6. Spike Jonze.

Wilderness Survival - Survival-Tube 5 Ugly Truths Americans Will Have to Face Written By : John HawkinsMarch 2, 2010 “Before I draw nearer to that stone to which you point, answer me one question. Are these the shadows of the things that Will be, or are they shadows of the things that May be only?” ADVERTISEMENT Still the Ghost pointed downward to the grave by which it stood. Even the United States of America is not immune to the rules of nature and commerce that govern other nations. What is that going to mean in real terms? 1) Entitlements must be cut. 2) Our military is going to weaken. 3) Taxes are going up. 4) Economic growth is going to stagnate. Large budget deficits would reduce national saving, leading to more borrowing from abroad and less domestic investment, which in turn would depress economic growth in the United States. Less growth means less jobs, less prosperity, and handing future generations of Americans a country that doesn’t hold as much promise as the one that we grew up in. Are these events that “will be” or “may be?”

9 Unique Alternative Housing Ideas If you are looking for an alternative shelter for your property, there are many options available. I picked some of my favorite alternative housing options for consideration when planning a bug out home, storage unit or improvised shelter. Shipping Containers Shipping containers cost a little bit more than some of the other methods mentioned in this post, however their durability more than makes up for the cost. some amazing homes have been built out of shipping containers. More Straw Bale Building structures using straw bales can be surprisingly affordable, and a lot more comfortable that you might think. (Credit for the last picture) Pallet Home More Earth Berm Earth bag

The 50 Best Movies on Netflix Instant We love the convenience of streaming movies on Netflix Instant, but we don’t always love the navigating through the countless films in the service’s ever-expanding catalog to find something to watch. So we’ve compiled our list of recommended titles for you—whether you love classics, comedies, documentaries or just good ol’ fashioned kung-fu. The genres vary greatly here—and range in age from brand new to 87-years-old—but all 50 of these films come with the Paste stamp of approval. The list is up to date as of February 2013, but we’ll update the list from time to time as Netflix Instant changes its offerings. 15. 14. 13. 12. 11. 10. 9. 8. 7. 6. 5. 4. 3. 2. 1.

Great YouTube Channels The following links are to YouTube Channels that I have followed over the last year and have seen consistently high quality useful content come from their channels. I highly recommend that you subscribe to their channels if you are interested in learning more about survival, bushcraft, and prepping. Chernobyl Exclusion Zone The cooling tower for the never finished Reactor 5. Photo: Rory Carnegie Chernobyl Exclusion Zone Chernobyl Exclusion Zone Pripyat Amusement Park Pripyat Amusement Park, which was set to open when the accident occurred Chernobyl Farm Couple A farm couple at home, five miles from the reactor Chernobyl Biotechnician A biotechnician and his lab partner THE WILD BOAR IS STANDING 30 OR 40 yards away, at the bottom of a grassy bank, staring right at me. I climb back into our VW van, tingling all over. But luck isn't our only obstacle to wildlife spotting here. At the Chernobyl Center, a kind of make­shift reception building in the heart of the old town, I had to hand over a solid nine inches of local bills—hryvnia, pronounced approximately like the sound of a cardsharp riffling a deck—sign a stack of agreements, compliances, and receipts, and then get checked on an Austin Powers–style Geiger counter made out of chrome. Thirty people died on the night of the explosion or soon after. "Why locked?"