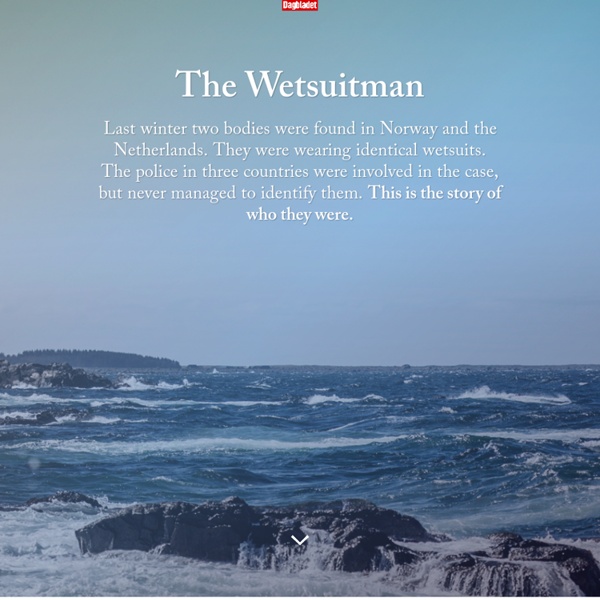 A gale was blowing from the south-west as the elderly architect put on his jacket and rubber boots and went to face the elements. Down in the bay, four metre high waves crashed against the cliffs and sent sea spray hundreds of metres across the grazing land at Norway’s southernmost tip. The first thing the architect noticed when he approached the sea was a wetsuit. It lay stretched out on the small patch of grass between the cliffs, right outside the reach of the waves. “That might be useful,” the architect thought. It was rare for him or anyone else in the village to take a walk down there. He could smell seaweed and the sea and a faint, sickly scent of something else. The wetsuit was the Triboard brand. Sherriff Kåre Unnhammer from Farsund police station is an authoritative figure with large serious eyes, a big moustache and gold teeth that gleam when he speaks. “This is a peaceful place,” says Unnhammer. He turns to his computer and reads from the log. John Welzenbagh knew this. “No.

Stars in My Pocket Like Bits of Data by Paul Stephens The poetics of information overload. Eric Hu, Drone. © Eric Hu. Everybody gets so much information all day long that they lose their common sense. —Gertrude Stein Instant Comfort - today's art therapy project In my art therapy group today I brought in small match boxes - easy to carry in your pocket. The idea is to have something to remind you of good self talk when your most troublesome emotion is bothering you. The outside of the box tells what bothers you. Inside are words and phrases you can say to yourself for comfort.

"On Truth and Lies in a Non-moral Sense" / F. Nietzsche Friedrich Nietzsche On Truth and Lies in a Nonmoral Sense Once upon a time, in some out of the way corner of that universe which is dispersed into numberless twinkling solar systems, there was a star upon which clever beasts invented knowing. That was the most arrogant and mendacious minute of "world history," but nevertheless, it was only a minute. After nature had drawn a few breaths, the star cooled and congealed, and the clever beasts had to die. _One might invent such a fable, and yet he still would not have adequately illustrated how miserable, how shadowy and transient, how aimless and arbitrary the human intellect looks within nature.

Sculpture by lifetime sailor & artist Frances Bruno Catalano Located in Marseille, France – Frances says “‘I have travelled a lot and I left Morocco when I was 12 years old. I felt that a part of me was gone and will never come back. ‘From years of being a sailor, I was always leaving different countries and places each time and it’s a process that we all go through.” Or just how I feel on a Monday morning. Joseph Palmer: Perscuted For Wearing The Beard Recently, I made a special trip up to Evergreen Cemetery in Leominster, Massachusetts to see the grave of Joseph Palmer, a veteran of the War of 1812 and a member of the short-lived Utopian community “the Fruitlands”. I’m not much of a history buff, so why would I drive halfway across the state to seek out the grave of a man who died a century before I was born? It was too interesting of a story not to investigate.

A Dispatch from a Syrian Refugee Camp By Lionel Beehner A few quick and random thoughts on my recent trip interviewing refugees along the Syrian-Jordanian border and in the notorious Za’atari camp. Za’atari Refugee Camp, JORDAN: Many girls in Za’atari do not attend schools, live in female-headed households, and are married off early. Stop Bullshitting Yourself If You Want To Wake Up (From The True Matrix) I’m trying to free your mind Neo. But I can only show you the door. You’re the one who has to walk through it.— Morpheus, The MatrixTweet This I have it all, but I feel a void…

Edutopia Empower our refugee children with storytelling Wearable technology is incredibly exciting for educators and students of all ages. In the past few years, mobile devices have found an essential place in the classroom. If you've used smartphones and tablets as instructional tools, you know how powerful these devices can be in the hands of students. Will this also be true for wearable technology?

The Scalp Industry Although the origins of the practice of scalping may be lost in the nebulous hinterlands of the past, the industry of scalp hunting has a specific and documented history. Although some of the particulars may be shrouded in rumors, the scalp bounty laws instituted a peculiar economic venture between the Mexican government and, primarily, American citizens. Between 1835 and the 1880s, the Mexican authorities paid private armies to hunt Native Americans, paying per kill and using scalps as receipts. The practice began when the Mexican government could no longer provide adequate protection to its citizens from the marauding Apaches and Comanches. The natives rode down from the U.S. killing peons, kidnapping women, and stealing livestock and then would escape back over the border. Bounty Laws

Empowering Students Through Multimedia Storytelling Perceptions of people and events are very much dependent upon who you are and what your experience has been. Events in Ferguson and Baltimore, among others, highlight our misunderstandings of each other, and how the same facts can be interpreted entirely differently. What's worse, people of color and underrepresented groups are defined by journalists covering these events, who themselves don't reflect the ethnic composition of our country as a whole. Recent studies have proven that stories can change perceptions and even make people more tolerant. Rather than wait to be defined by others, it's important that students learn to create understanding by sharing their story, their worldview, their concerns, and their triumphs with others. Groups like Youth Radio and Cause Beautiful are empowering teens in poor and minority-majority neighborhoods to become multimedia journalists.