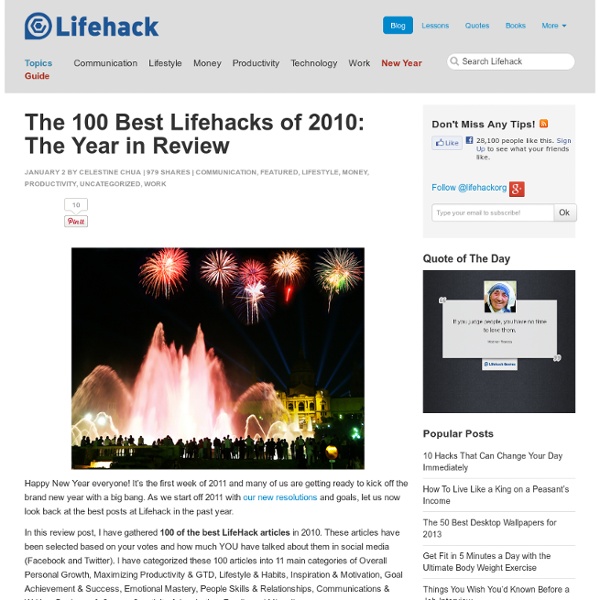 Happy New Year everyone! It’s the first week of 2011 and many of us are getting ready to kick off the brand new year with a big bang. As we start off 2011 with our new resolutions and goals, let us now look back at the best posts at Lifehack in the past year. In this review post, I have gathered 100 of the best LifeHack articles in 2010. These articles have been selected based on your votes and how much YOU have talked about them in social media (Facebook and Twitter). I have categorized these 100 articles into 11 main categories of Overall Personal Growth, Maximizing Productivity & GTD, Lifestyle & Habits, Inspiration & Motivation, Goal Achievement & Success, Emotional Mastery, People Skills & Relationships, Communications & Writing, Business & Career, Creativity & Inspiration, Family and Miscellaneous. Do not attempt to read this whole post at once! Let me start off with the top 10 most popular life hack posts out of the 100s of posts published in 2010. Overall Personal Growth Family

The 100 Best Lifehacks of 2011: The Year in Review Another year is coming to a close this weekend, and it’s been a banner one here at Lifehack. As you’ll see below, one of our most popular posts of 2011 was our 100 Best Lifehacks of 2010 article, which flows nicely into this post which will outline the 100 Best Lifehack of 2011. Unlike last year’s list, there’s a few changes we put into place before delivering this list to our readers. First off, the overall top 10 posts are determined by overall traffic during the past year, as well as engagement on social networks. The articles come from a wide variety of our website’s categories, whereas the remaining 90 articles are divided up into the primary categories that we write about at Lifehack: Communication, Lifestyle, Management, Money, Productivity and Technology.

The 90 Best Lifehacks of 2009: The Year in Review Another year is winding down, and that means it’s time to take a look back at what we’ve done here at Lifehack over the last 12 months. 2009 was a scary year for a lot of people – corporate layoffs, a shaky global economy, stunningly vicious politics, old wars grinding on and new ones flaring up. In the midst of all this, though, many saw opportunities; with the myth of life-long corporate employment shattered as some of the world’s biggest companies teetered on the brink of collapse, entrepreneurship enjoyed a major resurgence. This rise in self-reliance extends beyond our work life, too – people are embracing a do-it-yourself, person-to-person lifestyle where status and the display of wealth matter much less than authenticity and social interaction. All of this is reflected in the posts that went up on this site over the last year. What emerges from all this is a treasure trove of good advice, ranging from the lofty and idealistic to the immediately practical.

29 Semi-Productive Things I Do Online When I’m Trying to Avoid R You don’t always have to work hard to be productive. Productivity can simply be the side effect of doing the right things. So here’s a list of 29 semi-productive things I do online when my mind is set on avoiding ‘real work.’ Check delicious popular tags like ‘useful,’ ‘tutorials,’ ‘tips,’ ‘howto,’ ‘advice,’ ‘entrepreneurship,’ etc. for interesting, educational articles to read.Watch one of the thousands of educational videos streaming at TED.com, Academic Earth and Teacher Tube.Read an online book list and find a new book to grab next time I’m at the library. Here’s another list.

7 Not So Obvious Habits To Maximize Your Productivity - StumbleUpon I was a big fan of productivity, and, in some respects, I still am. I’ve been a very early adopter of GTD, and, for years, I did my weekly reviews with the discipline of a zen monk. But, eventually, I hit a roadblock. Start Every Day as a Producer, Not a Consumer I have to agree that my most productive days are those where I don't allow myself to read the news, check e-mail, facebook, etc., right after I get up. However, that happens because I've got a ton of stuff to get done, and the outside world takes a back seat until my workload is under control. However, there are certain biological necessities that have to happen before I can be productive.

Einstein for Everyone Einstein for Everyone Nullarbor Press 2007revisions 2008, 2010, 2011, 2012, 2013 Copyright 2007, 2008, 2010, 2011, 2012, 2013 John D. Norton Published by Nullarbor Press, 500 Fifth Avenue, Pittsburgh, Pennsylvania 15260 with offices in Liberty Ave., Pittsburgh, Pennsylvania, 15222 13 Strategies To Jumpstart Your Productivity Looking to increase your productivity? You’ve come to the right article. I don’t claim to be a productivity master (I always think there’s room for improvement), but I am very passionate about increasing productivity. I’m always looking for different ways to be more productive – stealing pockets of time where I can, deprioritizing the unimportant, getting system overhauls, etc. And I love it when I see my efforts pay off in the form of increased outputs at the end of the day. In this article, I have selected 13 of my best productivity strategies – tried, tested and validated.