Margaret Heffernan: Why it's time to forget the pecking order at work 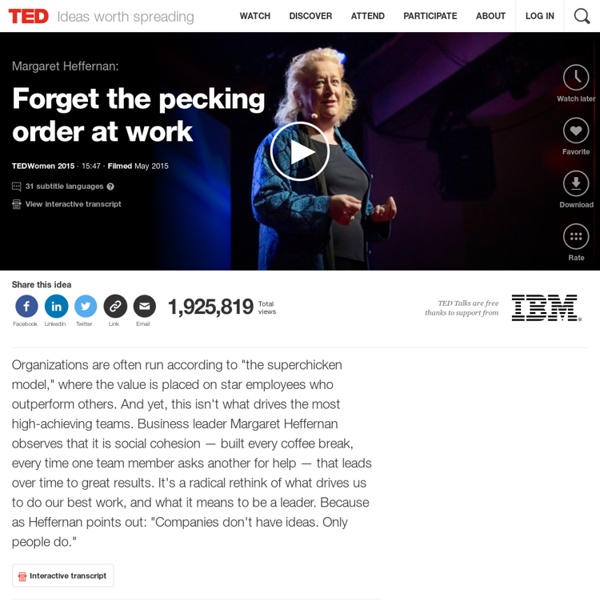 What motivates us at work? More than money “When we think about how people work, the naïve intuition we have is that people are like rats in a maze,” says behavioral economist Dan Ariely (TED Talk: What makes us feel good about our work?) “We really have this incredibly simplistic view of why people work and what the labor market looks like.” Instead, when you look carefully at the way people work, he says, you find out there’s a lot more at play — and at stake — than money. Ariely provides evidence that we are also driven by the meaningfulness of our work, by others’ acknowledgement — and by the amount of effort we’ve put in: the harder the task is, the prouder we are.

Hexagons! And other reasons to get excited about math Eduardo Sáenz de Cabezón suspects that when people ask him what’s the use of math, they’re really asking a more pointed question. “They’re asking you, ‘Why did I have to study that bullshit I never used in my life again?’” he says. Sáenz de Cabezón (TED Talk: Math is forever) sympathizes, but as a mathematics professor at the University of La Rioja in northeastern Spain, he has come up with a spirited defense of his chosen profession. Math, he believes, is nothing less than a quest for eternal truth. Corporate Training Video Production If I can watch it, why read? There is a video on the Internet for learning almost any skill, in most languages of the world. With user preferences clearly towards “on the go” videos, organizations are moving quickly to migrate and develop their training content to use this new medium and reach out to all their employees, even in remote locations.

Teamwork as Helping - Suzanne Gordon I’ve been writing about teamwork for years but constantly learn more about what it means to be a team leader and member every day. A couple of months ago, I had an epiphany about what it really means to work on a team with someone else. Could be just one person. How a great conversation is like a game of catch Barry Lee When you play catch, you have to do an equal number of catches and throws, right? It’s not possible to play catch with somebody and throw more than you catch, for the most part. Because then you’d just be throwing baseballs at them, which is not nice.

Half of Employees Don’t Feel Respected by Their Bosses When it comes to garnering commitment and engagement from employees, there is one thing that leaders need to demonstrate: Respect. That’s what we saw in a study of nearly 20,000 employees around the world (conducted with HBR and Tony Schwartz). In fact, no other leader behavior had a bigger effect on employees across the outcomes we measured. Being treated with respect was more important to employees than recognition and appreciation, communicating an inspiring vision, providing useful feedback — even opportunities for learning, growth, and development. Those that get respect from their leaders reported 56% better health and well-being, 1.72 times more trust and safety, 89% greater enjoyment and satisfaction with their jobs, 92% greater focus and prioritization, and 1.26 times more meaning and significance. Those that feel respected by their leaders were also 1.1 times more likely to stay with their organizations than those that didn’t.

8 practical ways to help refugees Melissa Fleming of the UN’s Refugee Agency shares some ways to help refugees right now. When half a million refugees showed up in Europe earlier this year, the world began to take notice of a problem that has been steadily growing before our eyes. Ten years ago, 38 million people had been driven from their homes because of war or persecution; right now that number stands at 60 million. That’s equivalent to the population of Italy … drifting, stranded, with little hope of returning home, and few chances to thrive in neighboring countries. In Europe, the lack of a unified system to manage the influx of refugees and migrants is exacerbating the problem. Change Management Strategy: Use Social Media If constant change is the new normal, what then is the strategy that you can adopt to cope within a world of rapid change? The answer is Change Management. Change Management is a structured approach to change that not only updates systems but prepares and retrains employees with the goal of reaching a higher level of efficiency and success. Adapting to remain relevant and competitive in a dynamic global market is inevitable. In today’s fast-paced world, effective Change Management increases the success of organizational change and project initiatives by applying a structured framework of methods, tools and processes, managing the change from a current state to a future state. Regardless of the scale of change, applying a framework increases the probability of staying on schedule and budget, resulting in higher benefit realization and ROI.