What's Wrong with Cultural Appropriation? These 9 Answers Reveal Its Harm 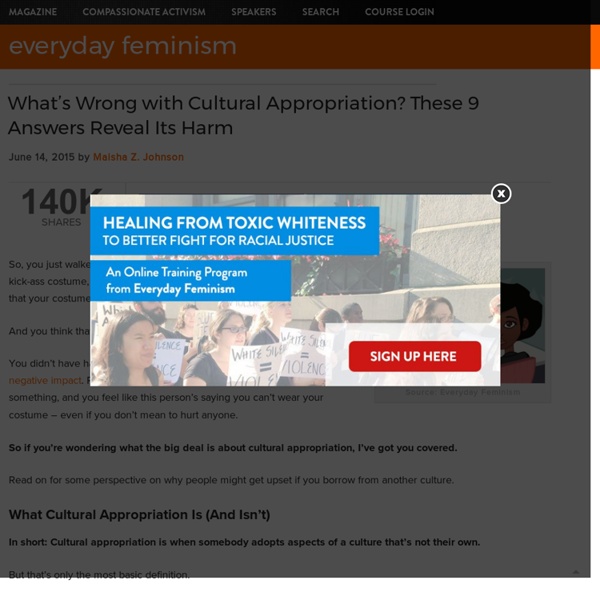 So, you just walked into a Halloween party. You think you’re wearing a kick-ass costume, but instead of giving you a compliment, someone tells you that your costume counts as cultural appropriation. And you think that’s a ridiculous accusation. You? Doing something racist? You didn’t have hateful intentions, so you don’t know how you could have a negative impact. So if you’re wondering what the big deal is about cultural appropriation, I’ve got you covered. Read on for some perspective on why people might get upset if you borrow from another culture. What Cultural Appropriation Is (And Isn’t) In short: Cultural appropriation is when somebody adopts aspects of a culture that’s not their own. But that’s only the most basic definition. A deeper understanding of cultural appropriation also refers to a particular power dynamic in which members of a dominant culture take elements from a culture of people who have been systematically oppressed by that dominant group. In other words, context matters.

Japanese Designer Just Demonstrated How Not to Borrow From Another Culture Yet another racially tinged fashion controversy is brewing, this time over on the Paris runways, where one Japanese designer staged an African-themed fashion show ... with no models who appeared to be of African descent. On Friday, designer Junya Watanabe presented a menswear show with models draped in beads, bones, masks and other tribal accoutrements. The African-inspired pièce de résistance: headpieces piled high with braided, twisted hair. And none of the models appeared to be black. The disconnect prompted immediate outrage Twitter, including tweets that cleverly highlighted the appropriated hairpieces with Rachel Dolezal comparisons:

New Species Of Human Discovered In South Africa Brace yourself: this discovery is huge. So huge that its profound implications will shake up our very own family tree. The University of Witwatersrand, in collaboration with National Geographic, is proud to announce a remarkable story of human heritage. 14 Things People Probably Do Not Want To Know About Their Favorite Foods There are hundreds of food industry facts that are sheltered from consumers and only made public by food scientists if absolutely necessary. The following are 14 of the more well known industry insider secrets that have been exposed now for some time, but still not common knowledge to millions of consumers. Many consumer watchdogs have found that food label claims such as ‘pure’, ‘fresh’, ‘non-artificial’, ‘natural’ and ‘real’ are largely unregulated and false when these claims are investigated.

Slip On These "Whiteness Goggles" and the Violence of Cultural Appropriation Disappears A new series of prints by artist Roger Peet aims to address a tricky topic: cultural appropriation. In his series In//Appropriate, which debuted at the Portland State University Littman Gallery this month, Peet printed images of white people engaging in cultural appropriation on tall banners. Frozen in time, Miley Cyrus joyfully twerks with her tongue in its signature position, a hipster wears a keffiyeh, and Katy Perry smiles in her American Music Awards geisha costume. Behind them, another vision of whiteness—a violent one—is printed in red: Miley stands out against a scene of police in Ferguson, a bohemian white girl in a feathered headdress is juxtaposed with an iconic photo of a mountain of buffalo skulls, and a still from Iggy Azalea's "Bounce" video frames a portrait of colonizing Queen Victoria. To accompany the images, Peet constructed special glasses made from cardboard and red plastic. These are “whiteness goggles,” a sign explains.

Appropriation is the intentional borrowing, copying, and alteration of preexisting images and objects. It is a strategy that has been used by artists for millennia, but took on new significance in mid-20th-century America and Britain with the rise of consumerism and the proliferation of popular images through mass media outlets from magazines to television. Roy Lichtenstein. Drowning Girl. 1963 Andy Warhol.

Pixar In A Box Teaches Math Through Real Animation Challenges Pixar senior scientist Tony DeRose was faced with a problem that animators had never solved — how to make the hand of an old man look lifelike. It was 1998 and he was working on the experimental short film “Geri’s Game.” DeRose needed to figure out how to make a sculpture hand model with many angular planes look smooth and skin-like on the screen. To do this he developed an algorithm using weighted averages that won him a Scientific and Technical Academy Award in 2006. Pixar is constantly solving new technical challenges that allow its artists, designers and storytellers a broader range of movement and texture in the movies they make. Now the company is teaming up with Khan Academy to use examples like DeRose’s discovery of surface representation to show students how the math and science they’re learning in school is applied by Pixar animators.

7 Secrets of Super Performers (Improving Your Performance Skills) Photo by Don LaVange Some students seem like natural performers. They know how to “work a crowd,” they dance with energy, and seem to move with joy. Certainly, experience as a performer plays a big part in this. Like anything else, practice in performance allows you to learn what works and what doesn’t. “Natural” performers, however, seem to know something that others do not.

Curriculum for White Americans to Educate Themselves on Race and Racism–from Ferguson to Charleston When teaching about race and racism, I invite participants to consider the following analogy: Think of racism as a gigantic societal-sized boot. “Which groups do you think are fighting the hardest against this boot of racism?” I ask them. Invariably, participants of diverse races answer that those fighting hardest to avoid getting squashed by the boot are people of Color. (Keep in mind that I don’t ask this question on day one of our study of race.

Cultural Appreciation or Cultural Appropriation? A text on culture, respect, allyship, and racism What is cultural appropriation? Cultural appropriation is the adoption or theft of icons, rituals, aesthetic standards, and behavior from one culture or subculture by another. It generally is applied when the subject culture is a minority culture or somehow subordinate in social, political, economic, or military status to the appropriating culture. This “appropriation” often occurs without any real understanding of why the original culture took part in these activities or the meanings behind these activities, often converting culturally significant artifacts, practices, and beliefs into “meaningless” pop-culture or giving them a significance that is completely different/less nuanced than they would originally have had.

Black America, please stop appropriating African clothing and tribal marks. — THOSE PEOPLE — Medium For the life of me, I need to know: Can Black people culturally appropriate one other? It’s a nuanced question that seems to either set tempers aflare or create vacuums of silence in a room but, after going through pictures taken at the latest Afropunk Festival, it’s definitely one that I have to ask. And if Blacks can, why is the disgust and uproar surrounding this ongoing phenomenon only reserved for instances when White people appropriate us? I ask this because Black Twitter is littered with countless examples of the uproar that ensues when White people appropriate Black culture. Words such as fancy dress, mockery and profiteering are thrown around quite freely, but no one seems to realize that this selfsame violation is committed against us Africans — all under the guise of tribal fashion and connecting to The Motherland.

Yoga Sutra When our children were young, their father and I would occasionally summon up the courage to take them out for dinner. Before entering the restaurant, one of us would remind them to “be good” or we would leave. This warning was only mildly successful, but then one day their father reasoned out a more effective approach. On our next outing we stopped outside the restaurant and reminded them specifically to “stay in your chair, don’t throw food, and don’t yell. If you do any of these things, one of us will take you out of the restaurant at once.”

I, Racist A couple weeks ago, I was debating what I was going to talk about in this sermon. I told Pastor Kelly Ryan I had great reservations talking about the one topic that I think about every single day. Then, a terrorist massacred nine innocent people in a church that I went to, in a city that I still think of as home. At that point, I knew that despite any misgivings, I needed to talk about race. Cultural Appropriation: The Act of Stealing and Corrupting A person’s cultural identity forms one of the most important and most vulnerable parts of who they are. We tend to define ourselves by what we believe, and the way we express our beliefs is through certain symbols that are generally representative of our culture. With culture comes a sense of identity, a sense of self, and when our culture is stolen from us, there is this deep sense of loss.