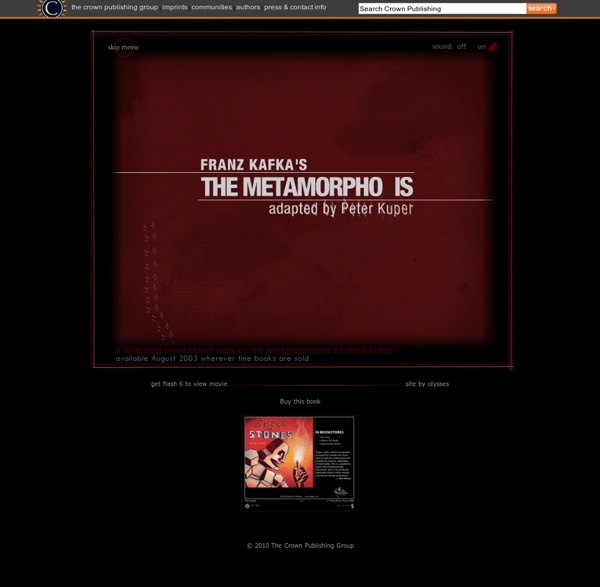 The Walrus & The Carpenter (from Through the Looking-Glass and What Alice Found There, 1872) The sun was shining on the sea, Shining with all his might: He did his very best to make The billows smooth and bright-- And this was odd, because it was The middle of the night. The moon was shining sulkily, Because she thought the sun Had got no business to be there After the day was done-- "It's very rude of him," she said, "To come and spoil the fun!" The sea was wet as wet could be, The sands were dry as dry. You could not see a cloud, because No cloud was in the sky: No birds were flying overhead-- There were no birds to fly.

Brave New World by Aldous Huxley Chapter One A SQUAT grey building of only thirty-four stories. Over the main entrance the words, CENTRAL LONDON HATCHERY AND CONDITIONING CENTRE, and, in a shield, the World State's motto, COMMUNITY, IDENTITY, STABILITY. The enormous room on the ground floor faced towards the north. Cold for all the summer beyond the panes, for all the tropical heat of the room itself, a harsh thin light glared through the windows, hungrily seeking some draped lay figure, some pallid shape of academic goose-flesh, but finding only the glass and nickel and bleakly shining porcelain of a laboratory.

Some Things You Can't Force There is a place off the Alaskan coast where two seas of different densities collide. From an aerial view, a great expanse of black water, velvet-surfaced water, advances like an army to meet its rippling grey-green neighbor. They crash against each other in a divide of frothy white, water against water, both relentlessly trying to invade the other but unable. They are Different Waters. You are a sea and I am a sea. Beside me, I see the body of your water and throw my own against yours. Welcome to Adobe GoLive 6 - StumbleUpon From Los Angeles Times: It's not all about you Chances are, others aren't judging you as harshly as you think, if at all. By Benedict Carey Times Staff Writer

mental_floss Blog & 6 Wordsmiths Who Couldn&t Spell This month marks my 6-year anniversary blogging for mental_floss. It also marks mentalfloss.com's 6-year anniversary in the blogosphere. To celebrate the more than 2,000 daily posts, I'll be republishing some of my favorite posts from these last half-dozen years, starting today, running to the end of the month. Hope you enjoy this stroll down memory lane... Inferno by Dante Alighieri Average Rating: 5.0 out of 5 based on 3 ratings 13 Favorites on Read Print Read online Write a review Add to favorites Add to bookshelf Book Description The Divine Comedy (Hell) describes Dante Alighieri 's journey through Hell (Inferno), guided first by the Roman epic poet Virgil and then by Beatrice. Dante called the poem "Comedy" because poems in the ancient world were classified as High ("Tragedy") or Low ("Comedy").

14 Ways to Acquire Knowledge: A Timeless Guide from 1936 Consider the knowledge you already have — the things you really know you can do. They are the things you have done over and over; practiced them so often that they became second nature. Every normal person knows how to walk and talk. But he could never have acquired this knowledge without practice. 50 Most Influential Books of the Last 50 (or so) Years - StumbleUpon In compiling the books on this list, the editors at SuperScholar have tried to provide a window into the culture of the last 50 years. Ideally, if you read every book on this list, you will know how we got to where we are today. Not all the books on this list are “great.” - StumbleUpon [Editor's note: While your Flavorwire editors take a much-needed holiday break, we're revisiting some of our most popular features of the year. This post was originally published June 19, 2011.] Sigh. Authors just don’t insult each other like they used to. Sure, Martin Amis raised some eyebrows when he claimed he would need brain damage to write children’s books, and recent Pulitzer Prize winner Jennifer Egan made waves when she disparaged the work that someone had plagiarized, but those kinds of accidental, lukewarm zingers are nothing when compared to the sick burns of yore. It stands to reason, of course, that writers would be able to come up with some of the best insults around, given their natural affinity for a certain turn of phrase and all.

Do not stand at my grave and weep Do Not Stand at My Grave and Weep is a poem written in 1932 by Mary Elizabeth Frye. Although the origin of the poem was disputed until later in her life, Mary Frye's authorship was confirmed in 1998 after research by Abigail Van Buren, a newspaper columnist.[1] Full text[edit] Do not stand at my grave and weep, Top 100 Fiction A contemporary list, with an international flavour and a respect for the classics, The Best Books: Top 100 Novels of All Time list contains many of the great works of fiction you'd expect, but with a few surprises to add a little spice to the collection. Which books would you omit and which would you add to our list? Please let us know in the comments section below.