WorldNetDaily – A Free Press for a Free People 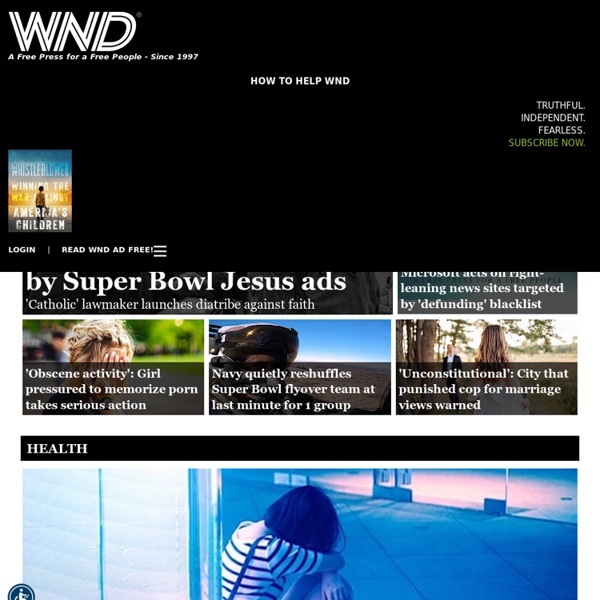 Kudlow’s Money Politics Following is the video and transcript of my Tuesday night interview with Wisconsin governor Scott Walker. In addition to discussing Walker’s new book, Unintimidated, and his heroic stand against the unions in Wisconsin, we talk Obamacare, Obama’s polls, and prospects for the 2016 presidential race: LARRY KUDLOW: We’re honored to be joined now by Wisconsin governor Scott Walker. He’s out with a new book, Unintimidated: A Governor’s Story and a Nation’s Challenge. GOV. And I think that’s part of the problem is, they made a promise that nobody could actually deliver on– not just in terms of a website but on the overall policy of ObamaCare, which is an abysmal failure. LARRY KUDLOW: Right. GOV. LARRY KUDLOW: And I think people– and — I think people are just as angry at his falsehoods– GOV. LARRY KUDLOW: –as they are at the breakdown of ObamaCare. GOV.

Thomas Sowell Thomas Sowell was born in North Carolina and grew up in Harlem. As with many others in his neighborhood, Thomas Sowell left home early and did not finish high school. The next few years were difficult ones, but eventually he joined the Marine Corps and became a photographer in the Korean War. After leaving the service, Thomas Sowell entered Harvard University, worked a part-time job as a photographer and studied the science that would become his passion and profession: economics. After graduating magna cum laude from Harvard University (1958), Thomas Sowell went on to receive his master's in economics from Columbia University (1959) and a doctorate in economics from the University of Chicago (1968). In the early '60s, Sowell held jobs as an economist with the Department of Labor and AT&T. Thomas Sowell has published a large volume of writing. In 1990, he won the prestigious Francis Boyer Award, presented by The American Enterprise Institute. ... show less

Walter E. Williams Born in Philadelphia in 1936, Walter E. Williams holds a bachelor's degree in economics from California State University (1965) and a master's degree (1967) and doctorate (1972) in economics from the University of California at Los Angeles. In 1980, he joined the faculty of George Mason University in Fairfax, Va., and is currently the John M. Olin Distinguished Professor of Economics. He has also served on the faculties of Los Angeles City College (1967-69), California State University (1967-1971) and Temple University (1973-1980). More than 50 of his publications have appeared in scholarly journals such as Economic Inquiry, American Economic Review and Social Science Quarterly and popular publications such as Reader's Digest, The Wall Street Journal and Newsweek. He is also the author of 'Race and Economics: How Much Can Be Blamed on Discrimination?' In 1981, he began writing his weekly column called "A Minority View" for Heritage Features Syndicate. ... show less

Welcome to AnnCoulter.com Memo to Republicans: It’s Big Government, Stupid! - Michael Tanner Riding a record of unprecedented government spending, rising debt, a government takeover of the health-care system, high unemployment, and proposals to tax everything they stumble across, Democrats have put themselves in position for an epic electoral defeat that will rival the Republican debacles of 2006 and 2008. Given this record of Democratic ineptitude and the voters’ reaction to it, one would think that Republicans would be talking about these issues every day. Instead, Republicans and conservatives have spent recent weeks talking about such distracting side-issues as immigration, the 14th amendment, gay marriage, and when and where mosques should be built. No doubt these are important issues to various constituencies. Today, the Republican base is fired up, and Democrats are dispirited. It was suburbanites, independents, and others who were fed up with the Republican drift toward big government who stayed home — or, worse, voted Democratic in 2008.

Fixing Social Security - Michael Tanner So, President Obama believes that Republican leaders are “pushing to make privatizing Social Security a key part of their legislative agenda if they win a majority in Congress this fall.” To which one responds, “If only!” There is no doubt that Social Security desperately needs reform. Social Security is already running a temporary deficit, and that deficit will turn permanent in just five years. In theory, the Social Security Trust Fund will pay benefits until 2037. That’s not much comfort to today’s 35-year-olds, who will face a 27 percent cut in benefits unless the program is reformed before they retire. Even if Congress can find a way to redeem the bonds, the trust-fund surplus will be completely exhausted by 2037. Moreover, Social Security taxes are already so high, relative to benefits, that Social Security has simply become a bad deal for younger workers, providing a below-market rate of return. Benefits are not inheritable, and the program is a barrier to wealth accumulation.

Obama's Sea of Red | Michael D. Tanner In the days and weeks leading up to the release of his budget, President Obama and his spokesmen warned us that it would contain “tough choices” and “painful cuts.” Having increased government spending by 21.4 percent during his first two years in office, Obama would now be intent on imposing “fiscal discipline.” Hah! By the administration’s own estimates, Obama’s $3.7 trillion budget would raise this year’s budget deficit to $1.65 trillion, the largest pool of red ink since the end of World War II. Overall, it’ll add nearly $13 trillion to the national debt over the next decade. “Republicans, no less than the president, have refused to get serious about entitlement reform.” That’s without counting the unfunded liabilities of such entitlement programs as Medicare and Social Security. Yes, that’s trillion with a “T.” All this red ink comes despite the fact that the president would hike taxes by $1.6 trillion over 10 years, including a nearly $1 trillion income-tax increase.