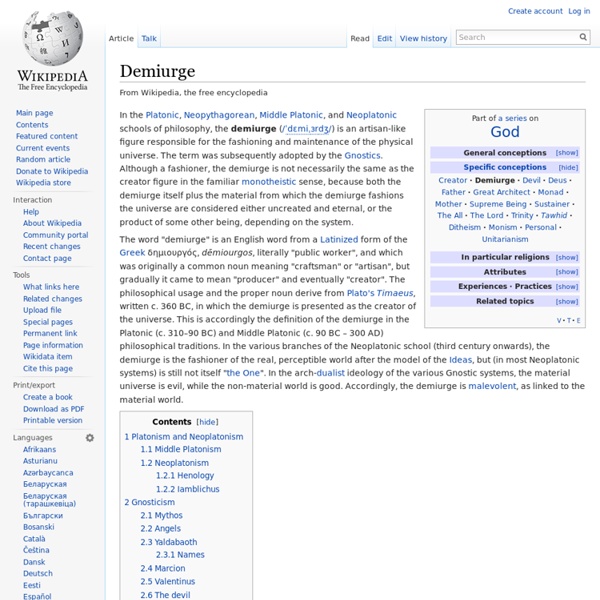 In the Platonic, Neopythagorean, Middle Platonic, and Neoplatonic schools of philosophy, the demiurge (/ˈdɛmiˌɜrdʒ/) is an artisan-like figure responsible for the fashioning and maintenance of the physical universe. The term was subsequently adopted by the Gnostics. Although a fashioner, the demiurge is not necessarily the same as the creator figure in the familiar monotheistic sense, because both the demiurge itself plus the material from which the demiurge fashions the universe are considered either uncreated and eternal, or the product of some other being, depending on the system. Platonism and Neoplatonism[edit] Middle Platonism[edit] In Numenius's Neo-Pythagorean and Middle Platonist cosmogony, the Demiurge is second God as the nous or thought of intelligibles and sensibles.[4] Neoplatonism[edit] Henology[edit] The Demiurge of Neoplatonism is the Nous (mind of God), and is one of the three ordering principles: Arche (Gr. Iamblichus[edit] Gnosticism[edit] Mythos[edit] Angels[edit] Names[edit] Related:  Creation • Gnosticismo • The Sorrow of Young Werther by Goethe

The New Gnosticism One of the advantages of living in a city whose airport is a major transportation hub is that there’s a good chance, when on the way to a conference, one will run into others going to the same place. Last time I set out for the Louisville Conference on Literature and Culture Since 1900, I ran across Rae Armantrout in the departure lounge. This year I was nearly knocked over by Patrick Pritchett, the chair of my panel, whose route to Louisville from Harvard took him through O’Hare Airport. Much of what I love about conferences takes place outside the official venues, and, indeed, on my first day I didn’t attend a single panel, but shuffled from bar to restaurant to bar, hanging with the usual suspects (Pritchett & Scroggins, conference organizer Alan Golding, Joe Donahue, David Need, Norman Finkelstein, Barrett Watten, Aldon Nielson, Vincent Sherry), and many more, including Ed Foster and Joan Retallack, neither of whom I’ve seen in Louisville before. 1.

Martin Heidegger Martin Heidegger (German: [ˈmaɐ̯tiːn ˈhaɪdɛɡɐ]; 26 September 1889 – 26 May 1976) was a German philosopher, widely seen as a seminal thinker in the Continental tradition, particularly within the fields of existential phenomenology and philosophical hermeneutics. From his beginnings as a Catholic academic, he developed a groundbreaking and widely influential philosophy. His relationship with Nazism has been a controversial and widely debated subject. For Heidegger, the things in lived experience always have more to them than what we can see; accordingly, the true nature of being is “withdrawal”. The interplay between the obscured reality of things and their appearance in what he calls the “clearing” is Heidegger's main theme. The presence of things for us is not their being, but merely their being interpreted as equipment according to a particular system of meaning and purpose. It has been suggested[by whom?] Biography[edit] Early years[edit] Marburg[edit] Freiburg[edit] Post-war[edit]

Robert Todd Carroll - Wikipedia Robert Todd Carroll (May 18, 1945 – August 25, 2016) was an American writer and academic. Carroll is best known for his contributions in the field of skepticism; he achieved notability by publishing The Skeptic's Dictionary online in 1994. He was elected a fellow of the Committee for Skeptical Inquiry in 2010.[1][2] He described himself as a naturalist, an atheist, a materialist, a metaphysical libertarian, and a positivist.[3] His published books include Becoming a Critical Thinker;[4] The Skeptic's Dictionary;[5] The Skeptic's Dictionary for Kids;[6] The Critical Thinker's Dictionary;[7] Unnatural Acts: Critical Thinking, Skepticism, and Science Exposed! He was a professor of philosophy at Sacramento City College from 1977 until his retirement in 2007.[1] Early life[edit] Carroll was born in Joliet, Illinois on May 18, 1945.[10] His father worked in a coal processing plant. Career[edit] Professor[edit] Writer[edit] Skeptic[edit] Carroll spoke in several skeptical conferences. Criticism[edit]

1. Our Origins – Videos and Articles by Wes Penre and Ariel Glad This is the story of the origins of humankind. Our souls originate and were born in Orion, and the Queen of the Stars is our Spiritual Mother. She started the Human Experiment in our solar system on a planet called Tiamaat (Maldek by some). This planet no longer exists, but the remnants are what we now know as the asteroid belt. Many Creator Gods from different star systems helped in the process of creating the Experiment. Link to the DESCRIPTION BOX Support us on Patreon or on PayPal! Like this: Like Loading... Related FAQ: Wheels within Wheels and Fate vs. By Wes Penre, Feb. 25, 2020 Wheels of Time In our video section, we have a video termed, "wheels within wheels," which is an old, esoteric term, used in secret societies and built on occult knowledge the Elite possesses. February 25, 2020 In "FAQ" Article #2: The Death Trap and How to Avoid It

Theory of forms Philosophical theory attributed to Plato The theory of Forms or theory of Ideas[1][2][3] is a philosophical theory, concept, or world-view, attributed to Plato, that the physical world is not as real or true as timeless, absolute, unchangeable ideas.[4] According to this theory, ideas in this sense, often capitalized and translated as "Ideas" or "Forms",[5] are the non-physical essences of all things, of which objects and matter in the physical world are merely imitations. Plato speaks of these entities only through the characters (primarily Socrates) of his dialogues who sometimes suggests that these Forms are the only objects of study that can provide knowledge.[6] The theory itself is contested from within Plato's dialogues, and it is a general point of controversy in philosophy. Nonetheless, the theory is considered to be a classical solution to the problem of universals. Forms[edit] Plato explains how we are always many steps away from the idea or Form. Etymology[edit] Meno Phaedo

Frank J. Tipler Frank Jennings Tipler (born February 1, 1947) is a mathematical physicist and cosmologist, holding a joint appointment in the Departments of Mathematics and Physics at Tulane University.[2] Tipler has written books and papers on the Omega Point based on Pierre Teilhard de Chardin's religious ideas, which he claims is a mechanism for the resurrection of the dead. He is also known for his theories on the Tipler cylinder time machine. People have argued that his theories are largely pseudoscience.[3] Biography[edit] The Omega Point cosmology[edit] The Omega Point is a term Tipler uses to describe a cosmological state in the distant proper-time future of the universe that he maintains is required by the known physical laws. Tipler's argument that the omega point cosmology is required by the known physical laws is a more recent development that arose after the publication of his 1994 book The Physics of Immortality. Reception[edit] Selected writings[edit] Books[edit] Articles[edit] See also[edit]

Simulated Order - Jehovah - Yaldabaoth by John Lash from MetaHistory Website Spanish version Assuming the arrogant pose of a solar deity, Yaldabaoth falsely believes himself to be the only god in the entire cosmos. Thus, for Gnostics, the identification of Yaldabaoth with Jehovah of the Old Testament, a deity who suffers from this very complex of cosmic egotism, is a foregone conclusion, prefigured in the Sophianic origin myth. Being blind, he cannot perceive the Pleroma (galactic core), nor does he recognize Sophia, the cosmic current that surged from the core and produced him in the first place. He becomes infatuated, bloated with grandiosity, causing Sophia to feel shame and want to hide him from the sight of the Pleromic Aeons. "She cast him away from her radiance, so that no one among the immortal ones might see him... The Aeon Sophia is that cosmic current whose impact organizes the dema and produces the Archons. Yaldabaoth originates nothing, however. The Lord Archon is called antimimon pneuma, "counterfeit spirit."

The Duality of Philosophy tHE dUALITY oF pHILOsOPHY The Etymology of "Wisdom;" The Coiling helix of Time; The 2 names of Mary An alchemical dialectic of history. by Johnes Ruta The Etymology of "Wisdom" "Philosophy" comes to us from the ancient Greeks’ love for wisdom and knowledge, and literally the name means a "lover of Wisdom." In Western thought, the Philosophical principles of geometry and harmony have given us our: 1. guidelines in the recognition of patterns; 2. terms of phenomena we categorize; 3. basis for our understanding of Nature, and physical science; 4. organization of data systems; 5. structure of Western music, and visual design. But the notion of the "lover of Wisdom," in a still-evolving Western philosophical tradition begun by Pythagoras, conceals an even deeper physical relationship between "intuitive knowledge" and the liquid, "oceanic" sexual manifestations of the human body. But the idea of the vision of "philosophy" is never thoroughly abandoned. The Double Helix of Sophia, 13th Aeon

World view Worldview remains a confused and confusing concept in English, used very differently by linguists and sociologists. It is for this reason that James W. Underhill suggests five subcategories: world-perceiving, world-conceiving, cultural mindset, personal world, and perspective.[3][4][5] The term worldview is a calque of the German word Weltanschauung [ˈvɛltʔanˌʃaʊ.ʊŋ] ( Assessment and comparison[edit] One can think of a worldview as comprising a number of basic beliefs which are philosophically equivalent to the axioms of the worldview considered as a logical or consistent theory. If two different worldviews have sufficient common beliefs it may be possible to have a constructive dialogue between them.[8] A third alternative sees the worldview approach as only a methodological relativism, as a suspension of judgment about the truth of various belief systems but not a declaration that there is no global truth. Linguistics[edit] Weltanschauung and cognitive philosophy[edit] Folk-epics[edit]