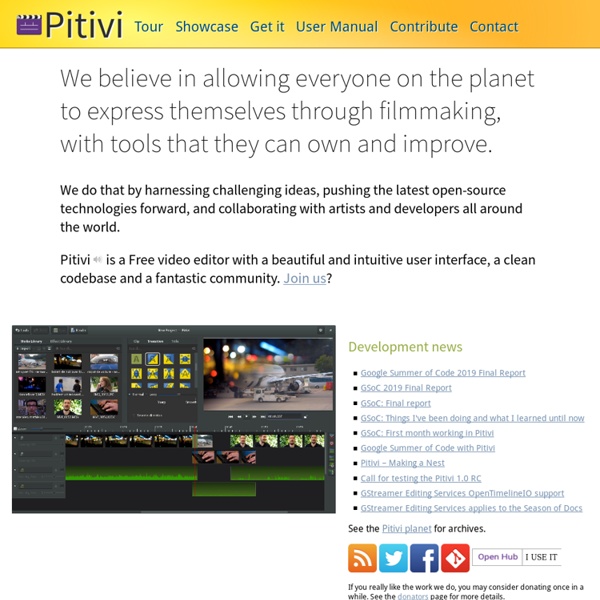 Inkscape. Draw Freely. OpenShot Video Editor Linux Mint OpenShot Video Editor: OpenShot 1.0 Has Arrived! I am proud to announce that OpenShot Video Editor 1.0 has just been released! This release is jam-packed full of new features, bug fixes, and some shiny new graphics! We hope you enjoy it!Transition snapping - Transitions now snap to the nearest clip or the play-head.Improved Stability - Just try and crash OpenShot now. New Profile - HDV 720p 24 fpsMore Languages - There are now 42 languages included with OpenShot version 1.0! Speaking UNIX, Part 11: Ramble around the UNIX file system I just purchased a Global Positioning System (GPS) navigation device and, after only a handful of uses, I'm hooked. Getting from Point A to Point B is now a snap. No more MapQuest. No more guessing which way is east. Let's indulge my wanderlust this month and ramble around the UNIX® file system. What's in a file name? The files on a UNIX machine are organized in a hierarchy. If you change your working directory to / and run ls, you'll see several subdirectories with cryptic names like etc, bin, var, home, and tmp. /bin is but one of many directories that contain applications and utilities. The directory names above are the most common, although some flavors of UNIX diverge slightly. Keeping tradition In fact, the names etc, bin, lib, and man are so entrenched in UNIX culture that it is traditional to label directories of like purpose found elsewhere on the machine with the same name. Mimicking canon, /usr/local frequently has etc, bin, lib, and man. Other points of interest /etc /var/spool

project homepage MiNIVS - what's that? MiNI Video Studio is a program for non-linear video editing. A short intro This program is being created as a university project by a group of students. Features - what can we do with it The program allows the user to create a movie from a set of movies, audio tracks, pictures, effects and transitions. How does it look like - a few screenshots, and so on Our team Da boss: Marek Hański and other, not less significant developers Cezary Bieńkowski Dorota Dębowska Cyryl Matuszewski Bartek Michałowicz Witold Pilarski Future plans and the first release Updates, bug fixes, and so on...

nvidia in ubuntu From This guide is maintained at the Linux Center of the University of Latvia. Please help test and perfect this guide. To edit pages you need to register. Ubuntu 7.04 (Feisty Fawn) was released on April 19th, 2007 and is no longer supported. Other Versions See this complete list of older and newer versions. To upgrade an outdated version or update your current version, read #Updates and Upgrades. General Notes This is an Unofficial Ubuntu 7.04 (Feisty Fawn) Starter Guide. If you are using 64-bit version replace any "i386" with "amd64" Are there other *buntu guides? Desktop environments Where to view Ubuntu screenshots / screencast This is the Gnome based desktop environment, which is the default for Ubuntu. Where to view Kubuntu screenshots / screencast This is the KDE based desktop environment. Kubuntu 7.04(Feisty Fawn) Screenshots Tour How to install KDE (Kubuntu) sudo apt-get install kubuntu-desktop The system will ask you if you want to use kdm or gdm. gdm is recommended. How to install FluxBox #!