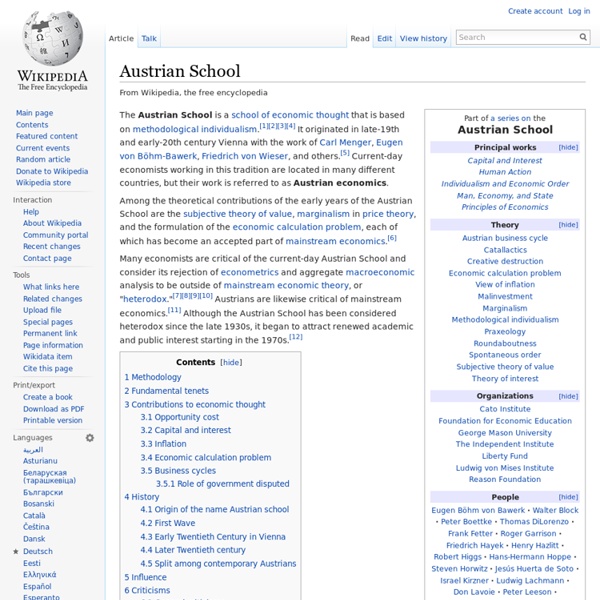 The Austrian School is a school of economic thought that is based on methodological individualism.[1][2][3][4] It originated in late-19th and early-20th century Vienna with the work of Carl Menger, Eugen von Böhm-Bawerk, Friedrich von Wieser, and others.[5] Current-day economists working in this tradition are located in many different countries, but their work is referred to as Austrian economics. Among the theoretical contributions of the early years of the Austrian School are the subjective theory of value, marginalism in price theory, and the formulation of the economic calculation problem, each of which has become an accepted part of mainstream economics.[6] Many economists are critical of the current-day Austrian School and consider its rejection of econometrics and aggregate macroeconomic analysis to be outside of mainstream economic theory, or "heterodox. Methodology[edit] In the 20th century, various Austrians incorporated models and mathematics into their analysis. Inflation[edit]

Carl Menger Carl Menger (German: [ˈmɛŋɐ]; February 23, 1840 – February 26, 1921) was the founder of the Austrian School of economics. Menger contributed to the development of the theory of marginal utility, which contested the cost-of-production theories of value, developed by the classical economists such as Adam Smith and David Ricardo. Biography[edit] During the course of his newspaper work he noticed a discrepancy between what the classical economics he was taught in school said about price determination and what real world market participants believed. In 1872 Menger was enrolled into the law faculty at the University of Vienna and spent the next several years teaching finance and political economy both in seminars and lectures to a growing number of students. In 1876 Menger began tutoring Archduke Rudolf von Habsburg, the Crown Prince of Austria in political economy and statistics. In the late 1880s Menger was appointed to head a commission to reform the Austrian monetary system. Works[edit]

Eugen von Böhm-Bawerk Eugen Böhm Ritter von Bawerk (German: [bøːm ˈbaːvɛʁk]; born Eugen Böhm; February 12, 1851 – August 27, 1914) was an Austrian economist who made important contributions to the development of the Austrian School of economics. He was the Austrian Minister of Finance intermittently from 1895–1904, and also wrote a series of extensive critiques of Marxism. Biography[edit] While studying to be a lawyer at the University of Vienna, he read Carl Menger's Principles of Economics. After completing his studies in 1872, he entered the Austrian ministry of finance. In 1889 he became councillor in the ministry of finance in Vienna, and represented the government in the lower house on all questions of taxation.[3] He drafted a proposal for direct-tax reform. He then became Austrian minister of finance in 1895. In 1897 he was ambassador to the German court. George Reisman has said that he is second most important "Austrian economist after Ludwig von Mises Published work[edit] See also[edit] Notes[edit] Works

Murray Rothbard Murray Newton Rothbard (March 2, 1926 – January 7, 1995) was an American economist , historian , and political theorist . His work, which refers extensively to Austrian School economist Ludwig von Mises , has profoundly influenced the American libertarian movement by formulating a body of thought Rothbard called " anarcho-capitalism " or free-market anarchism . [ 2 ] [ 3 ] [ 4 ] [ 5 ] Rothbard wrote more than twenty books and is considered a central figure in the American libertarian movement. [ 6 ] Rothbard asserted that all services provided by monopoly governments could be provided more efficiently by the private sector. He viewed many regulations and laws ostensibly promulgated for the " public interest " as self-interested power grabs by scheming government bureaucrats engaging in dangerously unfettered self-aggrandizement, as they were not subject to market disciplines . [ edit ] Life and work Rothbard with his wife, JoAnn Schumacher [ edit ] Economic writings [ edit ] Ethics