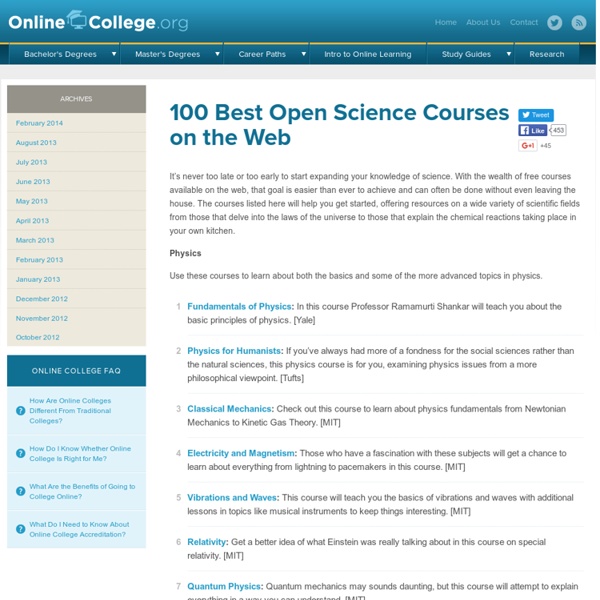 It’s never too late or too early to start expanding your knowledge of science. With the wealth of free courses available on the web, that goal is easier than ever to achieve and can often be done without even leaving the house. The courses listed here will help you get started, offering resources on a wide variety of scientific fields from those that delve into the laws of the universe to those that explain the chemical reactions taking place in your own kitchen. Physics Use these courses to learn about both the basics and some of the more advanced topics in physics. Fundamentals of Physics: In this course Professor Ramamurti Shankar will teach you about the basic principles of physics. Chemistry Give these chemistry courses a try to get a handle on many aspects of the subject. Freshman Organic Chemistry: Use the lessons in this course to teach yourself about the theories and principles of organic chemistry. Biology Study cells, systems, plants and more through these free courses. Astronomy

A Gentle Introduction to Python Before we dive in, we have to make sense of what it means to write computer code. Python is just one of many different languages, or ways to make computers do something that we want it to. And yes, computers really only do what we tell them to do… But gosh, sometimes it doesn’t feel like that, does it? A great way to start thinking about Python is with some easy exercises and reading material from the MIT OpenCourseWare course called “A Gentle Introduction to Programming Using Python”. Stonehenge Discovery 'Blows Lid Off' Old Theories About Builders Of Ancient Monument From who built it to what it was used for, Stonehenge is surrounded by many enduring mysteries — and researchers from the University of Buckingham in England now say they’ve solved one of them. “For years people have been asking why is Stonehenge where it is, now at last, we have found the answers,” David Jacques, an archaeology research fellow at the university, said in a written statement. Last October, Jacques led an archaeological dig at a site 1.5 miles from Stonehenge. His team unearthed flint tools and the bones of aurochs, extinct cow-like animals that were a food source for ancient people. Carbon dating of the bones showed that modern-day Amesbury, an area that includes the dig site and Stonehenge itself, has been continuously occupied since 8820 B.C.

250+ Killer Digital Libraries and Archives Hundreds of libraries and archives exist online, from university-supported sites to accredited online schools to individual efforts. Each one has something to offer to researchers, students, and teachers. This list contains over 250 libraries and archives that focus mainly on localized, regional, and U.S. history, but it also includes larger collections, eText and eBook repositories, and a short list of directories to help you continue your research efforts. death The sites listed here are mainly open access, which means that the digital formats are viewable and usable by the general public. So, such sites as the Connecticut Digital Library (iCONN) are not listed, as they operate on the premise that the user has a Connecticut library card in his or her possession.

Open Educational Resources Project (Collections Strand) - OeRBITAL UK Centre for Bioscience OER project - Phase 2 The UK Centre for Bioscience sucessfully bid for funding to undertake a 'Collections Strand' Open Educational Resources project over 2010-2011 following its success with the phase 1 (OER pilot projects) Interactive Laboratory and Fieldwork Manual for the Biosciences project. Working with ten discipline consultants from across the country we have produced a wiki for the benefit of the bioscience community to explore the potential of OERs across a range of disciplines.

Free Software [ Home | What's New | Public Pages | Tell Friends | Privacy Policy | FAQ | Help | About myHq ] Questions?/Suggestions?/Enquiries? Contact the webmaster@myhq.comv2.0 Last updated :- 22:53 07-12-2011 EST myHq was created by eMason, also the creator of bookHq What Nagasaki looked like before and after the bomb Three days after leveling the city of Hiroshima with a uranium atomic bomb known as a "Little Boy," the United States dropped the more menacing-sounding "Fat Man" over Nagasaki. It was Aug. 9, 1945. Some 40,000 to 80,000 people were killed, and much of the city was pulverized. Nuclear weapons would never again be used in warfare. This is what Nagasaki looked like 70 years ago, before the bomb fell:

30 Fantastic Websites To Lose Yourself In If you follow me on Twitter you might know that I moved to London last September. You might also know that since then I’ve had nothing but trouble trying to get an Internet connection set up in my home. Fortunately, last week I finally got everything up and running and to mark my triumphant return to the world of the Internet I went a little crazy and shared 30 of my favourite websites on Twitter. Courses Cybersecurity Launch your career in a high demand industry that projects 2 million new jobs annually by earning a Cybersecurity MicroMasters Credential from RIT. MicroMasters Program 64 Things Every Geek Should Know If you consider yourself a geek, or aspire to the honor of geekhood, here’s an essential checklist of must-have geek skills. The term ‘geek’, once used to label a circus freak, has morphed in meaning over the years. What was once an unusual profession transferred into a word indicating social awkwardness.