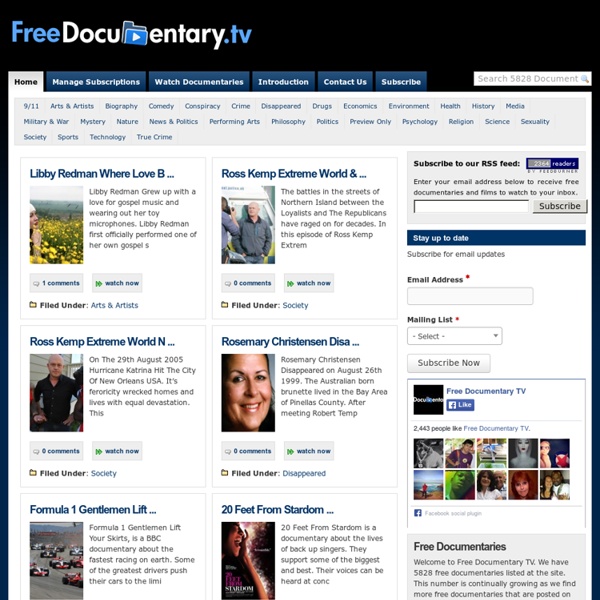 Libby Redman Where Love B ... Libby Redman Grew up with a love for gospel music and wearing out her toy microphones. Libby Redman first officially performed one of her own gospel s Filed Under: Arts & Artists Ross Kemp Extreme World & ... The battles in the streets of Northern Island between the Loyalists and The Republicans have raged on for decades.

125 Great Science Videos: From Astronomy to Physics & Psychology Astronomy & Space Travel A Brief, Wondrous Tour of Earth (From Outer Space) – Video – Recorded from August to October, 2011 at the International Space Station, this HD footage offers a brilliant tour of our planet and stunning views of the aurora borealis.A Universe from Nothing – Video – In 53 minutes, theoretical physicist Lawrence Krauss answers some big enchilada questions, including how the universe came from nothing.A Year of the Moon in 2.5 Minutes – Video – The Lunar Reconnaissance Orbiter has been orbiting the moon for over a year. The footage gets compressed into 2 slick minutes.A Day on Earth (as Seen From Space) – Video – Astronaut Don Pettit trained his camera on planet Earth, took a photo once every 15 seconds, and then created a brilliant time-lapse film.Atlantis’s Final Landing at Kennedy Space Center – Video – After more than 30 years, the space shuttle era comes to a close. Video runs 30 minutes. Physics Biology & Chemistry

Taking Charge of Your Health & Wellbeing What is Ayurvedic medicine? Ayurvedic medicine evolved in India, and is considered to be the world's oldest healthcare system. It is named for the Sanskrit word Ayurveda, meaning the "science of life." If that sounds like an all-encompassing definition, it is. Ayurvedic medicine is entirely holistic. Tag and Chat Confused colleagues will ask me about Twitter:What are those number sign thingies? How do you chat?Do I friend or follow someone? Where do I find people to follow? Using Discussion Board rubrics - eTopics Basic rubric Instructors teaching online courses may use this streamlined rubric to assess student discussion board participation. Grading Criteria for Weekly Discussion Question Postings (4 points/week, 60 points total) Your weekly postings will be assessed using the following guidelines. Of course, your postings are expected for each weekly unit of the course and the final evaluation will take place the final week of class.

Free Tool to Create Interactive Assignments and Track Learner Performance Knowmia has supported so many teachers flipping their classrooms, it’s especially popular in U.S. We’ve covered their free iPad App – Knowmia Teach (iTunes link), which can replace the paid App – Explain Everything. And it’s not just a video recording tool, it connects to a whole lot more support for teachers! In case you aren’t aware of their free resources for creating dynamic lessons, here they are: Inspiration Corner : featuring a wide range of video lessons from teachers who have used Knowmia Teach and other lesson creation tools;

15 Fantastic Horror Films Directed by Women Most horror movies are generally told from a male perspective, despite the fact that studies have shown the audiences for these films are 50% female. There have been some powerful genre movies made by women, featuring feminist leanings and a strong female viewpoint. We wanted to highlight these works — those films that bypass the stereotypical (naked) damsel in distress trope and call attention to the male gaze, sometimes turning it back onto itself. The George Lucas Educational Foundation ​We are dedicated to transforming kindergarten through 12th-grade (K-12) education so all students can thrive in their studies, careers, and adult lives. We are focused on practices and programs that help students acquire and effectively apply the knowledge, attitudes, skills and beliefs to achieve their full potential. What We Do 1.

Digital Skills Every Teacher should Have By EdTech Team Updated on march 2, 2015 : The original list that was created in 2011 comprised 33 skills , after reviewing it we decided to do some merging and finally ended up with the 20 skills below. The 21st century teacher should be able to : 1- Create and edit digital audio Here are some tools for teachers to develop this skill :Free Audio Tools for Teachers Tools for Video Editing and Conferencing Converter Freemake offers freeware in the truest sense of the word: no feature or time limitations, includes Video Converter, Video Downloader, YouTube Converter, Audio Converter and Free Music Box! Video editing, animation creation and related tools Animoto can create presentations incorporating images, video clips, music and text.

Most Anticipated Horror Movies of 2014 « Rhino's Horror Last year, just as 2013 was rolling in, I made a list of the most anticipated horror movies of 2013. Some of them turned out to be a hit like Stoker, The Conjuring, Byzantium and Evil Dead while others were quite the disappointment as we saw both Carrie and Oldboy falling short of expectations. Now, I’ll be turning my attention to what horror has to offer in 2014. Below is a list of not only my most anticipated horror films of 2014, but a lot of what you’ll be seeing around these parts over the next year. There are going to be plenty of amazing horror films to grace the screen next year, the problem is that we haven’t even heard of a lot of them yet. That being said, here is a list of some of the bigger films that the genre has to offer in 2014 as well as a couple of unknown films that are worth keeping a close eye on.

10 Examples Of Disruptive Cloud-Based Learning 10 Examples Of Disruptive Cloud-Based Learning by Charles Samuel, Senior Editor at GetVoIP I watched a video recently that made me think hard about the future of education. In it, education researcher Sugata Mitra calmly posits that the education system we see around us- the one that’s often casually referred to as “broken”- isn’t hopeless at all.

Experimenting with the Mastery Flip.. In the fall of 2011, I piloted 1 class with the flip classroom. In January of 2012, I decided to roll it out with all four sections of 8th grade science and not only that (at this point, I must have lost my mind), I decided to try to the mastery flip technique. I am not going to lie, I spent most if not all of my Christmas break in 2011 assembling the pieces of trial run. Since my school district is not 1 to 1, I had to be creative and design a way that could work for my classroom. I was able to sign a laptop cart out for every Monday and Friday during the course of the unit. I would have loved to have allowed students to try self-pacing, however with the lack of computer access, I struggled with a way to accomplish this.