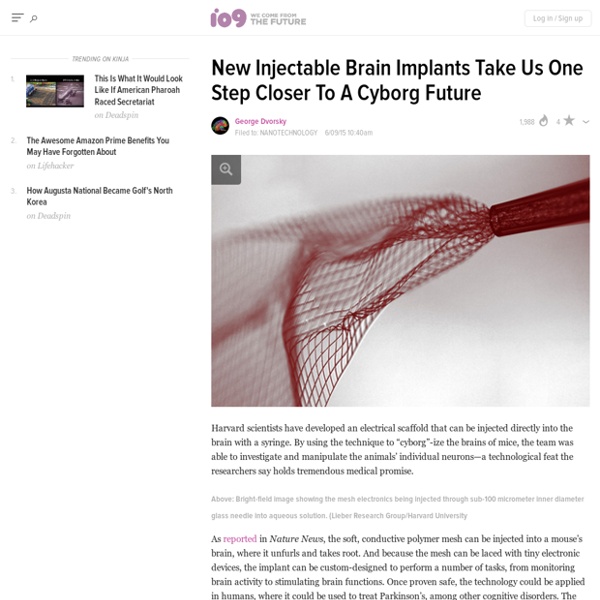 Scientists create artificial link between unrelated memories The ability to learn associations between events is critical for survival, but it has not been clear how different pieces of information stored in memory may be linked together by populations of neurons. In a study published April 2nd in Cell Reports, synchronous activation of distinct neuronal ensembles caused mice to artificially associate the memory of a foot shock with the unrelated memory of exploring a safe environment, triggering an increase in fear-related behavior when the mice were re-exposed to the non-threatening environment. The findings suggest that co-activated cell ensembles become wired together to link two distinct memories that were previously stored independently in the brain. "Memory is the basis of all higher brain functions, including consciousness, and it also plays an important role in psychiatric diseases such as post-traumatic stress disorder," says senior study author Kaoru Inokuchi of the University of Toyama.

Singularitarianism Singularitarianism is a technocentric ideology and social movement defined by the belief that a technological singularity—the creation of superintelligence—will likely happen in the medium future, and that deliberate action ought to be taken to ensure that the Singularity benefits humans. Singularitarians are distinguished from other futurists who speculate on a technological singularity by their belief that the Singularity is not only possible, but desirable if guided prudently. Accordingly, they might sometimes dedicate their lives to acting in ways they believe will contribute to its rapid yet safe realization.[1]

Scientists Created False Happy Memories In Mice Interesting. I have to be a little bit of a behavior pedant, though, and point out that they did not actually create any "false memories." That would imply that the mice had some sort of conscious remembrance of experiencing rewards in that place, which this study gives us no reason to assume. I Have Seen The Future, And Its Sky Is Full Of Eyes Allow me just a little self-congratulatory chest-beating. Four years ago I started writing a near-fiction thriller about the risks of swarms of UAVs in the wrong hands. Everyone I talked to back then (including my agent, alas) thought the subject was implausible, even silly. Well, it’s not like I’m the next Vernor Vinge — it always seemed like a pretty blatantly obvious prediction to me — but I am pleased to see that drones and drone swarms have finally become the flavor of the month.

Researchers find neural switch that turns dreams on and off At the flip of a switch, University of California, Berkeley, neuroscientists can send a sleeping mouse into dreamland. The researchers inserted an optogenetic switch into a group of nerve cells located in the ancient part of the brain called the medulla, allowing them to activate or inactivate the neurons with laser light. When the neurons were activated, sleeping mice entered REM sleep within seconds. REM sleep, characterized by rapid eye movements, is the dream state in mammals accompanied by activation of the cortex and total paralysis of the skeletal muscles, presumably so that we don't act out the dreams flashing through our mind. Inactivating the neurons reduced or even eliminated a mouse's ability to enter REM sleep.

Class 17 - Deep... Peter Thiel’s CS183: Startup - Class 17 - Deep Thought He is an essay version of class notes from Class 17 of CS183: Startup. Errors and omissions are mine. Three guests joined the class for a conversation after Peter’s remarks: First Videos Created of Whole Brain Neural Activity in an Unrestrained Animal The fundamental challenge of neuroscience is to understand how the nervous system controls an animal’s behavior. In recent years, neuroscientists have made great strides in determining how the collective activity of many individual neurons is critical for controlling behaviors such as arm reach in primates, song production in the zebrafinch and the choice between swimming or crawling in leeches. The problem is that neuroscientists can only study the role that small groups of neurons play in these behaviors. That’s largely because it is hard to watch the individual behaviors of densely packed neurons.

Extinction Timeline: what will disappear from our lives before 2050 When people talk about the future, they usually point to all the new things that will come to pass. However the evolution of human society is as much about old things disappearing as new things appearing. This means it is particularly useful to consider everything in our lives that is likely to become extinct. That Time When Scientists Zapped Braille Directly Into People's Brains Oh, how I miss the late 60s and 70s, when scientists were beaming all sorts of things into people! Braille, LSD, sublimenal messages, syphillis (just wrapping up the tests, thanks to those pesky journalists), cold and flu viruses.....damn fine time to be an unknowing guinea pig (except for the Braille, though)! Flagged

Infinity Point Will Arrive by 2035 Latest Eray Ozkural December 23, 2013 During writing a paper for the 100 Year Starship Symposium, I wished to convince the starship designers that they should acknowledge the dynamics of high-technology economy, which may be crucial for interstellar missions. Thus motivated, I have made a new calculation regarding infinity point, also known as the singularity. Here's how Obama's brain mapping project will actually work Believe it or not, the tech to do this will be a confluence actually. In order to map the brain you need a high resolution net you can put inside the brain. The only way to achieve that is to build technology that can sit on the neurons themselves and monitor/inject activity by using the brain's existing processes. Individually these nano-devices (because that's what you need) are fragile and won't last long - and if left in place after they fail, would cause damage. So you need another technology capable of running around, harvesting unused, unnecessary, or undesired material from the body to maintain, repair, and replace the tech sitting on the neurons. So why is this important?

The Hivemind Singularity - Alan Jacobs In a near-future science fiction novel, human intelligence evolves into a hivemind that makes people the violent cells of a collective being. Slime mold network formation (Science). New Model Army, a 2010 novel by the English writer Adam Roberts, concerns itself with many things: the intimacy shared by soldiers at war, the motivating powers of memory and love, the rival merits of hierarchical and anarchic social structures, the legitimacy of the polity known as Great Britain, the question of European identity. Also giants. Brain circuit problem likely sets stage for the 'voices' that are symptom of schizophrenia 5-Jun-2014 [ Print | E-mail ] Share [ Close Window ] Contact: Carrie Strehlaucarrie.strehlau@stjude.org 901-595-2295St.

The best visuals to explain the Singularity to senior executives Tomorrow morning I’m doing a presentation to the top executive team of a very large organization on the next 20 years. Most of what I will cover will be general societal, business and technological drivers as well as specific strategic issues driving their business. However as part of stretching their thinking I’ll also speak a about the Singularity. As such I’ve been trying to find one good image to introduce my explanation, however I haven’t been able to find one which is quite right for the purpose.