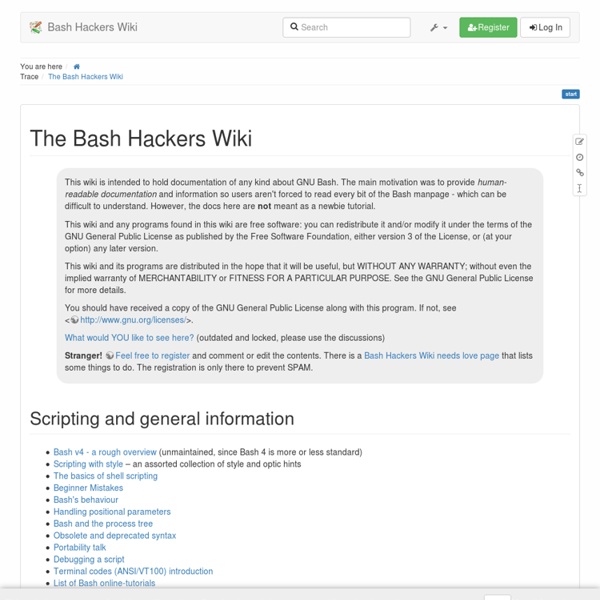 20 amusing Linux commands to have fun with the terminal The linux terminal is not always dull and boring. There are commands to make it do some funny acts to entertain the user. Here is a small collection of such commands. 1. Cowsay Install cowsay with apt. 7 Linux Shell Tips For Increased Productivity Love it or hate it, the command line is here to stay. Sure, there are new options emerging like TermKit but it’s unlikely that the command line will ever really go away. Those who take the time to master it can run productivity circles around their peers, but with the astonishing assortment of CLI tools available, where do you even begin? We’ve compiled a few of the most useful tools and tricks into this guide to help new users gain some new knowledge, and old pros learn some new tricks.

Cheat Sheet: Crontab by Example Today's article may be pretty basic for regular readers but hopefully some may find it useful. This article will cover creating a crontab entry and show some examples of common crontabs. The Cron daemon is a service that runs on all main distributions of Unix and Linux and specifically designed to execute commands at a given time. These jobs commonly refereed to as cronjobs are one of the essential tools in a Systems Administrators tool box. Find & Scan Wireless Networks from the Command Line in Mac OS X A long hidden airport command line utility buried deep in Mac OS X can be used to scan for and find available wireless networks. This powerful tool is very helpful for network admins and systems administrators, but it’s handy for the average user to help discover nearby wi-fi routers as well. Accessing the Wi-Fi Utility in OS X Command Line To use this tool to find nearby wifi networks, the first thing you’ll want to do is create a symbolic link from the airport utility to /usr/sbin for easy access. The command for this varies per version of OS X in use, select which is relevant to your OS X version on the Mac in question. Launch the Terminal and type the following command:

Crazy POWERFUL Bash Prompt From setting the window title to show the last run command (filtered), saving your history and keeping multi-session history intact, resetting the color/cursor/highlighting of errant color-emitting commands, these 2 prompt examples do more than meet the eye and are extremely fast. Don't have much time or just don't care? No problem, this is a simple copy and paste... here's one to start (all 1 line, just cut and paste right into the shell, once you've made sure its safe).

How to Learn bash shell and scripting – The best tutorials for bash beginners Bash (Bourne-Again SHell) is a Linux and Unix-like system shell or command language interpreter. It is a default shell on many operating systems including Linux and Apple OS X. If you have always used a graphic user interface like KDE or Gnome or MS-Windows or Apple OS X, you are likely to find bash shell confusing. finiteloops.com Unfortunately, the Terminal.app comes with OS 10.4 doesn’t have the tab functionality. Most of the Mac users who like to work on several instances of shell without cluttering the desktop use iTerm. However, there is a nother alternative to this called screen. screen is a powerful shell command which lets you open multiple instances of shell in a single window. You can use default keyboard shortcuts to navigate between different instances or you can even define your own. To make use of the screen command you should first create a configuration file and save it in user directory.

Shell startup scripts — flowblok’s blog If you’re a regular shell user, you’ve almost certainly got a .bash_profile or .bashrc script in your home folder, which usually contains various tweaks, such as setting environment variables (adding that directory to $PATH), telling your shell to do clever things (like set -o noclobber) and adding various aliases to commands (like alias please=sudo). (If you’re really organised, you’ll have all your dotfiles in a repository somewhere so that you can keep your settings synchronised across all the machines you work on.) Anyhow, I suspect that few people know when things like .bash_profile and .bashrc actually get executed. When I started, I just followed people’s advice of putting stuff in .bashrc, and then when it didn’t work, into .bash_profile. My solution to this problem is to define some new dotfile folders, one for each shell (.bash/, .zsh/ and .sh/), and one for the shell-independent files (.shell/): “But!”

Weave - All you need to connect, observe and control your containers What You Will Build Weave provides a software network optimized for visualizing and communicating with applications distributed within Docker containers. Using tools and protocols that are familiar to you, Weave’s network topology lets you to communicate between containerized apps distributed across multiple networks or hosts more quickly and efficiently. With Weave you focus on developing your application, rather than your infrastructure. As demonstrated in this tutorial, Weave works seamlessly with other tools such as Vagrant.

Terminal 101: Checking on Local Backups in Time Machine Posted 06/25/2012 at 12:45pm | by Cory Bohon Every Monday, we'll show you how to do something new and simple with Apple's built-in command line application. You don't need any fancy software, or a knowledge of coding to do any of these. Writing Robust Bash Shell Scripts - David Pashley.comDavid Pashley.com Many people hack together shell scripts quickly to do simple tasks, but these soon take on a life of their own. Unfortunately shell scripts are full of subtle effects which result in scripts failing in unusual ways. It’s possible to write scripts which minimise these problems. In this article, I explain several techniques for writing robust bash scripts. How often have you written a script that broke because a variable wasn’t set? I know I have, many times.