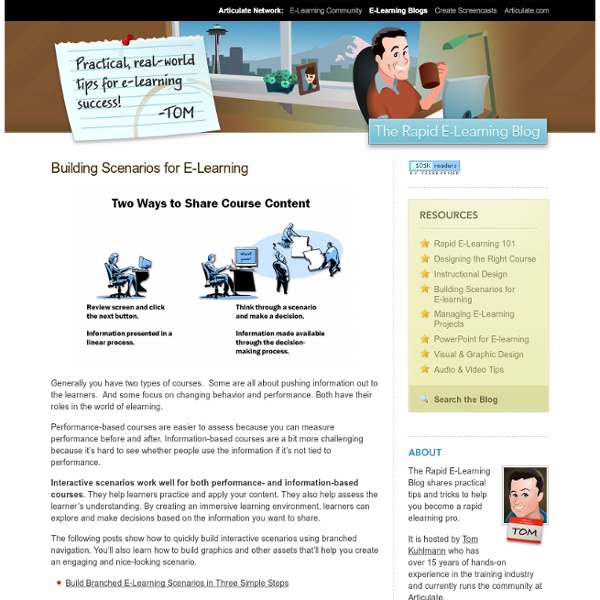 Generally you have two types of courses. Some are all about pushing information out to the learners. And some focus on changing behavior and performance. Both have their roles in the world of elearning. Performance-based courses are easier to assess because you can measure performance before and after. Interactive scenarios work well for both performance- and information-based courses. The following posts show how to quickly build interactive scenarios using branched navigation.

How Students Can Use Social Media To Actually Learn Real World Skills Owing to the present difficult economic situation, financial literacy has turned out to be one of the hottest topics of discussion in the media. Being economically savvy is extremely important for making the type of smart money decisions, that’s essential for having a good standard of living. Your college years must be the years of gaining knowledge, but nobody is truly conscious of the significance of financial literacy. A majority of the college students feel that their institution didn’t really train them for the “real world”. With no real work experience and no savings, a number of students are finding it difficult to make ends meet. When it comes to financial education, social media plays an important role. According to a study conducted by the Higher Education Research Institute, a majority of the first year undergraduates spend time on social networking websites. Social networking sites are also an affordable means to communicate news to both students and alumni.

How To Use Twitter For Teaching And Learning Are you still unsure about taking the plunge into Twitter? Worried it’s not actually useful for learning or teaching? Think it’s still just about people talking about what they’re eating? Whether you’re a newbie wondering the above questions or a talented tweeter, there are always new and exciting ways to use Twitter. - Why should a teacher or education administrator use Twitter? - How do I set up an account? - What questions should I always ask myself when I follow someone? - How do I tweet? - How do I find good people to follow? Tip 40: Three Ways to Use Scenarios | Elearning Tips We’ve all heard the story by now that storytelling enhances learning; that sharing relevant examples helps both the expert and the novice forge connections with the content to ensure knowledge transfer. We’ve heard that flight simulators save lives and that practice makes perfect. And yet, scenarios and simulations can feel intimidating. They take time. We’re here to say that it can be all that, but it can also be something simpler. So let’s look at three approaches to creating scenarios in your e-learning – a bit of a scenario spectrum as we go from simple to more complex. Tell the story and then ask some questions This is a simple approach and one we use a lot, especially in more rapid e-learning programs when time is of the essence. Tell your story – as always, keep it short and sharp. For example in a program on behavior in the workplace, tell the story of a manager that might have crossed the line. The next question then goes even deeper. Ask questions throughout the scenario

In a Relationship: College Students and Their Smartphones [INFOGRAPHIC] College students aren't just concerned with getting good grades and finding the best parties. More than ever, they're using their smartphones to navigate life on campus. On the bus, waiting in line, in bed, on the treadmill and even while driving, college students can't seem to put their phones down. Thirty-five percent say they sometimes use their phones while driving but stopped at a red light, and nearly 20% say they sometimes use them while the wheels are even moving. The Internet education portal OnlineColleges pulled this data and more from sources including the Pew Internet & American Life Project, University of Colorado and Nielsen to produce the infographic below. Among other notable findings: More colleges students use iPhones than any other device, email has nearly caught text messaging as the most popular use for smartphones among college students and nearly half of students use their phones to check the weather. Thumbnail photo courtesy of iStockphoto, deepblue4you ‬

V4L A Google plan to kill carriers with WiFi is all too believable Could you live your mobile life on WiFi? Attempts to ween users off of expensive, subsidized smartphone deals have been more successful this year than every before; word earlier today that Google had acquired a WiFi hotspot company - and which later turned out to be false - was believable in part because the search company is a prime candidate for ousting cellular from the mobile equation. The ICOA deal may be fake, but Google's appetite to ditch the traditional carriers and strike out more or less alone isn't new. The original Nexus One was the company's first effort at that, an attempt to bypass the commonplace subsidized phone deals with an unlocked handset, and relegate the carriers themselves to "dumb pipe" status. It proved to be an idea ahead of its time; smartphone-naive shoppers blanched at a $529 sticker price in January 2010, and Google had to satisfy itself with carrier distribution just like everybody else.

14 Twitter Statistics You May Not Know Twitter may very well be one of the most important tools for the connected educator, student, parent, and Internet user in general. It’s a place to connect with new colleagues, learn from those you’d never normally meet in person, or just a simple way to see what’s happening right now. However you use Twitter, it’s educational, enjoyable, and fun. So what’s Twitter actually like? how many tweets are sent in a single day? How many tweets are sent per second?