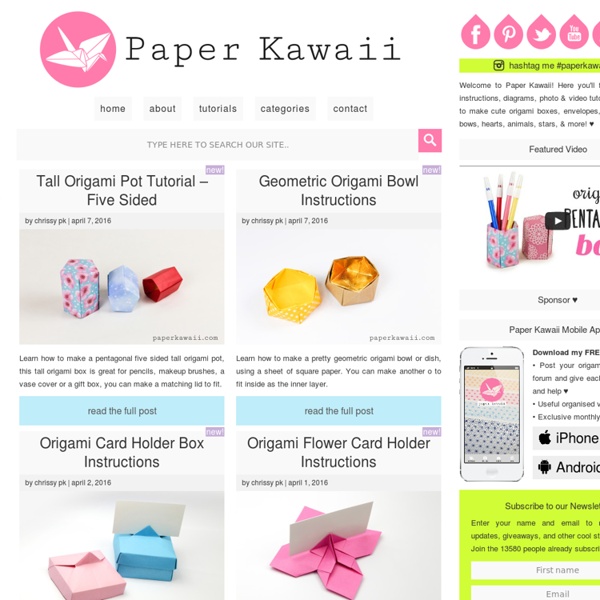 My Crafts (JeN) - AsianFanatics Forum Sammeh, on Mar 5 2006 9 05 AM, said: I like the purple swan, it has a shimmer to it. Or maybe it's just because I'm not wearing my glasses =\. Anyways, good job! I just noticed those straw flowers. some of the pictures are taken with my cellphone (like the purple swan, but it was made with nice shiny papers) JeN Sacreble, on Mar 5 2006 9 27 AM, said: wow this is impressing...really shows that you like to do stuff.. I tried to make a swan like yours one time...and got tired after halfway.. hey ! About the straw flowers, it isn't that hard, maybe at start ! ' it's finger killing lolz ! Hey everyone i just added few stuff ! From wat i have found but no time to do it !! JeN !

"Cute Food For Kids" ? Whatdoestheinternetthink.net Modular Origami Diagrams « Flotsam and Origami Jetsam Oh St. Patty’s day is near!!! For many (I am only speaking of Chicago, cause that’s what I know) it is special day celebrated in any place that serves alcohol, by the Green Chicago River, or at the parade. In honor of such a green holiday I am posting triangular pyramid tip box instructions and a Celtic cross modular (In deference to it being the holiday of a saint and all.) The tip box is made from a bill and closes. The modular is of an almost identical unit that an Italian folder, Franco Pavarin, published, with one difference. Tip Box Instructions 1. 2. 3. 4. 5. 6. 7. 8. 9.

Dave's Geeky Ideas Just a note to say I haven’t fallen off the face of the earth! I’ve been doing a lot of work on this blog the last few weeks, it’s just not very apparent. I have been: - Migrating images from Photobucket. I don’t know what I was thinking, but the vast majority of my images were hosted there. - New art. - Cleaning up existing art. - Enlarging old images. - Nixing weird posts. - Editing my written work. I’ve been chipping away at it, and I still have some work to do. When I first started this blog I was honestly just goofing around. Once I am done the repairs I have some big plans for this blog, in terms of layout and content (ever heard of Sketchfab?). In the meantime I will still post new content (both here and at Geeky Hockey – I’m also doing some repairs there too), so please stay tuned. -Dave Like this: Like Loading...

www.origamido.cz Curse words. « Fibromy-Awesome Let’s talk about curse words for a second. Because I love talking about those fuckers. Oopse! Don’t you love how someone will say “What a BITCH! I don’t know what the satisfaction is in saying curse words, but it seems like whatever point you’re making, it adds the perfect amount of emphasis. Another memory pops into my head concerning curse words. I thought about these things as I finally made it to the end of the bridge. Health, Happiness, and $%@! Like this: Like Loading... VRML Models of Modular Origami Modular Origami VRML Models Modular origami involves folding several identical or similar pieces (called units), which are then joined, usually without glue. Although I prefer single-sheet origami, some modular models are extremely attractive and elegant, not the least in the mathematical sense. Most modular units are fairly simple to fold; however, assembling some models can be quite difficult, since some units cycle or "penetrate" one another. Static diagrams and pictures are often not enough to solve placement ambiguity; in this case, assembly is greatly eased if a finished model is available for reference. These VRML ("virtual reality") models are intended as an aid to folders who didn't yet finish or don't have at hand a "real" instance of those remarkable origami creations. If your browser shows the models as text, you might have to install a plug-in or separate viewer. Copyright © 2002 Carlos A.