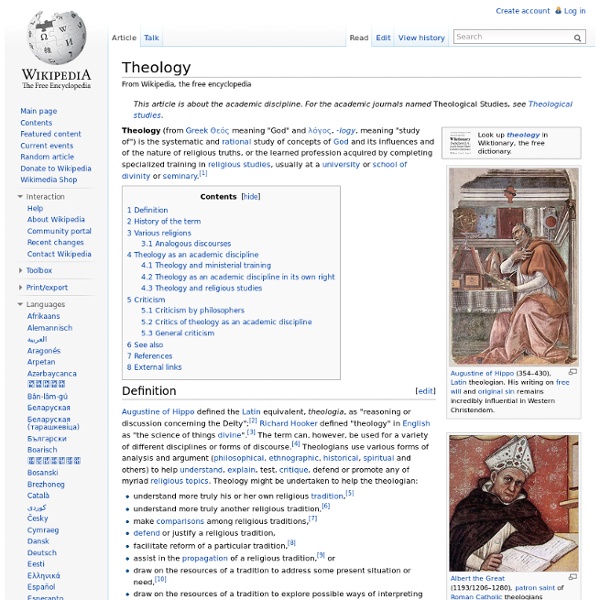 Theology is the systematic and rational study of concepts of God and of the nature of religious truths, or the learned profession acquired by completing specialized training in religious studies, usually at a university or seminary or school of divinity.[1] Definition[edit] Augustine of Hippo defined the Latin equivalent, theologia, as "reasoning or discussion concerning the Deity";[2] Richard Hooker defined "theology" in English as "the science of things divine".[3] The term can, however, be used for a variety of different disciplines or fields of study.[4] Theologians use various forms of analysis and argument (philosophical, ethnographic, historical, spiritual and others) to help understand, explain, test, critique, defend or promote any of myriad religious topics. Theology might be undertaken to help the theologian: History of the term[edit] Various religions[edit] Analogous discourses[edit] Theology as an academic discipline[edit] Theology and ministerial training[edit]

Perpetual virginity of Mary By the fourth century, the doctrine was widely supported by the Church Fathers, and by the seventh century it had been affirmed in a number of ecumenical councils.[4][5][6] The doctrine is part of the teaching of Catholicism and Anglo-Catholics, as well as Eastern and Oriental Orthodoxy, as expressed in their liturgies, in which they repeatedly refer to Mary as "ever virgin".[7][8][9] Some early Protestant reformers such as Martin Luther supported the doctrine, and founding figures of Anglicanism such as Hugh Latimer and Thomas Cranmer "followed the tradition that they had inherited by accepting Mary as 'ever virgin'" [10] However, later Reformed teaching largely abandoned it.[11][12] The doctrine of perpetual virginity is, however, currently maintained by some Anglican and Lutheran theologians.[7][13][14][15] Doctrine and representations[edit] The Greek term Aeiparthenos (i.e. Development of the doctrine[edit] Early Church[edit] Church Fathers and the Middle Ages[edit] Early reformers[edit]

Learn Biblical Languages This page was last updated 19 June 2012 General NRSV Text NotesThe New Revised Standard Bible comes with textual and translational notes that give the reader valuable information about textual variants and alternative translations. This page expands on the explanation of the notes given in NRSV Study Bibles. Should be understandable even by those who don't know the original languages. NET Bible I'm in the early stages of actually using the free online New English Translation; so far I like it very much. Fonts for Scholars If you want to include actual Greek or Hebrew characters in a word processing document, you'll need to use a special font. New Testament (Biblical) Greek Reading the New Testament (and LXX) in Greek, Aloud or Otherwise: Learn the Greek alphabet Complete with sound files, so you can learn to sound out NT Greek words. Greek New Testament Read Aloud Download or listen online, to a chapter at a time or the entire New Testament, read aloud in Greek. Biblical Greek Courses:

Incarnation (Christianity) For general uses, see Incarnation The Incarnation shown as part of a cycle of life of Jesus with the Trinity in the central column, by Fridolin Leiber, 19th century. In the Incarnation, as traditionally defined by those Churches that adhere to the Council of Chalcedon, the divine nature of the Son was united but not mixed with human nature[2] in one divine Person, Jesus Christ, who was both "truly God and truly man". The Incarnation is commemorated and celebrated each year at Christmas, and also reference can be made to the Feast of the Annunciation; "different aspects of the mystery of the Incarnation" are celebrated at Christmas and the Annunciation.[3] This is central to the traditional faith held by most Christians. The noun incarnation derives from the ecclesiastical Latin verb incarno,[4] itself derived from the prefix in- and ''caro, "flesh", meaning "to make into flesh" or "to be made flesh". Eventually, the Christian Church accepted the teaching of St. Who, being immortal,

Hebrew Language, Grammar Pronunciation-Transliteration (adapted from ) The complete original document can be obtained from the American National Standards Institute (ANSI) For the ISO standard for binary representation of Hebrew, see ISO- 8859-8. Blue letters are printed, red letters are for handwritten script. Note 29.11.98: draft ISO standard column added (based on article) in Ha'aretz weekend supplement, 27.11.98). The apostrophe ( ' ) when added to the letters gimel, zayin, and tzadik, produces three new letters which are used in modern Hebrew to represent foreign sounds (in words borrowed from French, English, Russian, ...) that do not exist in Biblical Hebrew. The standard pronunciation of modern Hebrew is a simplified version of the Sephardi pronunciation: in particular, the kaf-kuf, chet-chaf, and tet-tav pairs are pronounced identically and the alef and ayin are both silent vowel stops. t is transliterated as tet (e.g. universita), th is tav (theorema), w is vav vav Possessives:

God in Christianity Although the New Testament does not have a formal doctrine of the Trinity as such, it does repeatedly speak of the Father, the Son, and the Holy Spirit in such a way as to "compel a trinitarian understanding of God." This never becomes a "tritheism." This does not imply three Gods.[16] Around the year 200, Tertullian formulated a version of the doctrine of the Trinity which clearly affirmed the divinity of Jesus and came close to the later definitive form produced by the Ecumenical Council of 381.[17][18] The doctrine of the Trinity can be summed up as: "The One God exists in Three Persons and One Substance, as God the Father, God the Son and God the Holy Spirit."[19][20] Trinitarians, who form the large majority of Christians, hold it as a core tenet of their faith.[21][22] Nontrinitarian denominations define the Father, the Son, and the Holy Spirit in a number of different ways.[23] Development of the theology of God[edit] Overview[edit] Name[edit] Attributes and nature[edit]

Hebrew Glossary Then name Ashkenaz (Bereishit 10:3) has since the 10th century been identified with Germany. As the German and French Jews of the medieval period formed a uniform group in culture and religious customs, they were all referred to as Ashkenazim in contradistinction to the Sefardim or Spanish- Portuguese Jews. Ashkenazim are the people who use Nusach Ashkenaz, the prayer arrangement adopted by the medieval Franco-German Jews, including certain variations described as belonging to the Polish custom (Minhag Polin). In the 18th century, the Chasidic movement adopted the Sefardic arrangement of prayers; hence, the Chasidim have been called Sefardim on many occasions. The Ashkenazim in Eastern Europe developed an intense religious life, disseminating Talmudic scholarship among the people to a degree never before surpassed in Jewish history. Chasidim and Mithnaggedim and followers of the Haskalah movement (Maskilim) presented a changing pattern of types, trends and ideologies.

Pre-existence of Christ This subject is to be distinguished from pre-existence of the soul. God resting after creation - Christ depicted as the creator of the world, Byzantine mosaic in Monreale, Sicily. Depictions of God the Father became prevalent only by the 15th century, and Jesus was often shown as a substitute before then.[1] Trinitarian belief in the doctrine[edit] In the beginning was the Word, and the Word was with God, and the Word was God. This "Word" is also called God the Son or the Second Person of the Trinity. Douglas McCready, in his analysis and defence of the pre-existence of Christ,[6] notes that whereas the preexistence of Christ "is taken for granted by most orthodox Christians, and has been since New Testament times",[7] during the past century the doctrine has been increasingly questioned by less orthodox theologians and scholars.[7] James D.G. Apart from John 1:1-18 and other New Testament passages, some Trinitarian groups[who?] Personal Pre-existence[edit] Oneness Pentecostals[edit] 2.