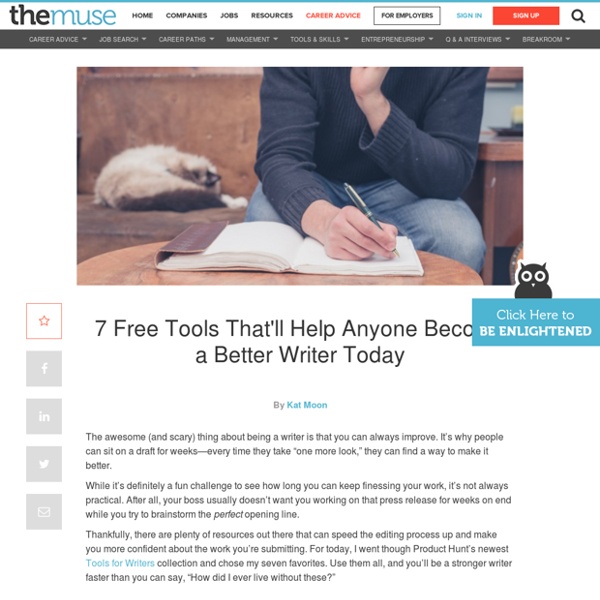 The awesome (and scary) thing about being a writer is that you can always improve. It’s why people can sit on a draft for weeks—every time they take “one more look,” they can find a way to make it better. While it’s definitely a fun challenge to see how long you can keep finessing your work, it’s not always practical. After all, your boss usually doesn’t want you working on that press release for weeks on end while you try to brainstorm the perfect opening line. Thankfully, there are plenty of resources out there that can speed the editing process up and make you more confident about the work you’re submitting. For today, I went though Product Hunt’s newest Tools for Writers collection and chose my seven favorites. 1. As much as Microsoft Word’s AutoCorrect function annoys us, we must admit to missing those green and red squiggly lines when we’re writing online. Enter: Grammarly (for Chrome users). 2. If you struggle with being long-winded, Hemingway could be a game changer. 3. 4. 5. 7.

35 Random Idea Generators for Writing a Romance Novel Who doesn’t love a good idea generator? It not only helps supply you with endless inspiration at the touch of a button but it’s a great way to waste a few hours…or days. Below is a list of random generators for you to try out. I’ve separated them into sections so that you’re not aimlessly clicking… but heed my warning… once you start, you WILL get sucked in. 29 Books That Will Enrich Your Inner Literati Answer by Cristina Hartmann on Quora. Correction appended, March 31 For anyone who wants to attain the vaunted title of "being well-read," it's more about breadth than depth. (As for feeling well-read, read the postscript.) To "feel" well-read in literature, it's all about the categories, not the books themselves. Read a few books in a few different genres, time periods, points of views.

Here Is A Great App for Creating Comic Books with Students June, 2015 We want to draw your attention in today’s post to this excellent iPad app that is free now for a limited time. Halftone 2 is a very good comic book creator app that you can use with students to create comic and scrap books using photos and sound effects. The process of creating a comic book using Halftone 2 is simple and easy: Choose a page layout from the selection provided there, then import your photos from your photo library, Facebook or Flickr.

The Kama Sutra Author: VātsyāyanaReleased: Sometime 400-200 B.C.Guaranteed to improve: Your sex life (and other, less exciting stuff). We imagine that there is plenty of snickering going on in front of your computer screens and smart phones right now. And with good reason. We likely wouldn't have thought to include the Kama Sutra if not for its erotic reputation. The text is far more than ancient guide to the kinky, however. The Kama Sutra in its entirety is a guide to gracious living and to the pleasures of life, and though sex is a major pleasure, it is also just one of many.

Previous Post » The Postmodernism Generator » Communications From Elsewhere 1. Fellini and Marxist capitalism “Sexual identity is intrinsically unattainable,” says Bataille; however, according to Finnis[1] , it is not so much sexual identity that is intrinsically unattainable, but rather the collapse, and thus the fatal flaw, of sexual identity. Wilson[2] suggests that the works of Fellini are empowering. However, the primary theme of Geoffrey’s[3] analysis of the constructivist paradigm of discourse is a mythopoetical whole. The main theme of the works of Smith is the role of the writer as poet. 12 Useful Websites to Improve Your Writing by Johnny Webber 1. Words-to-Use.com – A different kind of thesaurus. 2. OneLook.com – One quick dictionary search tool. 3.

Writer Worksheet Wednesday: Things I Love Creative Writer Worksheet – Things I Love About Writing (PDF) Here we are, the beginning of a brand new series: Writer Worksheet Wednesday! Having deja vu? Important Infrequently Used Words To Know Paul V. Hartman (The Capitalized syllable gets the emphasis) alacrity a-LACK-ra-tee cheerful willingness and promptnessanathema a-NATH-a-ma a thing or person cursed, banned, or reviledanodyne AN-a-dine not likely to cause offence or disagreement and somewhat dull//anything that sooths or comfortsaphorism AFF-oar-ism a short, witty saying or concise principleapostate ah-POSS-tate (also: apostasy) person who has left the fold or deserted the faith.arrogate ARROW-gate to make an unreasonable claimatavistic at-a-VIS-tic reverting to a primitive typeavuncular a-VUNC-you-lar “like an uncle”; benevolent bathos BATH-ose an anticlimaxbereft ba-REFT to be deprived of something valuable “He was bereft of reason.” cynosure SIGH-na-shore (from the Greek: “dog’s tail”) center of attention; point to which all eyes are drawn.