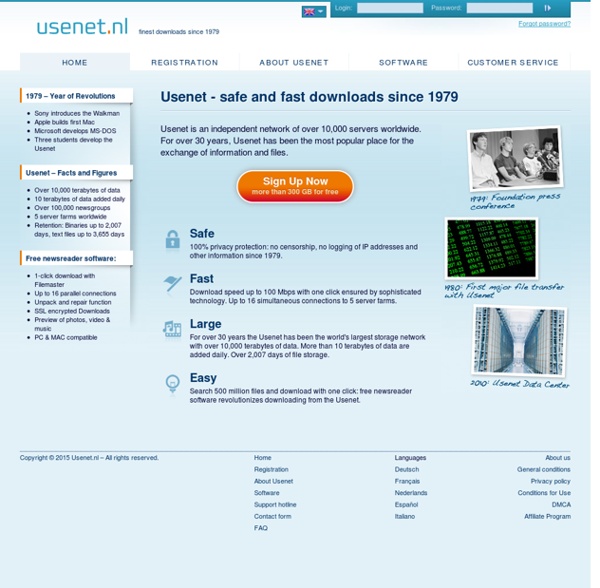 Is Usenet Safer than BitTorrent? Shhh... Stick to bittorrent kid. Usenets the devil and I highly recommend against it. Geez. Thanks for the unneeded publicity. Flagged seriously? Good lord thank you for saying this. All this "the first rule of Usenet" BS has gone on for decades - give it up people, EVERYONE ALREADY KNOWS ABOUT USENET. Sorry "everyone" doesn't know about USENET. Like I mentioned to someone else in the same thread - the only barriers to everyone using usenet the same way everyone uses Bittorrent are inconvenience and cost - the fact that it's not easy, and most ISPs don't support binary newsgroups anymore. Sourceless numbers about p2p file sharing (numbers that clearly don't include BitTorrent) are beside the point, and make the assumption that the only use for Usenet is piracy, which I think is an argument you're not trying to make, are you? The percentage of the U.S. The number supplied pertains to sharing music, but one can safely assume the numbers hold for other types of file sharing.

suso baleato: Neutralizing DNS attack on Wikileaks. Wikileaks is under attack. Our freedom of speech is under attack. You can help neutralizing DNS takedown with this simple, completely legal and mainly free ciber-actions. Just choose which best fits you: Note #1: I'm astonished. Note #2: the the post is growing so fast that is becomming difficult to read. How to neutralize attack: easy, legal and free ways to help Wikileaks.Updates from the battlefield: only facts relevant to the infowar phenomena.Mapping the #infowar: stats and graphs from the battlefield Please, don't give up. SECTION 1.- How to neutralize attack on Wikileaks Is it needless to explain that those ciberactions are not intended to just "solve" any technical problem, because the problem is not a technical -but a political one. While engaging into any of those simple simbolic but effective ciberactions you will be so expressing your support to the Wikileaks project in the public sphere. The first serious infowar is now engaged.

Gmail Motion BETA The mouse and keyboard were invented before the Internet even existed. Since then, countless technological advancements have allowed for much more efficient human computer interaction. Why then do we continue to use outdated technology? Introducing Gmail Motion -- now you can control Gmail with your body. Easy to learnSimple and intuitive gestures Improved productivityIn and out of your email up to 12% faster Increased physical activityGet out of that chair and start moving today How it works Gmail Motion uses your computer's built-in webcam and Google's patented spatial tracking technology to detect your movements and translate them into meaningful characters and commands. "Kudos to the Gmail team for bridging the divide. Adobe - Installation d'Adobe Flash Player Open standards such as HTML5, WebGL, and WebAssembly have continually matured over the years and serve as viable alternatives for Flash content. Also, major browser vendors are integrating these open standards into their browsers and deprecating most other plug-ins (like Flash Player). See Flash Player EOL announcements from Apple, Facebook, Google, Microsoft and Mozilla. By providing more than three years’ advance notice, Adobe believes that there has been sufficient time for developers, designers, businesses, and other parties to migrate Flash content to new standards. The EOL timing was in coordination with some of the major browser vendors.

Get Smarter About Your Money With Free Online Classes The more you learn about your money, the more comfortable you will feel as you transition into retirement. The following seven websites offer educational material and classes that make you smarter about your money. 1. Free Online Investment and Financial Planning Classes Offered By Fee-Only Advisors NAPFA (National Association of Personal Financial Advisors) is an association of strictly fee-only advisors. Check out their Upcoming Webinars every month and make the time to listen in and learn. 2. Dana Anspach, About.com's MoneyOver55 Expert, and the author of this article, teaches free online classes through her company, Sensible Money, LLC. 3. This investment class covers much more than investing. The investment and retirement courses come with calculators and quizzes that help you find answers to your specific questions. The course starts by allowing you to click on any of the following topics: I’m already saving or just starting to save. 4. The course contains the following 7 lessons: 5.

OpenBitTorrent - An open tracker project Best free drive cloning software? [Solved] - Apps - Apps General Discussion Your question stevydinho February 16, 2014 12:13:32 AM Tomorrow I'll be going from my current config (120GB SSD Boot disk, 320GB SATA 2 Games Disk), to a new config (64GB SSD Boot Disk, 120GB SSD Games Disk). In other words, I need to clone the 40GB worth of Windows files and applications from my 120GB 840 EVO to my 64GB SanDisk Ultra Plus that arrives tomorrow. After that I'll clone the 80GB of games from my HDD to my 120GB SSD (or I could just reinstall steam and all my games). See full content More about : free drive cloning software | E-mail me updates | Track this thread Best solution Phillip Corcoran February 17, 2014 6:51:23 AM This is very popular: Closely followed by this: Share Related resources Tom’s guide in the world Germany France Italy Ireland UK Follow Tom’s guide

500 Startups untitled BitLet - the BitTorrent Applet In the summer of 2007, shortly after launching Novlet, Daniele and I still had time to spare and were looking for something new to build. Sure enough, within a short period, Daniele came up with the idea that would soon become BitLet: a BitTorrent client that could run in a browser without requiring users to install anything on their computer. Back then, browsers had very limited capabilities: AJAX had been recently introduced (in 2005), web applications were moving from static pages to dynamic client UIs but no browser could do things like opening sockets and writing files locally, central requirements for a peer to peer file sharing application. We found a solution in an unlikely piece of technology: Java applets. Despite Java’s success as a programming language, applets had never been that popular among casual users. One of the main reasons is that Java applets didn’t look that great. The interface we had in mind was very simple, centered around a streamlined download window.