Evolving English: One Language, Many Voices 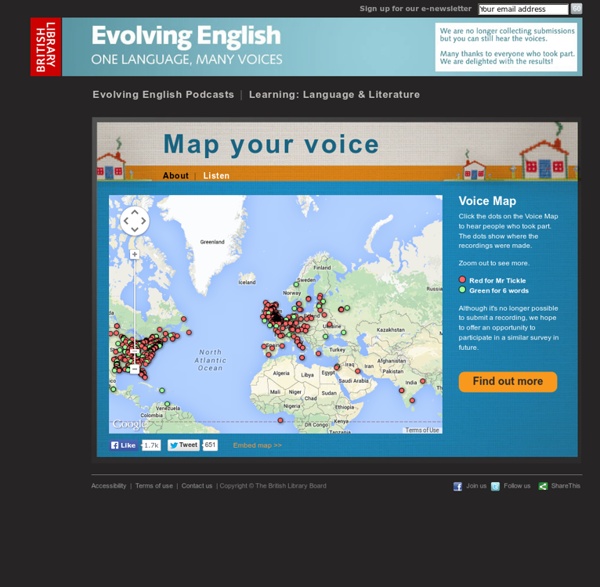 Sounds Familiar? What you can hear You can listen to 71 sound recordings and over 600 short audio clips chosen from two collections of the British Library Sound Archive: the Survey of English Dialects and the Millennium Memory Bank. You’ll hear Londoners discussing marriage and working life, Welsh teenagers talking with pride about being bilingual and the Aristocracy chatting about country houses. You can explore the links between present-day Geordie and our Anglo-Saxon and Viking past or discover why Northern Irish accents are a rich blend of seventeenth century English and Scots. What you can do In addition there are interpretation and learning packages relating to the dual themes of language variation and language change within spoken English. In Regional Voices you can explore the differences that exist in spoken English as you move across the country, while Changing Voices gives you the chance to hear how English has changed in different parts of the country over the last fifty years.

Phonesthemic Initial Sounds in English Words | DavidAppleyard.com Sometimes it is possible to have associations about a word in English merely by looking at it or hearing it spoken. On this page I'd like to draw your attention to certain initial sounds that help convey the general gist of some words you may not have met before. J. By listing selected vocabulary items according to their initial-sound associations, I hope to arouse your interest and facilitate memorization. David V. cl- fl- gl- gr- sl- sn- sp- st- str- sw- wh- wr- Scrabble Word Finder - Scrabble Solver and Anagram Helper Intonation Intonation is crucial for communication. It's also a largely unconscious mechanism, and as such, a complex aspect of pronunciation. It's no surprise that many teachers don't feel confident about tackling it in the classroom. What is intonation? What is intonation? Intonation is about how we say things, rather than what we say. It's divided into phrases, also known as 'tone-units'. Why teach intonation? Intonation exists in every language, so the concept we're introducing isn't new. Awareness of intonation aids communication. Though it's unlikely our learners will need native-speaker-level pronunciation, what they do need is greater awareness of intonation to facilitate their speaking and listening. Can I improve my own awareness of intonation? It's difficult to hear our own intonation. How I help my students Awareness-raising Some techniques I find useful for raising learners' awareness of intonation: Provide learners with models - don't be afraid to exaggerate your intonation. Conclusion

Listening for Falling and Rising Intonation (AmE) Audio for Falling and Rising Intonation Audio by TriciaG, LibriVox.org Statements Betty lives in \London. Victor works at a \bank. I haven't read this \book. We went to the theater \yesterday. Special questions What is his \name? Where does he \live? When did you \call him? Why are you \late? General questions Do you visit them /often? Have you seen my /keys? Are you ready to /start? Could you give me a /pen, please? Alternative questions Do you want /coffee or \tea? Does he speak /English or \German? Tag questions It's a beautiful \town, \isn't it? She \knows him, /doesn't she? Commands \Stop it! Close your \books. Exclamatory sentences What a wonderful \present! How \nice of you! Direct address /Peter, can you /help me? Mrs. Enumerating /One, /two, /three, /four, \five. She bought /bread, /cheese, /oranges, and \apples. Introductory phrases If he /calls, tell him about the \conference, please. According to his /words, he was at \home.

FREE Rhyming Dictionary - Find Rhyming Words in Seconds English Language (ESL) Learning Online 100 Most Often Mispronounced Words and Phrases in English There are spelling rules in English, even if they are difficult to understand, so pronouncing a word correctly usually does help you spell it correctly. Here are the 100 most often mispronounced English words ("mispronunciation" among them). Several common errors are the result of rapid speech, so take your time speaking, correctly enunciating each word. Need more help with these common errors? Check out the YourDictionary Battle of the Commonly Misspelled or Misused Words infographic for an easy-to-understand visual explanation of the most commonly confused words. Don't say: acrossed | Do say: across Comment: It is easy to confuse "across" with "crossed" but better to keep them separate. Don't say: affidavid | Do say: affidavit Comment: Even if your lawyer's name is ''David,'' he issues affidavits. Don't say: Old-timer's disease | Do say: Alzheimer's disease Comment: While it is a disease of old-timers, it is named for the German neurologist, Dr. Don't say: Antartic | Do say: Antarctic