How to Know If You Talk Too Much 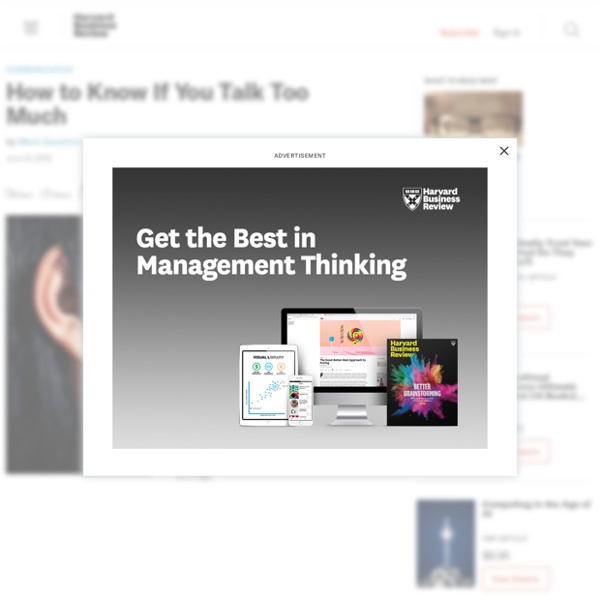 Post-its are the secret to getting people to do your bidding Maybe it's the sticky back. Maybe it's the innumerable bright colors and sizes. Whatever it is, scientists have recently learned something important about Post-it notes: People who use them get stuff done. Specifically, they get other people to get stuff done. A set of experiments by Sam Houston State University professor Randy Garner has found that when asking someone to take care of a task, adding the personal touch of a sticky note can make it something others want to complete. In one experiment, he sent surveys to three groups of 50 professors. Seventy-six percent of the professors returned the survey if they'd received a Post-it with a handwritten note, compared to just 36 percent who returned with a cover letter only. Why does this happen? Other tests Garner undertook had similar results: A handwritten note was useful, but once it was put on a Post-it, it worked magic. It isn't clear why the study is making news just now.

How to Get People to Like You: 7 Ways From an FBI Behavior Expert Before we commence with the festivities, I wanted to thank everyone for helping my first book become a Wall Street Journal bestseller. To check it out, click here. Meeting new people can be awkward. What should you say? How can you make a good impression? Research shows relationships are vital to happiness and networking is the key to getting jobs and building a fulfilling career. But what’s the best way to build rapport and create trust? Robin Dreeke can. Robin was head of the FBI’s Behavioral Analysis Program and has studied interpersonal relations for over 27 years. Robin is the author of the excellent book, It’s Not All About “Me”: The Top Ten Techniques for Building Quick Rapport with Anyone. I gave him a call to get some answers. You’re going to learn: The #1 secret to clicking with people.How to put strangers at ease.The thing you do that turns people off the most.How to use body language like a pro.Some great verbal jiu-jitsu to use on people who try to manipulate you. Here’s Robin:

The Best Times To Send Email For Replies What’s the best time to send an email? Whenever there’s less competition. Think of it as the Late Night Infomercial Effect Have you ever watched an infomercial at 3am? It’s the time period known as the “Graveyard Slot” – when TV networks sign off and give up. Similarly, when there’s little else being emailed, your emails are more likely to stand out and get noticed. We see this same line of thinking when we look at email reply rates over 24 hours. Emails sent in the early morning (between 6 and 7 am) and evening (around 8 pm) were the most effective at getting a response, with reply rates hovering around 45%. Last but not least: There is no “best day” to send email We ran the numbers and found that open and reply rates were pretty similar no matter what weekday an email was sent. Takeaways Email open and reply rates are highest on the weekends, when inbox competition is low.People are most responsive in the early morning or later in the evening.

37-secrets-only-successful-people-know The business of business isn't really all that complicated. While there is, of course, specific knowledge required for specific industries, this post encapsulates everything that you'll need to know to survive and thrive in the business world. The lists below are adapted and condensed from my recently published book, Business Without the Bullsh*t: 49 Secrets and Shortcuts You Need to Know. 1. How to Become More Optimistic EXPECT something wonderful to happen every day.TREAT people as you'd want to be treated.DON'T waste breath fighting about things you can't change.CONCENTRATE on the job at hand, not the results you seek.ASSUME other people mean well.AVOID depressing people and conversations.EAT something delicious every day.TURN OFF the background television.ADOPT an attitude of gratitude.REMEMBER that the best is yet to come. 2. 3. 4. 5. 6. 7. 8. 9. 10. 11. 12. 13. 14. 15. 16. 17. 18. 19. 20. 21. 22. 23. 24. 25. 26. 27. 28. 29. 30. 31. 32. 33. 34. 35. 36. 37.

An Introvert's Guide to Networking Every week, I get invited to another “must attend” business event sure to be full of important people who could affect my business. I know I should go, but it’s a chore. All too often, I end up standing in a corner clinging to the one person I know, feeling guilty that I’m not taking advantage of the situation. Recently, I attended a business women’s networking breakfast, held in a large warehouse near the waterfront. What next? I suspect that many of us struggle at these events, but few admit it. That’s me. But I recognize the importance of this type of activity, so I stick to it — primarily because a few chance encounters at events have led to relationships that have made all the difference in my business. Have short conversations with lots of people. I find it difficult to form deep connections at events. Focus on what you’re good at. Although I find large informal groups a challenge, I know that I perform well in formal presentation settings or one-on-one conversations.

4 Sales Follow Up Email Templates That Get Replies The importance of follow-up emails in sales goes far beyond just “checking in.” It’s actually a strategic advantage. For one thing, Yesware’s data scientists found that you have a 21% chance of getting a reply to your second email if the first goes unanswered. After that, there’s still a 25% chance that you will eventually hear back from your recipient over subsequent follow-ups. Why are so many people throwing in the towel so early? We asked the Yesware sales team to share their top four follow-up email templates. (PS – No time to read? 1. Likewise, following a voicemail with a quick email can pack a one-two punch powerful enough to break through to the busy person you’ve been trying to reach. Example: 2. Sales Rep Nico Papas has a dead simple follow-up strategy that helps him quickly capture his prospects’ attention, resulting in a 50% reply rate. 3. Ever been in a situation where you’re not sure if you’ve been following-up with the right person? 4.

10 Scientific Keys to Changing Anything In Your Life Changing your behavior is hard. Luckily, there is a scientifically proven way to do it that gives you the best chance of success. Anyone who is trying to change their behavior without understanding this science needs to stop, now. Then, start again, with better strategies, and create the life you’ve always wanted. Here’s the other thing you should know: behavior change is hard. But that’s okay. It just so happens that here at Fierce Gentleman we believe that every man is destined for greatness. So, below we give you the keys to greatness: 10 scientific keys you need to change anything in your life. Of course, information alone does not lead to life change. But never before has so much high-quality, scientifically-validated information been available for free, to anyone, to get their path started: 10 Scientific Keys to Change Any Behavior Willpower is weak. Ready for more? Click here to get the full ebook with 23 principles (No email required) But the information is out there.

42 Ways to Make People Like and Respect You We all want to be liked, yes. But—perhaps more importantly in the workplace—we all want to be respected. Respect is so important when it comes to your career development. But too often people associate earning respect with, well, not being very nice. 1. The most basic way to get respect? 2. Along similar lines, get a reputation for being incredibly dependable. 3. You know the whole “dress for the job you want” spiel? 4. In order to get respect, you have to give it—and not just to the higher-ups. 5. Seek out relationships with others in your organization who are well-respected and well-liked. 6. Know someone at another company who may be able to help with a problem a co-worker is facing, a friend who may be a great sales lead, or anyone else who you think could move the company forward? 7. If you got an invite to a snazzy event or are planning on networking after work one day, consider inviting along someone from work who you think might enjoy it. 8. 9. 10. Have a little extra time? 11.

9 Cold Email Formulas That Just Plain Work Pop quiz. What is the first goal of any cold email? To get it read. Makes sense, right? So what’s the primary goal of your first sentence? The surprisingly simple answer is…to get the second sentence read. Good news: There’s a proven formula for that. For years copywriters have used basic scientific principles of persuasion and influence to come up with a number of writing techniques that reliably draw readers into their content. Here are the nine best formulas we’ve come across, as seen in real-world cold email examples from Yesware sales reps and others. Before — Here’s your world now After — Imagine what the world would be like if you solved this problem Bridge — Here’s how to get there Open by describing a problem that is relevant to your prospect, and then describe how the world would be different if that problem didn’t exist. Example: Here’s an email that was sent our way by a rep (real name changed) from Xactly. Problem — Identify a pain point Agitate — Agitate that pain point Example:

Millennials Want to Be Coached at Work Imagine showing up to play an important college basketball game on a fabled rival’s home court, only to find you’ve forgotten your shoes. Now consider what to expect from your coach, after losing the game. A royal chewing out for not having your head in the game? The cold shoulder? Neither, according to NBA hall-of-famer Grant Hill, as he recalls the incident. The young people in your office aren’t so very different from the young Grant Hill at Duke. Our subsequent conversations with hundreds of Millennials made it clear that what they want most from their managers isn’t more managerial direction, per se, but more help with their own personal development. Inspire me. Hill reminisced that, “One of the things that really impressed me [about Coach K] … was his ability to motivate and inspire … before games, in the locker room, having that right message to get you fired up, ready to run out there, and run through a wall. Surround me with great people. Be authentic.