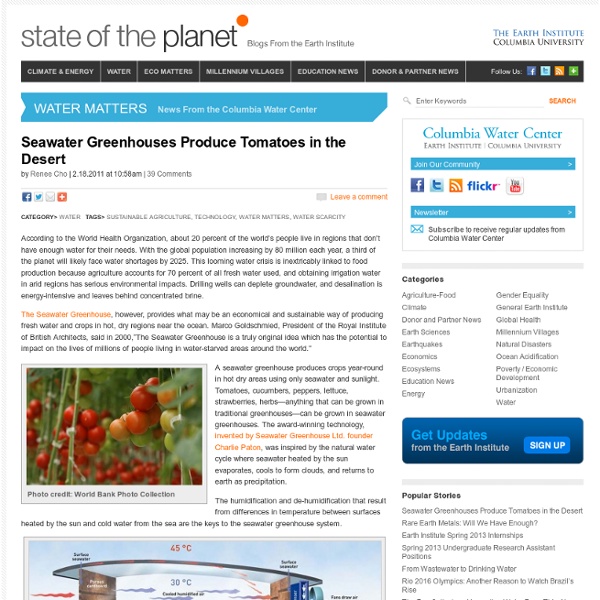 According to the World Health Organization, about 20 percent of the world’s people live in regions that don’t have enough water for their needs. With the global population increasing by 80 million each year, a third of the planet will likely face water shortages by 2025. This looming water crisis is inextricably linked to food production because agriculture accounts for 70 percent of all fresh water used, and obtaining irrigation water in arid regions has serious environmental impacts. The Seawater Greenhouse, however, provides what may be an economical and sustainable way of producing fresh water and crops in hot, dry regions near the ocean. Photo credit: World Bank Photo Collection A seawater greenhouse produces crops year-round in hot dry areas using only seawater and sunlight. The humidification and de-humidification that result from differences in temperature between surfaces heated by the sun and cold water from the sea are the keys to the seawater greenhouse system.

Gapminder: Unveiling the beauty of statistics for a fact based world view. - Gapminder.org MIT Student Develops $3 Cutting-Edge Healing Device, Field Tested in Haiti No one really knows why, but for an open wound, simply applying suction dramatically speeds healing times. (The theory is that the negative pressure draws bacteria out, and encourages circulation.) But for almost everyone, that treatment is out of reach--simply because the systems are expensive--rentals cost at least $100 a day and need to be recharged every six hours. No more. Danielle Zurovcik, a doctoral student at MIT, has created a hand-powered suction-healing system that costs about $3. Zurovcik originally intended to field-test the device in Rwanda, but then the Haiti Earthquake struck. Currently, Zurovcik is verifying the healing benefits of the device, and developing a new model that can be readily carried and concealed. [Top image: Melanie Gonick/MIT; Bottom image: Patrick Gillooly/MIT]

Humans are natural plant-eaters -- in-depth article according to the best evidence: our bodies by Michael Bluejay • June 2002 • Updated December 2015 A fair look at the evidence shows that humans are optimized for eating mostly or exclusively plant foods, according to the best evidence: our bodies. We're most similar to other plant-eaters, and drastically different from carnivores and true omnivores.1,2,3 Those who insist that humans are omnivores, especially if their argument is based on canine teeth, would do well to look at what the evidence actually shows. I first wrote this article many years ago, but since then Milton Mills, M.D. published an excellent paper which covers the anatomy of eating, so let's skip right to my table-ized summary of his research: The details are in Mills' paper. Summary of this article The anatomical evidence tells us that we're optimized for eating mostly or exclusively plant foods. Looking at the evidence fairly The most common counter-arguments "Humans have canine teeth. "Humans have always eaten meat."

Liquid to Light! Designer Ed Chew takes a green step in the right direction with the TetraBox lamp, a light object made from discarded drink packets that would have otherwise ended up in landfills already packed to the brim. The design is achieved by unfolding the packets and refolding them into hexagonal and pentagonal sections that are then pieced together to form a geodesic sphere or any other desired shape. Here, the Epcot-like ball makes an attractive overhead light and casts an impressive web of shadows and shapes on the surrounding space. Designer: Ed Chew