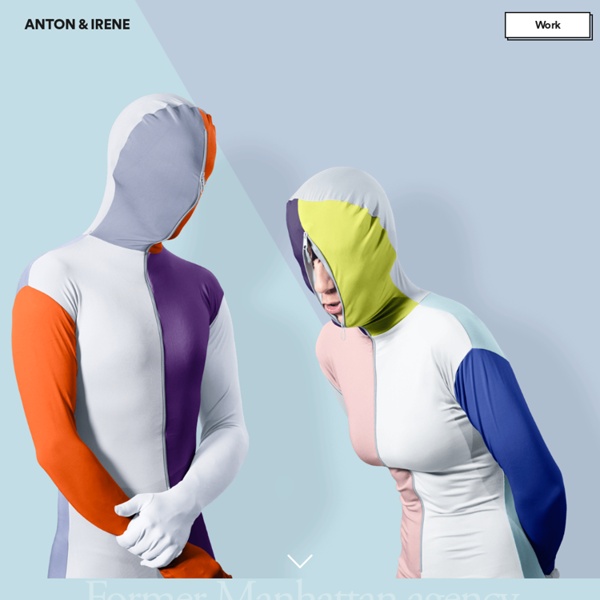 30 Great Websites with Parallax Scrolling This website uses cookies to ensure you get the best experience on our website. Learn More.GOT IT! Magazine for designers and web developers Add to Collections! sagmeisterwalsh We created a small steam room in the storefront of Deitch Projects on Grand Street in New York's Soho district that kept the windows permanently fogged up. We invited an entire array of New York designers to come and write any of our maxims (such as: assuming is stifling or worrying solves nothing) into the steamed up windows. Everybody (including such icons as Milton Glaser and Massimo Vigneli) agreed to take part.New York designers who participated: Richard The, Joe Shouldice, Anna Wehrli, Milton Glaser, Massimo Vignelli, Bob Gill, Steven Guarnaccia, Roy Rub, Seth Labenz, Nicholas Blechman, Keith Godard, Jan Wilker, B. Disciplines: Environmental

Savse Smoothies - introduction I’m pregnant and have been told that drinking non pasteurised drinks are unsafe. Are your smoothies safe to drink? We can absolutely guarantee that drinking Savse Smoothies during pregnancy is completely safe. 25 Impressive Contact forms Recognition and prestige for Web Designers and Agencies 25 Impressive Contact forms September 15 By awwwards-team In 25 beautiful contact forms, each with different style and content Share on Facebook Share on Twitter Share on Google Share on Stumbleupon Share on Pinterest Share on Linkedin This post is focused on creative and beautiful Contact Forms. Malika Favre: On The Draw – WeTransfer This Works When Malika Favre was invited on a week-long trip to the Canary Islands to create a series of illustrations for a project called On The Draw, she assumed it was some kind of scam. It seemed too good to be true. But the programme was legitimate, and Malika arrived in the colourful island of Tenerife excited to get to work. But in fact, Malika wasn’t assigned to Tenerife; she was to fly on to the dramatic volcanic island of Fuerteventura, famous for its black beaches and lunar landscapes.

60+ best free fonts, Summer 2015 2015 continues to be a fantastic year for fonts. Type designers are increasingly prolific and there’s a new design for every possible project, often completely free, or with a free option or weight. There are a couple of dominant trends for Summer: The first trend is a revived interest in ethnic and folk art styles, like the colorful approach of Tripel Six, or the charming Quirko; the second trend is a move away from the geometric sans-serifs that we’ve seen recently, towards more humanist sans-serifs, like Qontra. Today, we’ve compiled a list of the best free fonts that have been released, or received a major update, in the last three months.

stills — Electric Art Electric Art is a Sydney based, globally recognised creative production specialist leading the way in Creative Retouching & 3D, Motion, Interactive & Augmented Reality. Founded in 1993, over the years we've worked with some of the biggest brands, ad agencies & photographers around the world. With today’s proliferation of new image mediums & the shift to more web-based work & animation, we now find ourselves managing whole projects. We output assets spanning traditional print, web, animation & interactive. In short, we love to take on challenges & occupy brand new spaces. Pastel Color Schemes for Refined Website Design - MonsterPost Pastel color schemes will definitely win Oscar for the most "elegant role" among other palettes used in web design. Sites taking minimal approach by using washed out color scheme, call a feeling of sophistication and purity. These days, when uncluttered designs like Scandinavian (extremely clean with cold colors), flat and minimal rock the web, websites in muted colors are in a great favor. If you look at most sites, you'll notice how clean they are. The lightness of their designs reminds the one of the feather.

themeforest Nyte is a multipurpose psd template for agencies and development companies who want to look different. It is designed according to Bootstrap 3 grid system and is completely customizable. PSD layouts included: The main homepage layout “01_homepage.psd”Case Study layout “02_case_study.psd”Blog List layout “03_blog_list.psd”Single Blog layout “04_blog_single.psd”Team layout “05_team.psd”What We Do layout “06_what_we_do.psd” What you get: 6 high resolution Retina ready psd templates with six different layouts1 email client psd template which is completely vector based and is included in the homepage psd fileIcons as smart objects which you can completely change in Illustrator or any other vector software What is not included: Any images that consist of human facesFont PT Sans, you can download it from Google Fonts.

About – Collins Brian Collins ECD / Co-founder Over his career, Brian Collins has won every major creative award. His work has been featured in The New York Times, Forbes, Creativity, Fortune, Rolling Stone, Creative Review, Graphis, NBC News, ABC News and Fast Company, which named him one of five American Masters of Design. For ten years prior to the founding of COLLINS, Brian was Chief Creative Officer of the Brand Integration Group (BIG), the design and innovation division at Ogilvy & Mather Worldwide.