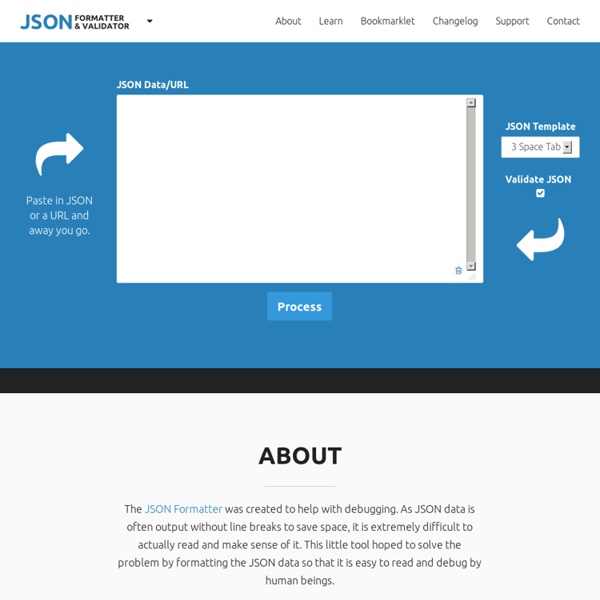 JSONLint - The JSON Validator. User Experience quotes and articles to inspire and connect the UX community | inspireUX from __future__ import * The browser security model dictates that XMLHttpRequest, frames, etc. must have the same domain in order to communicate. That's not a terrible idea, for security reasons, but it sure does make distributed (service oriented, mash-up, whatever it's called this week) web development suck. There are traditionally three solutions to solving this problem. Local proxy: Needs infrastructure (can't run a serverless client) and you get double-taxed on bandwidth and latency (remote - proxy - client). Flash: Remote host needs to deploy a crossdomain.xml file, Flash is relatively proprietary and opaque to use, requires learning a one-off moving target programming langage. Script tag: Difficult to know when the content is available, no standard methodology, can be considered a "security risk". I'm proposing a new technology agnostic standard methodology for the script tag method for cross-domain data fetching: JSON with Padding, or simply JSONP. Let's take the del.icio.us JSON API as an example.

BNOTIONS We laughed, we learned and we connected with hundreds of developers at the jQueryTO 2013 conference in downtown Toronto. The 2-day conference attracted the top talent in the city and beyond, featuring cutting edge presentations and a stellar speaker lineup, which included Paul Irish and Addy Osmani from the Chrome team and some of the biggest names in the jQuery developer community. (Slides for all the speaker’s presentations follow below.) We used Google+ as a social platform during the event and asked everyone to “check-in” and use “party mode,” so we could crowd-source photos from the conference. Over 2 days, more than 150 photos were uploaded from attendees! A collection of great photos from jQueryTO 2013 “A huge thank you to the 500+ devs that stayed to watch my paint performance keynote at +jQueryTO. We want to thank all the volunteers for their help in running an awesome conference. Louis Lazaris – When jQuery and CSS3 3,181 views

25 great free UX tools There might be no such thing as a free lunch but thanks to the wonders of Open Source software, freeware and trial software there most certainly is such a thing as free software. In this article I list 25 great free UX tools, including tools to help with prototyping, annotating, screen grabbing, site mapping, usability testing, accessibility and analytics. Prototyping tools Pencil Pencil is a nice little Open Source tool for creating prototypes, UI mockups, and UX diagrams, such as user journeys. Pencil – A free prototyping and diagramming tool LucidChart LucidChart is an online tool for creating diagrams, UI mockups and prototypes. LucidChart – A prototyping and diagramming tool with a free trial version Balsamiq Balsamiq is another online UI prototyping tool and like LucidChart it’s not fee but does allow you to create simple single pages for free using the trial version (just click on the ‘take a tour’ link). Balsamiq – A prototyping tool with a free trial version Serena Prototype Composer

JSON Frontend Single Point of Failure | Dean Hume At this year's Velocity Europe conference, I watched a great talk by Google's Patrick Meenan about 3rd party scripts and frontend Single Point of Failure (SPOF). A single point of failure is a part of a system that, if it fails, will stop the entire system from working. Quite often, you may add 3rd party scripts such as jQuery, social sharing buttons or Ad tracking scripts to your website with the best intentions, but depending on the way that these scripts are loaded you could potentially create a frontend single point of failure that can block the entire site! If these 3rd party scripts are not implemented and deployed properly they pose a significant risk for the websites that host them. Once you have downloaded and added the plugin to Chrome, simply navigate to your desired webpage. Click on the plugin and you will be presented with a list of the blocking scripts. As you surf the web with this plugin enabled, you may notice how many websites have blocking scripts on their pages!

TeleHash / JSON + UDP + DHT = Freedom Thinking Async Here's the rub: when you load JavaScript from a third party you should do it asynchronously. You might want to load your own scripts asynchronously too, but for this article let's focus on third parties. There are two reasons for this: If the third-party goes down or is slow, your page won't be held up trying to load that resource.It can speed up page loads. At Wufoo, we just switched over to an asynchronous embed snippet. Let's explore this whole async thing. Uhm. There is a little terminology involved here that will help us understand the umbrella "asynchronous" term. "Parser blocking" - The browser reads your HTML and when it comes to a <script> it downloads that entire resource before moving on with the parsing. To prevent problematic parser blocking, scripts can be "script inserted" (i.e. insert another script with JavaScript) which then forces them to execute asynchronously (except in Opera or pre 4.0 Firefox). The HTML5 Way The Classic Async Way Ad Networks Couple of things to note here:

AJAX / JSON Guide Are you at the stage in your AJAX development where using plain text to transfer your data just is not working anymore? And your fed up with all the <?xml buzz? First off lets create our PHP script that will query the database and then print out the data in JSON format. <? // query $sql = “SELECT * FROM table” $result = mysql_query($sql); while( $row = mysql_fetch_array($result) ) { $first_name = $row['first_name']; $last_name = $row['last_name']; $ajax_data = array(‘first_name’=>$first_name,’last_name’=>$last_name); // encode data into json $json = new Services_JSON(); echo $json->encode($ajaxData); } ? Now that we have the JSON being printed out from the above PHP script we can create our JavaScript to read this data and update the page. <! // now we have access to the properties we put in the array alert(person.first_name); } client.makeRequest(phpscript.php,”); I hope this little tutorial puts the fun back into ajax again. Below is a quick list of useful DOM functions for those new to it:

Separating JavaScript download and execution Not too long ago, I wrote a post entitled, Thoughts on script loaders[1], in which I discussed my thoughts on the continuing introduction of script loaders such as LABjs and ControlJS. In that post I also mentioned what I thought was the main problem that led to existence of these libraries. That problem is the inability of the developer to control the download of JavaScript files as separate from its execution. After a conversation with Steve Souders about ControlJS, I put together a proposal for a delayed script execution model in browsers[2]. Background Traditionally, JavaScript execution immediately followed download of the external JavaScript file. As a recap, adding defer to a <script> causes JavaScript to download immediately but hold off on executing until the entire DOM has been loaded (before DOMContentLoaded). Developers discovered that creating a script element dynamically using JavaScript caused a different behavior. The problem Requirements The original proposal Proposal v2.1